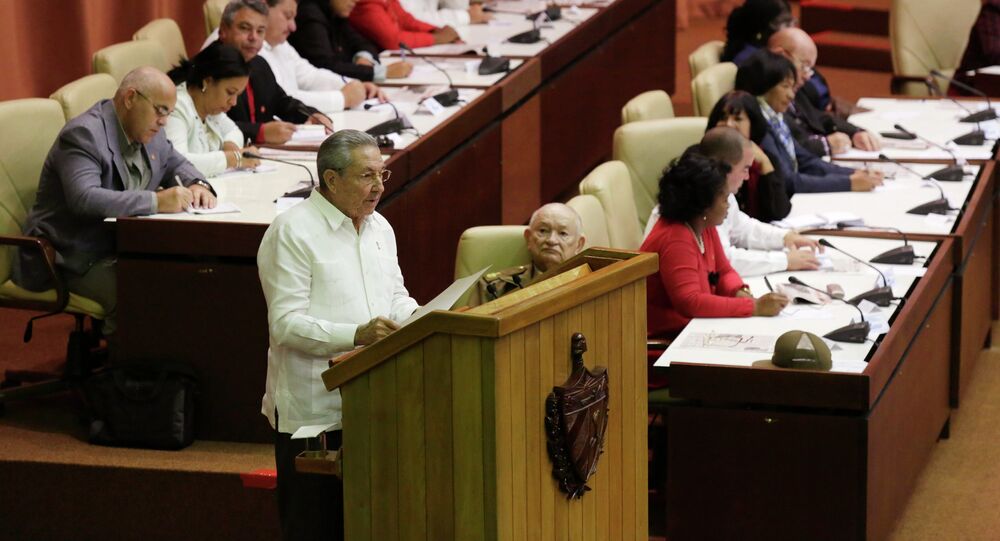 Cuban leader Raul Castro has condemned the US bill, authorizing President Barack Obama to impose sanctions on Venezuelan government officials and supporting Caracas, as the country has special relations with 'this brotherly nation'.

© REUTERS / Enrique De La Osa
Castro: Cuba to Conduct Respectful Dialogue With US But Will Not Give Up Own Ideas
BUENOS AIRES, December 21 (Sputnik) – Cuba condemns the US bill that authorizes President Barack Obama to impose sanctions on Venezuelan government officials and will keep supporting Caracas, Cuban leader Raul Castro has stressed.

"We have special relations with Venezuela. We will continue supporting it amid attempts to destabilize the legitimate government of President [Nicolas] Maduro," Castro said Saturday in a speech before the Cuban parliament and a group of favored guests.

"We renounce attempts to impose sanctions on this brotherly nation," the Cuban president added.

© REUTERS / Enrique De La Osa
Latin American Countries Pressure Affected US Decision on Cuba Policy: Experts
On Wednesday, President Obama announced that the United States was relaxing trade and travel restrictions on Cuba, which has been under a US embargo since 1961 due to Cold War antagonism between Washington and the Communist government in Havana.

On Thursday, US President Barack Obama signed a bill that authorizes him to impose sanctions on Venezuela's current and former government officials for abusing the rights of protesters, who participated in anti-government rallies earlier this year.

In his Saturday speech, Castro said Cuba is ready to engage in a mutually respectful dialogue with the United States, but will not abandon its ideas. The Cuban leader added that there are major differences between US and Havana's views on sovereignty, democracy and international relations.