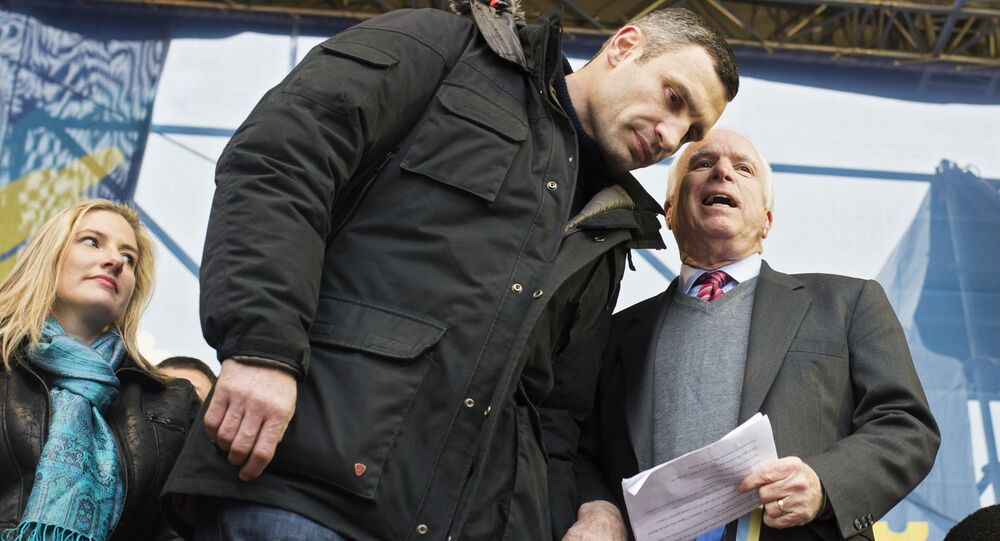 Stratfor: Ukraine Coup Plotted by US Over Russian Stance on Syria

The United States plotted the coup which took place in Ukraine in February 2014 in response to Russia’s policy in Syria, says George Friedman, the founder and CEO of Stratfor, known as "Shadow CIA".

© Sputnik / Vladimir Fedorenko
What is Ukraine Freedom Act, and What Does It Imply?
MOSCOW, December 19 (Sputnik) – The United States is behind the February coup in Kiev, which came in response to Russia’s stance on Syria, said George Friedman, the founder and CEO of Stratfor, a global intelligence company.

Russia has repeatedly said that the coup in Kiev was organized by the US, Friedman told Kommersant newspaper. Indeed, it was the most overt coup in history, the political analyst stressed.

The United States decided to act following Russia’s successes in the Middle East, a key region for the US. Americans saw that Russians could influence what was happening in the Middle East, Friedman said. Russians are one of the many challenges in the region that the US faces, he stated. The US thought Russia’s activities were an attempt to harm Washington, the political analyst told the newspaper, adding that events in Ukraine should be viewed in this context.

Russians seem to have underestimated how seriously the US would react to Moscow’s activities in the region and that they would easily respond, Friedman said. The US understood that the thing Russia wants the least is instability in Ukraine, he added.

© Sputnik / Vladimir Astapkovich
Lavrov: Ukraine Freedom Act to Undermine US-Russia Relations for Long Time
The head of Stratfor, also known as "The Shadow CIA," insisted that Russia’s involvement in Syria was not the only reason for the Ukrainian crisis. However, many in Washington started to perceive Russia as a problem, the expert told the newspaper, adding that at that time the US decided to divert Russia’s attention away from the Middle East.

Syria has been in a civil war since March 2011. Over 100,000 people have died as a result of the armed conflict. Russia repeatedly stated that the election of Syria's president Bashar Assad was legitimate, and that the people of Syria should control their future. From the beginning of the war the US supported the opposition and stated that the conflict would not be over with Assad in power.

Moscow to Maintain Position on Ukraine Amid Pressure