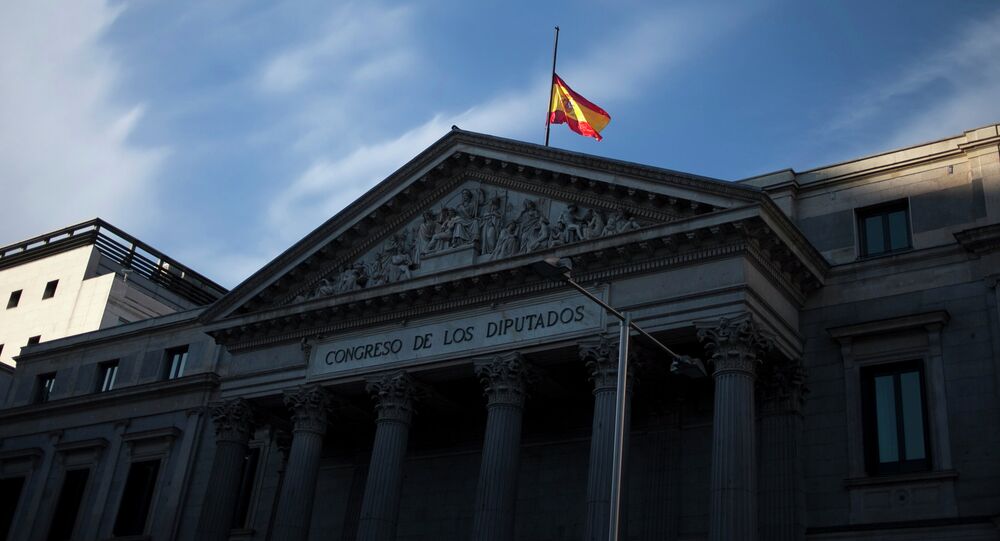 "The conservative-led Spanish parliament passed an anti-protest bill on Thursday against heavy opposition from politicians and activist groups, who say the law violates the right to protest, limits freedom of expression and gives more power to police," Reuters reported.

While 181 parliamentary members voted for the controversial law, 141 voted against the legislation, which has been criticized heavily by major opposition groups in the Spanish Parliament.

The new law, dubbed "Ley Mordaza" or "Gag Law," has set 'draconian' fines for unauthorized protests near buildings "which provide basic services to the community" up to 600,000 euro ($746,000). The law does not specify the term, thus any unauthorized rallies outside of hospitals, universities or the Spanish parliament can be targeted by the new legislation.

© AP Photo / Gabriel Pecot
HRW Calls on Spain to Abandon Bill Restricting Freedom of Speech, Assembly
The bill also prohibits people and civil activists from filming police officers or showing "lack of respect" to law enforcers. The breach of the law will result in fines of 30,000 euro ($37,287) or 600 euro ($745,75), respectively.

The opposition emphasizes that the law marks the return to "Franco Era" – the times of dictatorship and human rights abuse of late 1970s. "Plural Left spokesman Ricardo Sexto suggested Mr. Rajoy’s government wanted to bring back Franco’s Public Order Tribunal, which was charged with the repression of political crimes," The Spain Report media source pointed out.

A public poll released on Wednesday, December 10, indicated that 83 percent of Spanish civilians, including government supporters, opposed the bill.

It is worth mentioning that Spain has already faced increasing street demonstrations against Prime Minister Mariano Rajoy's unpopular austerity programs, however, most of the protests were peaceful.

The socialist PSOE, Spain's main opposition party, has promised to abolish the controversial law if it gains power in 2015 general elections.

It should be noted that international human rights groups have already denounced the Gag Law for its lack of mechanisms to prevent human rights abuses and excesses of power.

Unity of Spain Not to Be Challenged: Spanish PM