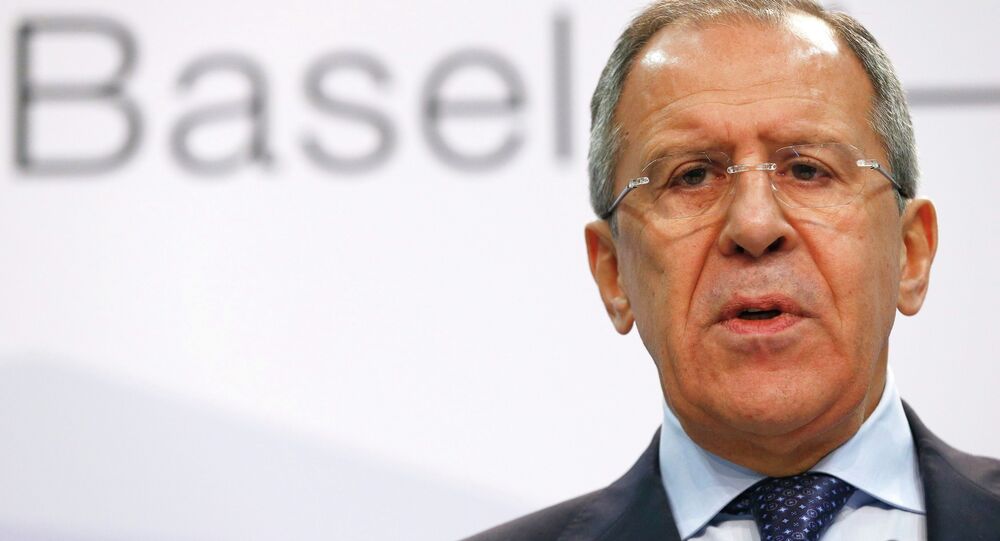 Speaking after talks with his counterparts from member states of the Organization for Security and Cooperation in Europe, Russian Foreign Minister Sergei Lavrov stated that Ukrainian reconciliations negotiations are useless without the participation of self-proclaimed Donetsk and Luhansk republics.

“This is not easy, but it seems to me that now they are close to an agreement,” the minister said following talks with his counterparts from member states of the Organization for Security and Co-operation (OSCE) in Europe.

The 21st OSCE Ministerial Council is taking place in Basel, Switzerland on December 4-5.

"This is outrageous and cynical. I think there are grounds for law enforcement bodies to scrutinize this situation for possible [elements of a] criminal case," he said after the Organization for Security and Co-operation in Europe's (OSCE) Council of Foreign Ministers meeting in Basel, Switzerland.

Ihor Mosiychuk, a paramilitary battalion commander and a lawmaker representing the nationalist Radical Party, commented on the recent clash with militants in Chechnya Thursday by saying that "being in the state of war, Ukraine should encourage opening a second and third front in the Caucasus and Central Asia."

© Sputnik / Andrei Stenin
Far-Right, Ultranationalists Played Crucial Role in Euromaidan: Analyst
In the early hours of Thursday, three cars full of armed militants attacked a road patrol station in Grozny, in Russia's southern Republic of Chechnya. Three police officers died when attempting to stop the cars. The terrorists later found shelter in the city's Press House. The operation that was launched to repel the attack claimed the lives of seven law enforcement officers. Another 28 were injured. All 10 militants that took part in the terror attack were killed in the operation, according to the National Anti-Terrorism Committee.

Later on Thursday, UN Secretary-General Ban Ki-moon strongly condemned the attack and offered his condolences to the people and government of Russia.

"Our Western colleagues… want it this way, they want Russia to speak for self-defense forces in this or that format, but this approach is ideology-laden," he said at a press conference following a foreign ministers' meeting of the Organization for Security and Co-operation in Europe (OSCE) in the Swiss city of Basel.

Ukraine, Russia and the OSCE are currently preparing another round of reconciliation talks between the government in Kiev and militias in Ukraine's eastern provinces of Luhansk and Donetsk.

Previous peace talks took place in early September. The peace process was laid out in the September 5 ceasefire deal agreed in the Belarusian capital of Minsk at a meeting of the Contact Group on Ukraine, which included representatives from Ukraine, the OSCE and Russia. Another round of Minsk talks resulted in a memorandum specifying the implementation of a ceasefire regime.

The armed conflict in Ukraine began in mid-April, when Kiev launched a military operation against independence supporters in the country's southeast.

East News
No Need for OSCE Monitoring of Entire Russian-Ukrainian Border: Moscow
A number of foreign ministers from the OSCE member states agree that recent legal initiatives by the Ukrainian leadership, including the law on vetting of officials, are ill-considered and inhumane, Russian Foreign Minister Sergei Lavrov said Friday.

Speaking about meeting his counterparts from the Organization for Security and Co-operation in Europe (OSCE) member states, Lavrov said he asked whether they approve of the Ukrainian government's actions.

"They replied: of course not, the law on vetting is terrible, the bill to cut the southeast [of Ukraine] from the economic and financial system is ill-considered, harmful, inhumane," the foreign minister said.

© Sputnik / Alexander Maximenko
Ukraine for Sale: Unkept Promises of Maidan
In November, Ukrainian President Petro Poroshenko ordered to stop financing all government institutions in eastern areas that are under the control of anti-Kiev militias. A presidential decree also terminated banking services in the Donetsk and Luhansk regions, freezing the accounts of people and companies, in what a top official in Donetsk described as an economic blockade.

Russia's Foreign Minister Sergei Lavrov later called Poroshenko's decision an attempt to "choke the region" in the wake of another military intrusion. On Wednesday, the director of Human Rights Watch, a global rights watchdog, called on the Ukrainian government to reconsider its decision saying there were vulnerable groups of people in the east whose survival depended on social benefits.

In another controversial move, the parliament of Ukraine adopted a law in mid-September that allows for the so-called "anti-corruption screenings" for about one million public officials, law enforcement agents and the entire Cabinet. A UN report in November raised concern about the vetting guidelines, which it said did not comply with international standards in that the law established "overly broad" vetting grounds and a principle of collective responsibility.

Foreign chiefs of Ukraine, Russia and OSCE member states are currently meeting in the Swiss city of Basel to prepare another round of reconciliation talks between the government in Kiev and militias in Ukraine's eastern provinces of Luhansk and Donetsk.

Lavrov: Only Direct Dialogue Between Kiev, Donbas to Bring Results