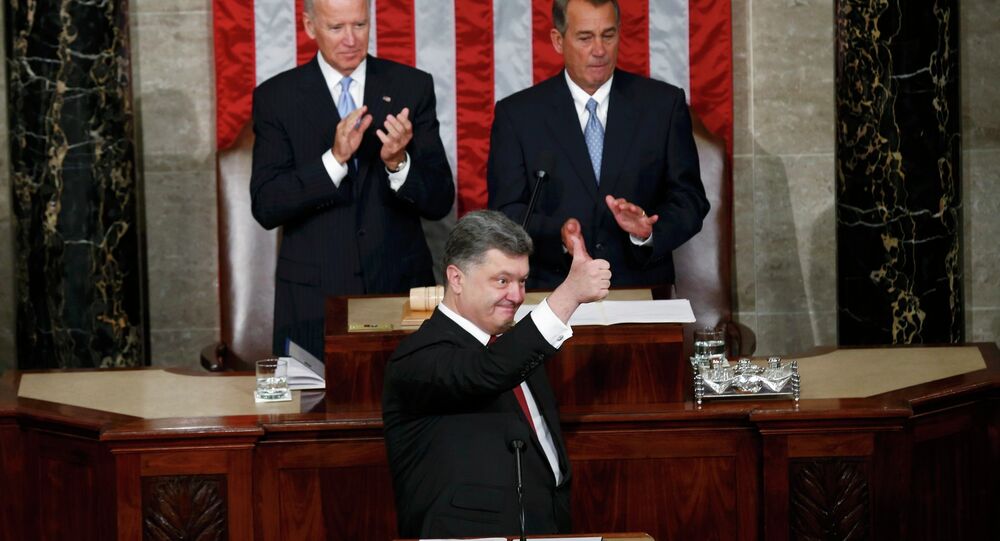 US Should Arm Ukrainian Military to Stabilize Situation: Congressman

A member of the US Republican Party Adam Kinzinger stated that the Congress supports the idea to provide Ukraine all necessary military aid to 'give them the ability to defend themselves'.

WASHINGTON, December 3 (Sputnik) – Washington should provide military equipment to the Ukrainian army to settle the current situation, and the new Congress is very united behind Ukraine, US Rep. Adam Kinzinger, a Republican, told Sputnik Tuesday.

"We've made it very clear that this [US President Barack Obama's] administration should arm the Ukrainian military, give them the ability to defend themselves," Kinzinger, who is also a member of the House Foreign Affairs Committee said.

In September, Ukraine's President Petro Poroshenko requested lethal military assistance from the Obama administration. The White House has so far refused to grant it. Last week, Pentagon spokesperson Rear Adm. John Kirby announced that the defense department continues to evaluate all Ukrainian requests for military assistance, but with the focus on the non-lethal aid.

The United States should also make it clear that "any encroachment on any member of NATO will be seen as a violation of Article 5 [of the North Atlantic treaty]," the Illinois congressman added saying that if achieved, "it will much stabilize the situation."

Adam Kinzinger also stressed that "nobody is looking for direct confrontation with the Russian military, unless the Russians are," adding that it has to be clear that both Republicans and Democrats in Congress are united "behind Ukraine."

The United States would be willing to be partners with Russia again, but does not think that Moscow wants that right now, Kinzinger added.

"If the Russians decide that they want to deescalate [the crisis in eastern Ukraine] and become friends with the United States and NATO again, I think we'd welcome them with open arms. But under the current situation it sure does not appear that's what they are interested in," he explained.

Relations between Russia and the United States have been tense, and deteriorated amid the Ukrainian crisis. Over the past several months, the United States, the European Union and a number of their allies introduced a range of sanctions targeting Russia's banking, energy and defense sectors over Moscow's alleged involvement in the escalation of the Ukrainian crisis. In response, Russia introduced embargo on imported food for those Western countries which announced restrictions against it.

Washington Not Involved in US National Appointment as Ukraine’s Minister