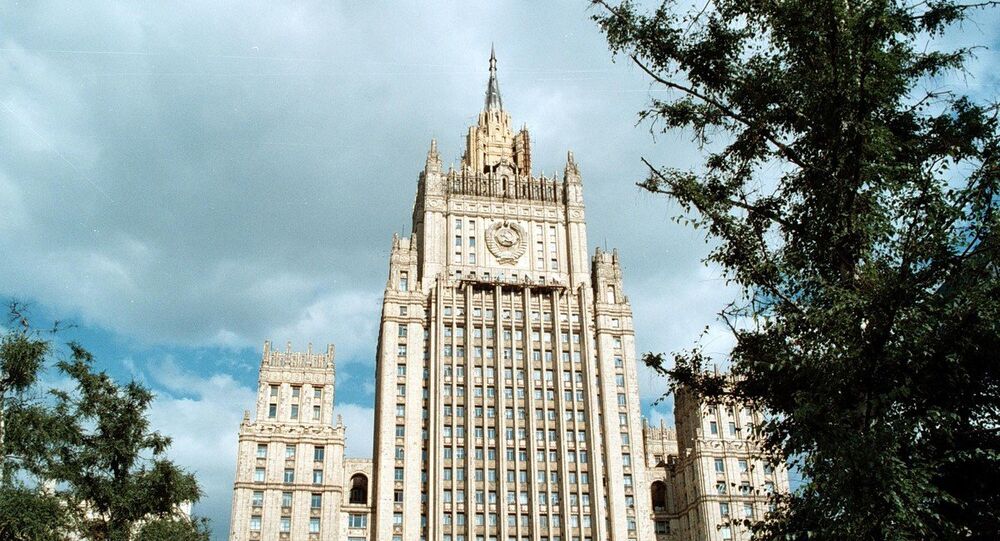 No Need for OSCE Monitoring of Entire Russian-Ukrainian Border: Moscow

The OSCE currently monitors only two checkpoints at border crossings in Ukraine’s Donetsk and Luhansk regions.

"We do not see the need for an extension of the [OSCE] monitors' mandate to the whole section of the border with Donetsk and Luhansk [people's republics], as it does not correspond to the Berlin declaration adopted on July 2 this year, according to which the OSCE is monitoring the border," Lukashevich said on the threshold of a OSCE ministerial council meeting.

The Foreign Ministry spokesperson said that Russia has approved the extension of the OSCE observers' work at the Russian-Ukrainian border crossings Donetsk and Gukovo until December 23, and an increase in the number of monitors to 22.

The OSCE monitoring mission was deployed to the region in March, at the Ukrainian government's request.

Russia agreed in July to allow OSCE monitoring of its Gukovo and Donetsk checkpoints on the Russian-Ukrainian border to ensure the transparency of border traffic between Russia and the self-proclaimed Donetsk and Luhansk people's republics in southeastern Ukraine.

Moscow Not Satisfied With MH17 Investigation

© REUTERS / Antonio Bronic
MH17 Wreckage Headed for Dutch Air Base for Probe: Dutch Safety Board
Moscow is not satisfied with how the flight MH17 crash in Ukraine is being investigated, including the Dutch decision not to inspect some of the plane’s wreckage, Alexander Lukashevich said.

“We are still very unsatisfied with the process of the Malaysian Boeing crash investigation,” he told reporters.

The spokesman added that Russia is particularly concerned over a Dutch authority responsible for this investigation's lack of interest in "significant portion of plane fragments, including those bearing signs of shrapnel."

On Monday, the Dutch Safety Board said the wreckage of the downed Malaysia Airlines MH17 plane will be loaded onto trucks and transported by road to the Netherlands for investigation this week.

According to a preliminary report issued by the Dutch Safety Board in September, the plane most likely broke up in mid-air because of structural damage from a large number of high-energy objects that penetrated the aircraft from the outside.

Kiev has accused independence supporters in eastern Ukraine of shooting the plane down, while local militia leaders say that they do not have weapons capable of striking an aircraft flying at 32,000 feet.

"The West's refusal to continue military cooperation with Russia on the pretext of differences in the approaches to the events in Ukraine limits the prospects for the development of predictability and transparency measures in the military sphere," the official said.

Following Crimea's reunification with Russia in March, NATO has boosted its military presence in Poland and in the former Soviet Baltic states of Latvia, Lithuania and Estonia.

In April, the military bloc froze its cooperation with Russia, maintaining only contacts at the ambassadorial and above.

Top NATO officials have repeatedly accused Russia of meddling in the Ukrainian internal conflict and even of a direct military intervention in its neighbor. Moscow has dismissed the claims as groundless.

OSCE Should Address Problem of Statelessness in Baltic States

"The OSCE should take serious steps to ensure the rights of national minorities and to solve the problem of statelessness," Lukashevich said.

He called on the OSCE High Commissioner on National Minorities Astrid Thors "not to ignore the situation of the Russian-speaking population in the Baltic states” and to “work with governments to implement the recommendations of the OSCE and the Council of Europe."

According to Lukashevich, the fact that statelessness still exists in modern European states like Latvia and Estonia is "humiliating."

Lukashevich noted that Moscow considers the growth of neo-Nazism, aggressive nationalism, anti-Semitism and xenophobia in a number of OSCE states to be unacceptable.

Vladimir Astapkovich
Lavrov Urges OSCE to Prevent Emergence of New Forms of Racism in Europe
The interview comes on the threshold of an OSCE ministerial council meeting scheduled for December 4-5, in which Russian Foreign Minister Sergei Lavrov is to take part.

At an OSCE meeting in Warsaw in October the Russian delegation drew attention to the most pressing humanitarian and human rights issues in the OSCE’s member states. These include questions of mass statelessness and the infringement of the rights of the Russian-speaking population in the Baltic countries, the glorification of Nazism and former Nazis and collaborators, the death of journalists in armed conflicts, the problems of human trafficking for the extraction of organs and tissues, as well as the growth of nationalism in a number of countries.

Removal of Children From Russian Families in Scandinavia Unacceptable

Moscow will not tolerate the removal of children from Russian families in Scandinavian countries, Alexander Lukashevich said.

© Sputnik / Alexey Filippov
Problems With Russian Children in Norway Require Solution
"We will continue to raise issues related to the exercise of their [children's] rights, including those born from mixed marriages. We cannot tolerate outrageous cases of removal of children from families of Russian citizens in certain Scandinavian countries," he stressed.

According to the official, the issue of child protection has been unfairly ignored by the OSCE. The spokesman stressed that the organization should "focus on the children's rights protection and strengthen commitments in this area."

On November 6, Russian children's rights commissioner Pavel Astakhov said the issues regarding the removal of children from Russian families in Norway must be solved at the intergovernmental level. Astakhov pointed out that Russia and Norway do not have a mechanism of communication for the resolution of family and children's issues, suggesting that such a commission should be established.

In October, Norway's Child Welfare Services reportedly picked a 5-year-old son of a Russian couple from school and placed him into protective custody, claiming that his mother knocked out one of his loose baby teeth. The mother, though, insisted that the incident happened accidentally while she was helping him undress.

According to the office of Astakhov, over the past three years, 55 children were removed from Russian families in Norway and 74 such cases were reported in Finland.

“It is inadmissible that the deployment [of US troops] on Afghan soil brings threats to other governments. We continue to believe that the further deployment of US troops and their NATO allies in Afghanistan, that are now scheduled to remain until the end of 2016, needs an appropriate UN Security Council resolution in which the parameters of the operation and the mechanisms of its reporting are defined,” Lukashevich said.

Earlier in November, US media reported that US President Barack Obama had secretly ordered an extension of the country's mission in Afghanistan and allow US troops to fight the Taliban.

According to the previous statements by the White House, the remaining US troops in Afghanistan were supposed to train the Afghan military and to have no combat role in the country in 2015. In May, Obama announced his intention to withdraw all US troops from Afghanistan by the end of 2016.

The security agreement between Afghanistan and the United States was signed on September 30, setting forth that the United States would reduce its military presence by up to 9,800 personnel by 2015, and withdraw fully by the end of 2016.

Despite the first democratic elections in the country's history held in June, Afghanistan is still fighting the Taliban and other insurgent groups, that control large swathes of the Central Asian country. The Taliban government was overthrown in the 2001 US-led invasion of Afghanistan.