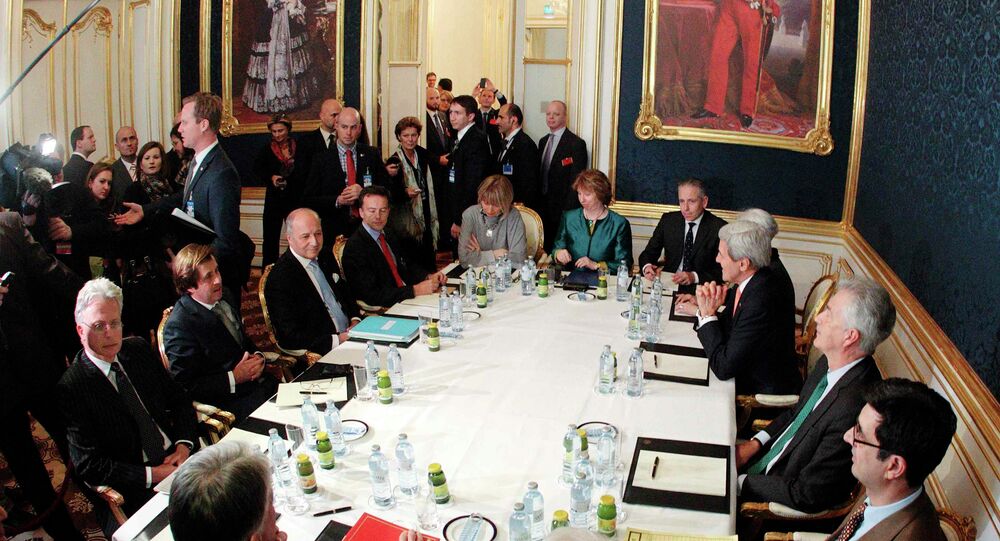 © AP Photo / Joe Klamar, Pool
Great Progress Made, New Ideas to Be Discussed: Iran Talks End Without Deal
VIENNA, November 25 (Sputnik) — The final draft of a comprehensive nuclear agreement on the Iranian nuclear program could be finalized in the near future, Russia's main negotiator in the talks said Tuesday.

"Of course, we will still have to put some serious effort to coordinate technical details, but the main document, I think, will soon be at the final stages of preparedness," Deputy Foreign Minister Sergei Ryabkov said.

The latest round of talks on the Iranian nuclear issue between Tehran and the P5+1 group of international negotiators, which comprises Russia, the United States, the United Kingdom, France, China and Germany, was held in Vienna on Monday.

The participants agreed to extend the deadline for reaching the deal until July 1 next year and to resume negotiations in the next few weeks.

Ryabkov also stressed the efficiency of the latest round of negotiations between Tehran and P5+1. "The last four days were more productive in terms of adopted decisions than the last four months," Ryabkov said.

© East News / AP Photo/Joe Klamar, Pool
More Work Required for P5+1, Iran to Reach Nuclear Program Deal: Ashton
"The remaining issues are so obvious that we are hoping the announced postponement is certainly the last one," the diplomat added.

According to Ryabkov, the negotiating sides managed to reach a convergence of views and it is not an exaggeration, when senior officials in different countries say that significant progress was made during the talks.

Before the new deadline for reaching the comprehensive deal regarding the Iranian nuclear program was announced, there was much speculation as to whether or not the talks would be continued if the ministerial meeting failed to land an agreement.

West Will Fail in Trying to Bring Iran ‘To Knees’: Khamenei