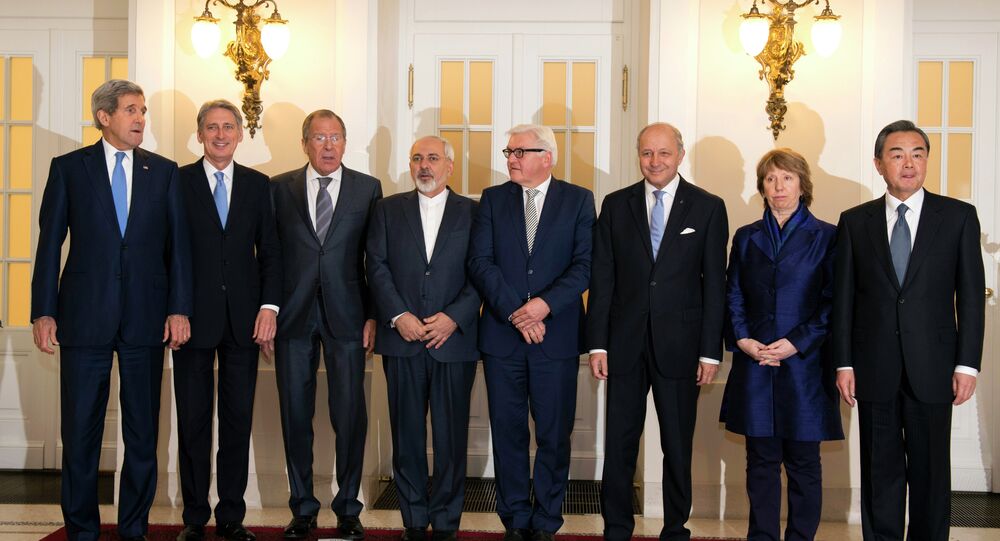 The negotiations on the Iran's nuclear issue has been terminated without the much expected comprehensive final agreement, but significant progress has been achieved.

VIENNA, November 25 (Sputnik), Daria Chernyshova — Talks over the Iranian nuclear program have come to a close in Vienna without reaching the much anticipated comprehensive final deal.

"Unfortunately we have not reached as much as we and I wanted. We have made steps, there are new ideas on the table," German Foreign Minister Frank-Walter Steinmeier said Monday following the P5+1 meeting with Iran.

His French counterpart Laurent Fabius reiterated that the new proposals will require careful inspection and negotiators "need more time to examine" them.

The sextet of international mediators and Iran agreed to extend the Geneva agreement until the end of June, and will seek to reach a draft deal by March 1.

Despite the failure to strike a comprehensive agreement, the sides made significant progress during the nuclear talks, Russian Foreign Minister Sergei Lavrov said Monday.

"Talks on Iran have been conducted for quite a while, but they received a powerful impetus last year, when a joint action plan was agreed in Geneva. This plan has been strictly observed this year," Lavrov said.

"This allowed us to make significant progress in approaching the final agreement. It is yet to be reached, but the progress is significant," the Russian foreign minister told reporters.

Last week, when this round of talks started in the Austrian capital, the arrival of ministers depended on the progress achieved by the negotiating teams. Initially, the contentious issues included the Arak reactor, sanctions and uranium enrichment.

The Ministers arrival in Vienna signified that progress was being made. However, much has remained behind the closed doors of the Palais Coburg where the talks and meetings were held.

November 24 is a benchmark date for Iran, as although a final deal was not struck, it is the closest the sides have come to finding an agreement after a 12-year standoff.

What matters for Iran is that the status quo has been preserved and no sanctions were imposed or re-imposed on Tehran. Now the goal is to restore Iran's international status.

"The price for Iran is huge: access to a very large amount of frozen assets, the ability to trade freely […] and the ability to reset relationships with the international community," UK Foreign Secretary Philip Hammond noted.

Iran is currently subject to a number of sanctions implemented by the UN Security Council, as well as economic sanctions by the European Union, the United States, and other countries. But once reached, the deal would see sanctions lifted and assets unfrozen.

Further talks promise to be tough, as the US Secretary of State noted. Speaking after the talks ended on Monday, he highlighted that a lot had been achieved over the last year of negotiations and that the "world is a safer place now that it was a year ago," as Iran has significantly rolled back its nuclear program.

"These talks are not going to get easier just because we extend them. They're tough. They've been tough. And they're going to stay tough," John Kerry said.

The talks are expected to resume shortly with experts and negotiating teams at the helm, according to officials.

But the world remains hopeful that a comprehensive deal will be reached as the talks proceed.

Last year, the negotiating countries agreed to strike a long-term deal with Tehran by July 2014 that would guarantee the peaceful nature of the Iranian nuclear program, however the deadline was later extended to November 24.

Lavrov: 'Significant Progress' Made in Nuclear Talks With Iran