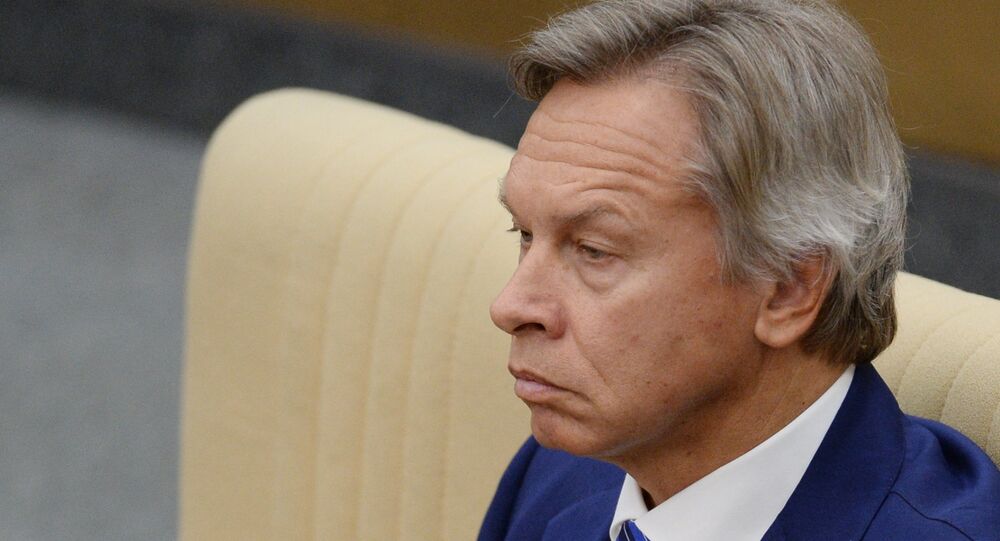 The United States, Canada and Ukraine have isolated themselves by voting against a Russian proposed resolution condemning the glorification of Nazism, Russian lawmaker Aleksey Pushkov stated in a Twitter post.

MOSCOW, November 23 (Sputnik) — The United States, Canada and Ukraine have isolated themselves by voting against a resolution condemning attempts to glorify Nazism ideology passed by the UN General Assembly’s Third Committee, stated Aleksey Pushkov, the head of the foreign affairs committee in the State Duma, the lower house of the Russian parliament.

“Who is who! The US, Canada and Ukraine are in isolation: only this trio voted in the UN against the Russia-proposed resolution condemning Nazism,” Pushkov said in a Twitter post, adding that 115 nations supported the initiative.

The United States, Canada and Ukraine were the only three countries to vote against the resolution supported by the majority of  UN members on Friday.

The Russian Foreign Ministry has referred to Ukraine’s position on the resolution as “particularly deplorable and alarming.”

“It is hard to understand how the country, whose people have fully experienced the horrors of Nazism and made a remarkable contribution to the overall victory over it, can vote against a document condemning the  glorification of Nazism,” said an announcement released by the ministry's information and press department.

“By voting against the Russian proposed resolution combating the glorification of Nazism, the US, Canada and Ukraine seem to have regressed to childhood,” said Frantz Klintsevich, first deputy head of the United Russia Party, adding that only an irrational child acts out of spite when something is not to his or her liking.

Irina Yarovaya, head of the Russian parliament’s security and anti-corruption committee, stressed that there cannot be different opinions on combating Nazism and fascism, adding it is an issue of participation or nonparticipation in the crimes against peace and humanity. “Russia is trying to save the world from Nazism,” she said, according to a news release on the United Russia Party website.

Member states voiced their concern over the rise of nationalism and xenophobia and an increasing number of race-based hate crimes around the world.