During his visit to Kiev, US Vice President Joe Biden announced that Washington will commit $20 million to support Ukraine's comprehensive reforms and provide an additional $3 million to the UN World Food Program emergency operation in the country. 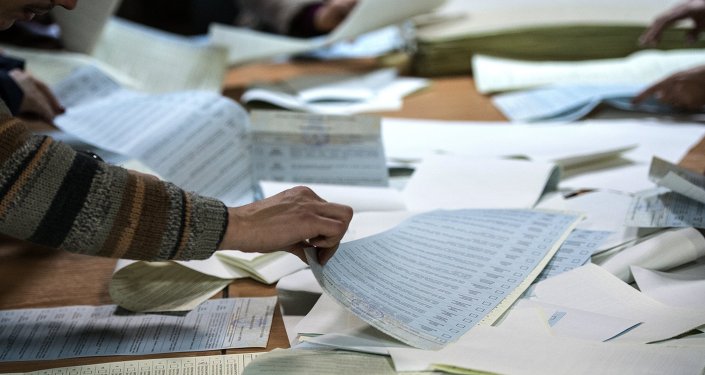 © Sputnik / Ramil Sitdikov
Ukrainian Elections Show Hope for Western Aid Money: Former US Official
WASHINGTON, November 21 (Sputnik) — The United States is going to give Ukraine an additional $23 million in aid to help Kiev with implementation of reforms and EU integration, as well as in its fight against corruption, the White House said Friday.

Biden made his announcement of the upcoming aid package in Kiev, which was the second stop of his five-day trip to Ukraine, Morocco and Turkey.

"The Vice President also announced that the US will be directing an additional $3 million to the UN World Food Program emergency operation in Ukraine for food rations and assistance to people displaced by the conflict in eastern Ukraine and other vulnerable populations," the statement went on to say.

The United States has already pledged almost $320 million in assistance to Ukraine in 2014, including this new commitment. In May, Washington issued a $1 billion sovereign loan guarantee to stabilize Ukraine's economy after it was crippled by months of protests and a military conflict in the southeast.

The White House has been actively boosting Ukraine's military capability, pledging over $118 million in equipment and training to its security forces. Last week, US Senator Rep. John McCain called again on the Obama administration to also provide Kiev with lethal military aid to help it crack down on militias in the southeast.

Ukraine has been torn by a conflict after the caretaker government in Kiev announced in April the start of a massive military operation in the eastern Donetsk and Luhansk provinces. The offensive triggered a humanitarian crisis in the affected areas, prompting Russia to send in several humanitarian convoys with food, fuel and medicine.