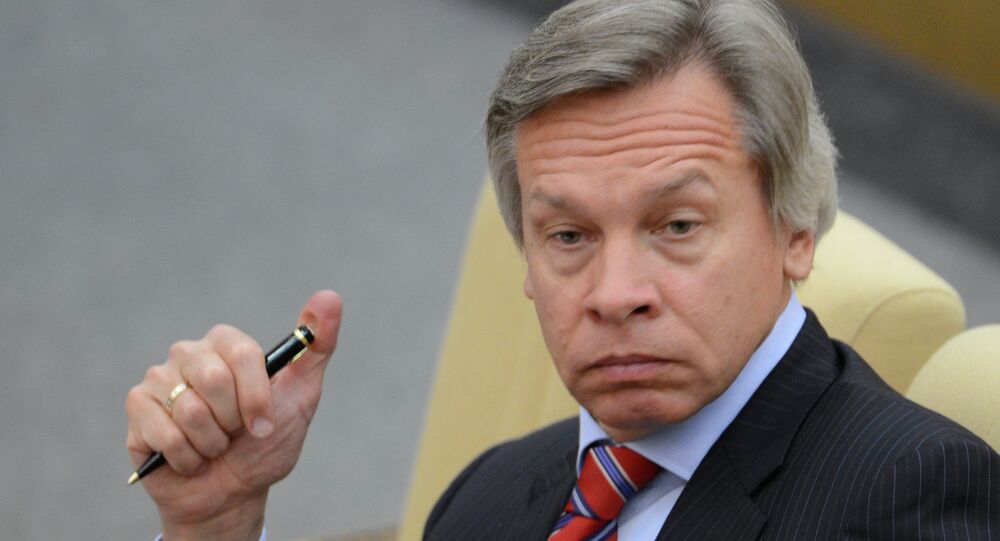 "Russia's actions in Ukraine are of no threat to American security, economy or US citizens. If [US President Barack] Obama can name at least one such threat, I'd like to listen… Russia poses a threat to US hegemony in the world," the head of the Foreign Affairs Committee of the Russian State Duma (the lower house) said at a press conference held at Rossiya Segodnya press center.

"International terrorism is a greater threat for the United States that the actions of Russia, which, by the way, is cooperating with them [the United States] on this fight," Pushkov added.

The United States has recently called Russia a threat to global security, alongside the deadly Ebola virus outbreak and the threat from the jihadist group Islamic State.

However, as Pushkov stated, US militaristic policies in the Middle East could make Obama an eligible candidate for "the Nobel War Prize" if such award existed.

"We see that Obama is hiding the US ongoing war-mongering, militaristic polices in the Middle East by anti-war rhetoric. In other words, the winner of the Nobel Peace Prize could have been awarded by "the Nobel War Prize", if such an award existed," Pushkov said.

President Obama was awarded the Nobel Peace Prize in 2009. There was widespread criticism of the Nobel Committee's decision as Obama was the commander-in-chief of a country at war in Iraq and Afghanistan at the time.

Military Agreements Between China, US Do Not Preclude Conflict: Lawmaker