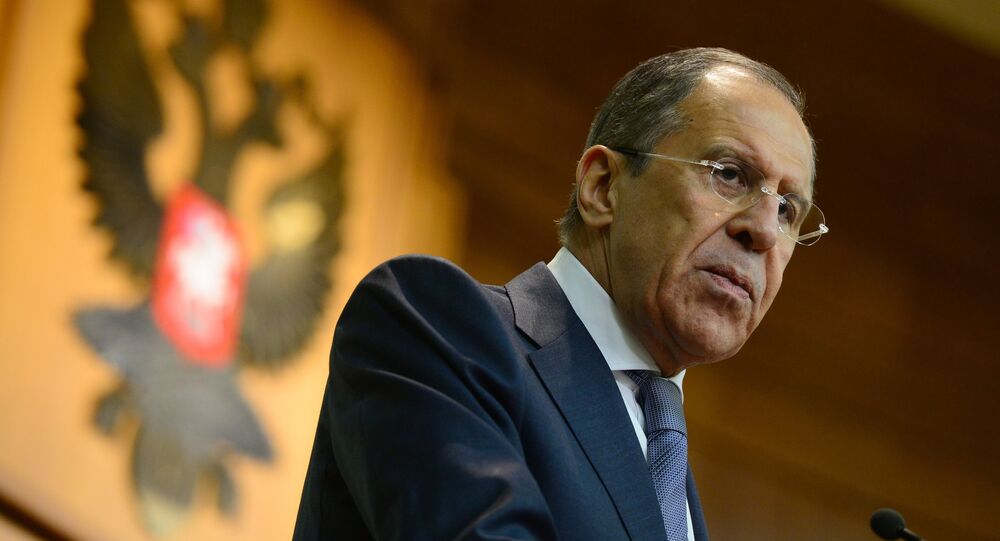 Russian Foreign Minister Sergei Lavrov stated that Moscow has called for stable contacts between Kiev and representatives from eastern Ukraine as a first step in solving the Ukrainian crisis.

MOSCOW, November 19 (Sputnik) – Moscow is calling for the establishment of stable contacts between Kiev and representatives from eastern Ukraine as a first step in resolving the Ukrainian crisis, Russian Foreign Minister Sergei Lavrov said Wednesday.

"As the first step, we call to set up stable contacts between Kiev and representatives of Donbas with the goal of reaching mutually acceptable agreements," Lavrov said during a meeting in the lower house of parliament.

"The West needs to stimulate this process and stop trying to blindly support everything the 'war party' in Kiev is doing, closing its eyes on the heinous breaches in human rights, outright criminal activity and military crimes," Lavrov added.

Moscow has been urging the parties involved in the military conflict in eastern Ukraine to establish a direct peaceful dialogue since the beginning of the special operation by Kiev authorities launched in mid-April to suppress the growing independence movement in the Donetsk and Luhansk regions.

On September 5, the so-called Contact Group on Ukraine met in Minsk, where a breakthrough ceasefire agreement was reached between Kiev and representatives from the self-proclaimed Luhansk and Donetsk people's republics with the mediation of Russia and the European Union.

However, since its establishment, both sides have accused each other of multiple violations of the truce.

In September, Amnesty International Secretary General Salil Shetty said that Kiev is responsible for the war crimes and human rights violations committed by Ukrainian volunteer battalions, such as Donbas, Azov and Dnipr.

Attempts to paint Russia as a party in the Ukrainian crisis is counterproductive with no chance to survive, Russian Foreign Minister Sergei Lavrov said Wednesday.

“This is an absolutely counterproductive and provocative policy that has no chance for survival,” Lavrov said during a government meeting in the lower house of parliament.

"The decision in itself of depriving retirees of their pensions and those who are eligible to receive social financing, depriving them of these benefits, this is already a tragedy for these people, it puts them in an already difficult situation, but there is a school of thought that this [decision] is an attempt to not only economically and socially choke the region, but also to lay the ground for another military intrusion and another attempt to solve the issue using force," Lavrov said during a government meeting in the lower house of parliament.

Lavrov's comments follow Ukrainian President Petro Poroshenko orders on Saturday to stop financing and shut down all government institutions in eastern areas that are under the control of anti-Kiev militias. The decree also terminated banking services in the Donetsk and Luhansk people's republics (DPR and LPR), freezing the accounts of people and companies, in what DPR prime minister described as an economic blockade.

The measure has effectively cut government funding of pensions and social benefits to everyone in the region, leaving schools, health organizations and emergency services stranded.

Poroshenko also tasked the cabinet with drafting a regulation that would switch energy deliveries to households in the southeast to a prepayment scheme.

This comes amid Kiev's claims that it is not gearing up for an offensive against the restive southeastern provinces, which declared their independence in spring 2014.

Ukraine's Prime Minister Arseniy Yatsenyuk said last week that energy supplies for Donbas would be prepaid from funds earmarked for social benefits and pensions. Yatsenyuk also said that Kiev would seek financial compensation after regaining control over the region.

The conflict in the country's southeast escalated in mid-April when Kiev launched a military operation against independence supporters in the regions of Donetsk and Luhansk, after they refused to recognize the new government which came to power as a result of the February coup.

The West is doing everything it can to stop cooperation on exchanging military information, Russian Foreign Minister Sergei Lavrov said Wednesday referring to the Vienna Document on confidence-building measures in the military sphere.

"There is a lot of information on our armed forces that is secret, but bases and who is deployed where is not something we need to hide because we're on our territory and we're not planning to go further than our western partners in regard to transparency or information exchange, but they are doing everything possible in order to cease this cooperation," Lavrov said during a government meeting in the lower house of parliament.

The Vienna Document of Confidence- and Security-Building Measures was adopted in 1990 and has been revised several times since, with the latest version revised 2011. It envisages the exchange of information on military forces by the document's signatory states. The information is exchanged annually and provided to all participating states by December 15.

Relations between Moscow and Beijing is a key factor in maintaining strategic stability and security on the planet, Russian Foreign Minister Sergei Lavrov said Wednesday.

"The developments in the world give a vivid demonstration that the link between Moscow and Beijing is one of the key factors in keeping stability and security on the planet, creating a stable multi-polar world order, providing the supremacy of rights in world affairs and the democracy of international relations," Lavrov said at a meeting in the State Duma, Russia's lower house of parliament.

Last month, State Duma Speaker Sergei Naryshkin stressed that Russia and China's close coordination in international affairs serves as a deterrent to the destructive policies of a number of Western countries.

Relations between Russia and China have lately been actively developing. Earlier this month, Russian President Vladimir Putin stressed that increasing cooperation with Beijing is one of Russia's top foreign policy priorities. The Russian leader also stressed that the bilateral relations have reached "the highest level of comprehensive equitable trust-based partnership and strategic interaction in their entire history."

Lavrov: Russia's Active Ties With Asia Not Alternative to Relations With West

Russia's active relations with Asia are not a substitute for those with the West, Russian Foreign Minister Sergei Lavrov said Wednesday.

"The eastern vector of our policy is not understood as an alternative to relations with the West, but as a factor of creating the principle of a multi-vector in our work on the international arena. This gives greater stability to the positions of the country in the world," Lavrov said during a meeting in the lower house of parliament.

Russia's top diplomat noted that differences in opinion between Russia and the West are objective but Moscow is prepared to find compromises "based on equal rights" and without "blackmail or dictatorship."

Relations between Russia and the West began to deteriorate dramatically since the beginning of the Ukrainian conflict.

The United States, the European Union and their allies have introduced several rounds of sanctions targeting Russia's banking, energy and defense sectors, as well as a number of high-ranking officials in retaliation to what they called Russia's aggressive policy in Ukraine.

Russia has repeatedly denied the allegations and called the sanctions counterproductive, acknowledging that the countries of the Asia-Pacific region, along with Africa and Latin America show the greatest prospects for investment cooperation, and that Moscow might change the structure of its trade missions to suit current trends.

Differences in opinion between Russia and the West have an objective character, but Moscow is prepared to find compromises based on equal rights, Russian Foreign Minister Sergei Lavrov said Wednesday.

"We of course acknowledge that there are differences in opinion and many of them have an objective character and reflect the actual discrepancies in legitimate interests, but we are ready to bring our position closer and find a compromise," Lavrov said during a government meeting in the lower house of parliament.

"Of course, this means on the basis of equal rights and taking into consideration the interests of each other, as well as on the basis of avoiding attempts of blackmail and dictatorship," Lavrov added.

The top Russian diplomat also stressed that attempts to paint Russia as a party in the Ukrainian crisis are counterproductive and have no prospects.

Relations between Moscow and the West deteriorated following Russia's reunification with Crimea in March. The European Union, the United States and a number of their allies have imposed several rounds of sanctions against Russia, accusing it of aiding pro-independence forces of eastern Ukraine and even of a direct military intervention.

"I don't think that these two countries' joining the Shanghai Cooperation Organization will erode it in any way or lessen the role of Russia or China. There's no need to fear serious, responsible, large and growing partners," Lavrov said during a meeting in the lower house of parliament.

He stressed it was important for non-Western countries to rely on their strengths rather than on the bloc mentality to boost their global standing.

The SCO is a Eurasian political, economic and military alliance founded in 2001 in Shanghai by the leaders of China, Kazakhstan, Kyrgyzstan, Russia, Tajikistan and Uzbekistan. India, Iran and Pakistan, as well as Mongolia and Afghanistan have the status of observer countries in the organization, while Belarus, Turkey and Sri Lanka are considered dialogue partners.

In September, Iranian Ambassador to Uzbekistan Ali Mardani Fard told journalists his country was looking to become a full member of the SCO. Its application has been frozen due to Tehran's decades-long standoff with the West over its controversial nuclear program.

Lavrov's Visit to Vienna Depends on Results of P5+1 Talks

Lavrov Hopes 'Point of No Return' Between Russia, EU Not Reached