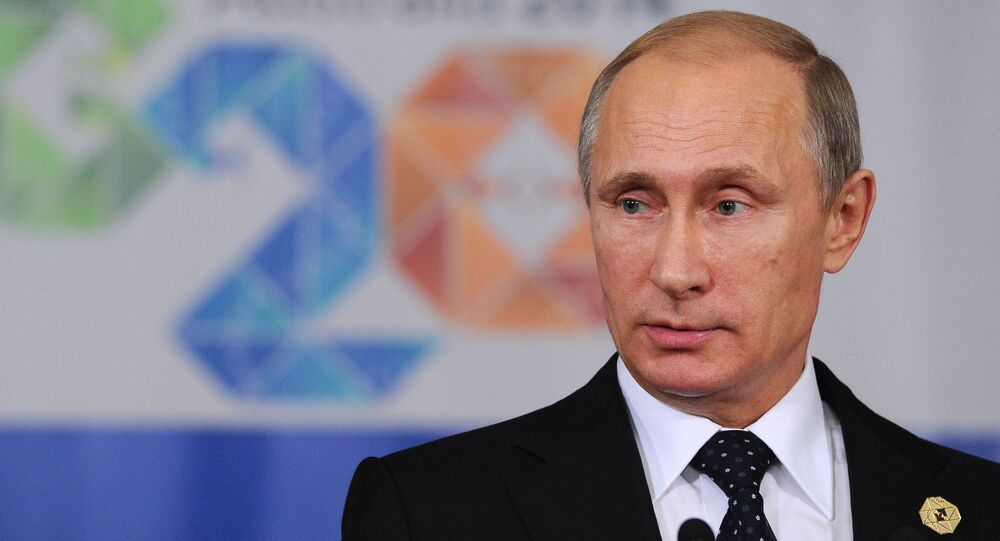 Russian President Vladimir Putin has called the decree issued by Ukrainian President Petro Poroshenko, which set up an economic blockade of Donbas, a "mistake". G20 Leaders discussed the Ukrainian crisis at a series of bilateral meetings, with no official talks having been held on the issue.

BRISBANE, November 16 (Sputnik) – Russian President Vladimir Putin told journalists Sunday that the decree issued by his Ukrainian counterpart Petro Poroshenko, which set up an economic blockade of Donbas (Ukraine's southeastern regions), is a mistake and an untimely move.

"From the media I've learned that the president of Ukraine has issued a decree, essentially establishing an economic blockade of the Donetsk and Luhansk regions. I think that it is a big mistake, because they are cutting off these regions with their own hands," Putin said, adding, however, that the situation could be changed.

"…if they want to save up, this is not the case and not the time to do it," the Russian President emphasized.

G20 Leaders discussed the Ukrainian crisis only at bilateral meetings, with no official talks having been held on the issue, but some understanding on the situation in Ukraine has been reached, Vladimir Putin told.

"At official discussions within the framework of the G20 the Ukrainian issue was not brought up at all, it was not even mentioned, but all bilateral meetings were actually devoted almost exclusively to the problems in Ukraine," Putin said, adding that the talks on the situation in Ukraine allowed everyone to reach better understanding.

G20 Has ‘General Understanding’ That Sanctions Harm Everyone

A general understanding exists within the G20 group that sanctions imposed by the West against Russia over its alleged involvement in the situation in Ukraine hurt everyone, Vladimir Putin said.

"We discussed [sanctions] at bilateral meetings, talked a lot about the Ukrainian issue. Sanctions harm everyone, there is a general understanding of that, that this thesis is the only acceptable one," Putin told journalists.

During the past few months, several rounds of economic sanctions have been implemented against Russia by the European Union, the United States and their allies over Russia's alleged involvement in the Ukrainian crisis — a claim Moscow has repeatedly denied.

In response to the restrictive measures Moscow limited food imports in August from the countries that adopted the anti-Russia sanctions, including the United States, EU member states, Canada, Australia and Norway.

Moscow has also stressed that sanctions "threaten international peace and stability", run counter to the principles of international law and hurt not only the target country, but also those, using the restrictive measures.