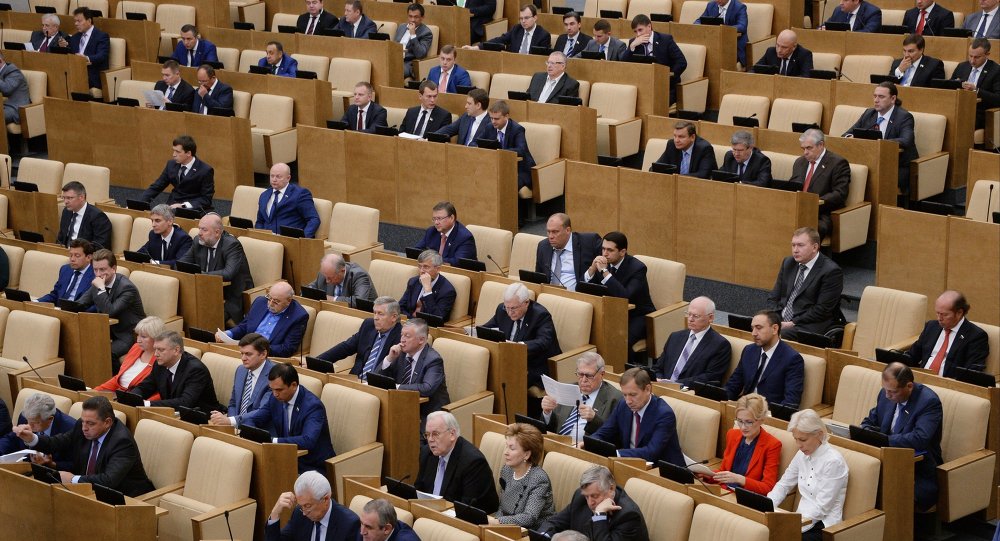 The Russian State Duma adopted in the third reading on Friday a law banning the propaganda or public demonstration of symbols of organizations that collaborated with Nazis or are in denial of the rulings made at the Nuremberg Trial.

MOSCOW, October 24 (RIA Novosti) - The Russian State Duma adopted in the third reading on Friday a law banning the propaganda or public demonstration of symbols of organizations that collaborated with Nazis or are in denial of the rulings made at the Nuremberg Trial.

The new amendments expand the list of organizations, whose symbols are banned in Russia, to include those that collaborated with fascist organizations and movements or are cooperating with the international or foreign organizations or their representatives, that deny the Judgment of the Nuremberg tribunal or other verdicts passed on during the World War II.

According to the document, those demonstrating the symbols of such organizations in public will face the fine of up to 50,000 rubles (about $1,200). The maximum penalty for the organizations, using such symbols to produce goods for sale of propaganda purposes will reach $2,400.

Deputy Speaker of Russian State Duma, and one of the bill's authors, Sergei Zheleznyak noted that next year the world will celebrate the 70th anniversary of the Nazi Germany's defeat, but nowadays one can see neo-Nazism becoming popular in Ukraine and several other countries. According to Zheleznyak, this is an attempt to glorify war criminals guilty of killing dozens of people and it is even becoming state ideology.

Zheleznyak stressed that Russia's aim is to lead the global anti-fascist movement. He added that the current events in Ukraine are unfolding with the connivance of some international organizations, including those referring to themselves as protectors of human rights , as well as with the connivance of the governments and people of many foreign countries.

Ukrainian Insurgent Army (UPA), formed in 1942, is among the most known organizations that corroborated with fascists. In 1943 UPA pledged to aid Third Reich in exchange for promises to allow the creation of an Independent Ukrainian state. During the WWII the Ukrainian nationalists killed 850,000 Jews, 220,000 Poles, over 400,000 Soviet prisoners of war and 500,000 Ukrainian civilians.