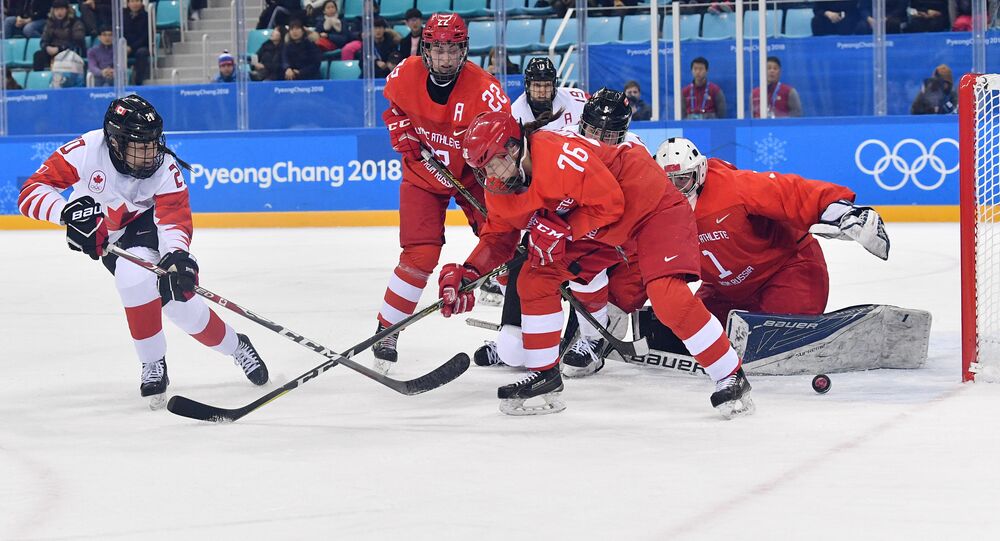 The game ended with the Olympic Athletes from Russia's 3-2 loss to Finland, with the teams of Canada and the United States set to compete in the tournament's final.

GANGNEUNG (Sputnik) — The Russian women's ice hockey team lost on Wednesday to the Finnish team 3-2 in the match for the bronze medal of the 2018 Winter Olympic Games in South Korea's Pyeongchang.

"Girls fought until the end, it was a real sport's struggle and in any case, they have already entered the history with the fourth place. This is the best result of our hockey players at the Olympic games. And I think that they drew a lot of attention to women's hockey," said Russian Minister of Sports Pavel Kolobkov.

© REUTERS / David W Cerny
Russian Women's Hockey Team Beats Switzerland, Advances to Olympics' Semifinal
In the group stage, Russian hockey players competed in Group A and lost all three matches to the national team of Canada (0-5), the United States (0-5) and Finland (1-5). Despite these three defeats, Russian athletes reached the quarterfinals of the tournament, taking fourth place in the group. According to the regulations, teams that took the first two places in Group A directly go to the semifinals.

In 1/4 finals Russian women's ice hockey team defeated Swiss team (6-2), in the semifinals, they lost to the national team of Canada (0-5).

Russian women's ice hockey team took part in the Olympic tournament for the fifth time. The best result of the team before that was the fifth place at the 2002 Games in Salt Lake City. At the 2014 Sochi Olympic games Russian hockey players took the sixth place.

Czech Hockey Team Beats US in Battle for Semi-Final