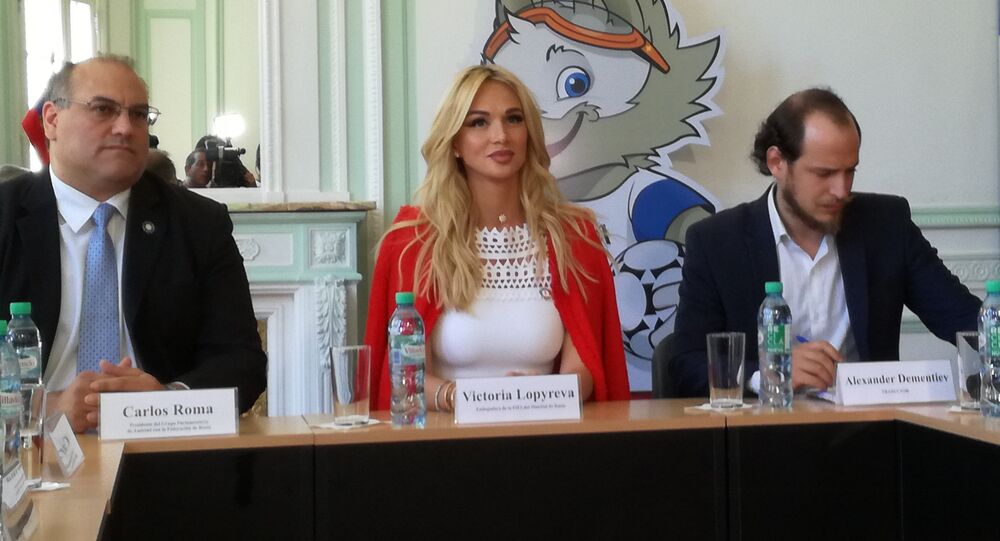 Model Victoria Lopyreva, a former Miss Russia, attended a number of events in Buenos Aires as part of the 2018 World Cup promotional tour ahead of her next stop in Brazil.

Lopyreva was awarded the title of Miss Russia back in 2003 and was appointed a World Cup ambassador in 2015. During her visit to Argentina, Lopyreva stressed her most important mission: "letting football fans around the world know what to expect in Russia."

"Our country has provided all the necessary conditions: security will be as tight as possible, all the infrastructure is prepared for the event, but the most important part is actually the people… We are all united by our love for the sport, regardless of ethnicity, sex or social status."

The model attended the contest between the local Boca Juniors and Temperley at La Bombonera stadium, where she sat next to Argentina's national football team head coach, Jorge Sampaoli and Boca Juniors President Daniel Angelici.

She also met with the president of the Argentinian Football Association, Claudio Tapia, and stopped by the Russian Scientific and Cultural Center, also known as The Russian House. "It was a business trip so I was busy all day long, but I'm already looking forward to my next visit because I just loved the atmosphere in this city."

The 34-year old is also keen to convey the notion of Russia being much more than just Moscow and St. Petersburg. Lopyreva herself was born in Rostov-on-Don, one of 11 cities hosting the tournament.

Can Brazil Win the World Cup and Will Spurs End Their Trophy Drought?