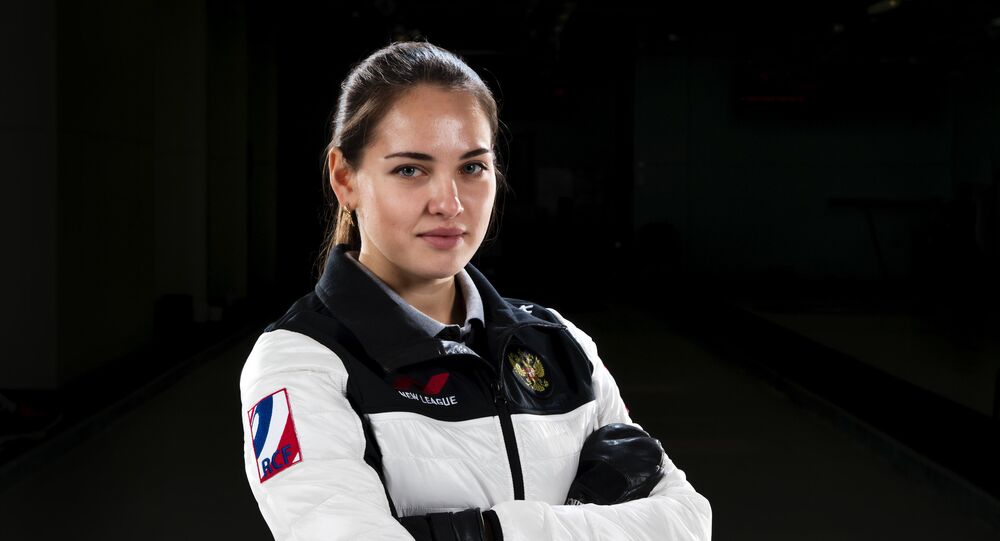 Russian Athletes to Watch at the Olympics (PHOTOS)

Even though the country isn't even on the search list on the official Olympic website (you have to look for "Olympic Athletes from Russia"), Russians still have plenty of heroes to cheer for at the games.

With the opening ceremony just hours away, the final roster of Russian athletes invited to compete under a neutral flag is set. And while multiple doping bans left the squad depleted and a high team finish is out of the question, fans can still expect a few podium finishes at the least.

Khoroshilov is Russia's most experienced and decorated downhill skier at the games. The 33-year-old became the first Russian to win a World Cup event, triumphing in Schladming, Austria in 2015.

Among the 10 bobsledders invited to Pyeongchang, Vasily Kondratenko is Russia's best bet for medals. The 28-year-old clearly just entered his prime, peaking with a first place finish at a 4-man event in Whistler last year.

The 21-year-old Bryansk native has five third-place finishes under his belt this season, and will look to spearhead the otherwise terribly shorthanded nordic skiing contingent in Korea.

Belorukova's season was highlighted by a second place finish in team sprint in Lahti, Finland, while the 23-year-old also added a bronze in a sprint classic event at Ruka, Finland.

Curling: Uliana Vasileva and Anastasia Bryzgalova (second from left, and second from right)

Russia's female curling team has traditionally been the one to watch for the men in the audience without a clue about the actual rules of the game. This year's rendition not only still looks good, but can count on a strong performance as well.

The pairing of Tarasova and Morosov has won two Grand Prix events last year, edging out competition in Grenoble and Moscow. The 23-year-old Tarasova was born in Kazan and started out as a single skater. Her 25-year-old partner was born in Postdam Germany, where his father served in the military. The duo has been performing together since 2012.

This duo is mostly interesting for their personal journeys rather than professional achievements. Zagorski, 23, was born in London, moved to train in France in 2007, and finally relocated to Moscow where she teamed up with Gurreiro, receiving Russian citizenship in 2014. Her 26-year-old partner was born and grew up in Australia before migrating to Moscow to pursue his skating ambitions. "Jonathan is a wonderful partner, I like skating with him very much. Our characters are very similar. We are both positive, so we found a common language at once," says Zagorski.

At 15 years of age, Alina is the youngest Russian athlete in Pyeongchang, but she already boasts a couple of Grand Prix wins at singles events at Grenoble and Beijing this season. Her father is an ice-hockey coach and she was named after the famed Russian rhythmic gymnast Alina Kabaeva.

The 19-year-old Ufa native's highlight this season was a second-place finish in the aerials at a World Cup event in Deer Valley, Utah. Spiridonova had to give up acrobatic gymnastics, but didn't want to leave sports completely, transitioning to aerial skiing. She is currently ranked third in the world in ladies' aerials.

At 19, Burov notched his first World Cup gold in the aerials at Deer Valley in January, capturing top spot in the World Cup rankings. He solidified his postion following up with another win at Lake Placid.

Kovalchuk really needs no introduction and is probably the biggest Russian name at the games. The 34-year-old forward made history by becoming the first Russian player to be selected first overall when Atlanta Thrashers picked him in front of everybody else at the 2001 NHL draft. He appeared in over 800 NHL games before returning home to play for SKA St. Petersburg.

Team captain Datsyuk is another huge name and at 39 years old, the oldest player on the roster. He's played in more than 950 NHL games before coming back to join forces with Kovalchuk at SKA. The four-time Olympic veteran's name is so prolific in the sport, that the term "Datsyukian" has become a part of the ice hockey lexicon used to describe particulary skillful offensive moves.

In 2015, The squad's undisputed leader Belyakova signed a contract with the New York Riveter, becoming the first Russian to compete in the National Women's Hockey League (NWHL). The 23-year-old notched 11 points in 17 games before returning to the Russian WHL the following season.

Coached by the legendary Albert Demchenko, both Repilov and Pavlichenko are gunning for the podium at the games. The 21-year-old Repilov is currently ranked third in the world in singles with two golds and six top-three finishes this season. Pavlichenko, 26 is right behind at the fourth spot in the rankings.

At 22 years of age, Tregubov is a four-time World Junior Championships winner, currently ranked fifth in the world. The Krasnoyarsk native has also already had a taste of the Olympics, having finished sixth in Sochi four years ago.

Avvakumova, ranked fifth in the world, was part of the first Russian women's ski jumping team (along with teammates Anastasiya Barannikova, Alexandra Kustova and Sofia Tikhonova) on a World Cup podium, when they finished second at the 2017 World Cup in Hinterzarten, Germany. It was the first time a women's team event was held at a World Cup. In 2014 the 26-year-old became the first ski jumper from the country to win a World Cup event when she was victorious in the normal hill in Chaikovsky.

Sobolev, 28, is currently ranked third in the world in parallel slalom, having already represented Russia at the Sochi Olympics. His younger sister, Natalia is also on the team.

Tudegesheva is a snowboarding heavyweight. The 30-year-old was the first Russian snowboarder to become a two-time world champion in the sport. The wins came in the parallel giant slalom in 2007, and in the parallel slalom in 2013. She's currently ranked second in the world in PS and hasn't missed the Olympics since Turin 2006.

READ MORE: Russians Tough Enough to Slide Down On Belly Instead of Snowboard

This international snowboarding couple took Sochi by storm in 2014. Vic became frustrated with the lack of resources for US downhill snowboarders, married Alena in 2011 and was granted Russian citizenship in 2012 while retaining his US passport. He claimed gold in the parallel giant slalom in Sochi, with his wife taking bronze in the women's event. It was only the second time a husband and wife had won medals in the same event at the Olympics.

The Moscow native has a couple of team golds and three top-three finishes in the 500m to her name this season. At 26, Golikova is a Sochi 2014 veteran and will be competing in the ladies' 500m and 1000m in Pyeongchang.