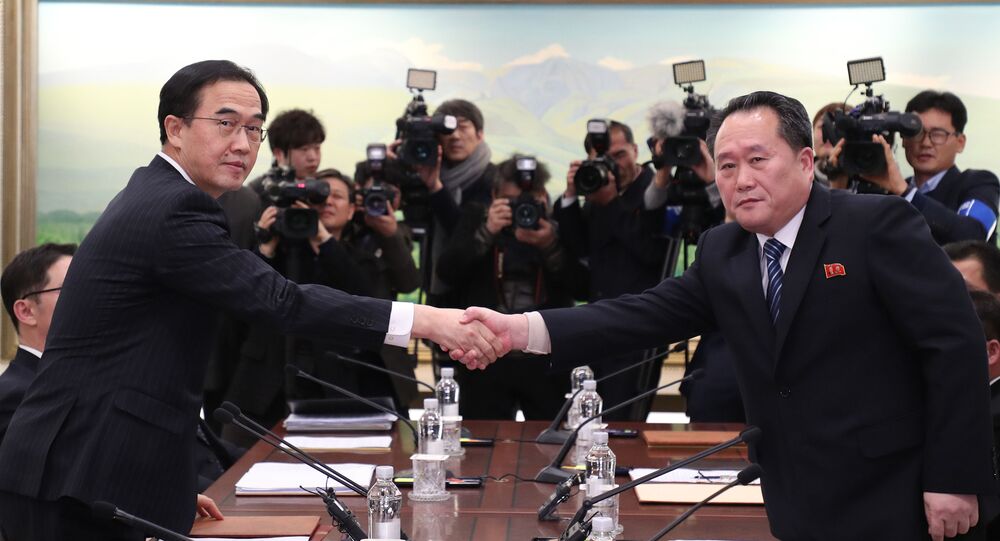 Earlier, it was reported that the representatives of the Koreas had met for the first time in two years in the demilitarized zone to talk about the steps that could be taken to soothe ever-growing tensions on the peninsula and North Korea's participation in the upcoming Olympic Games in Pyeongchang.

According to the joint statement that was issued following the talks, Seoul and Pyongyang have agreed to hold consultations to ease tensions on the border between the states.

The deal was reached during a meeting in the border village of Panmunjom.

The two states have also decided to renew high-level talks to enhance bilateral cooperation in various areas, which had been frozen due to the simmering conflict over the DPRK's nuclear program.

Moreover, according to the channel, South Korea and the DPRK have agreed to hold talks on issues related to the upcoming Olympic Games in Pyeongchang.

© Sputnik / Ramil Sitdikov
South Korea Will Reportedly Offer Visa Extensions to Winter Olympics Spectators
The development follows reports about the restoration of a military hotline between the Koreas. The North has reportedly agreed to restart the communication in order to prevent incidents in the Yellow Sea. The hotline, which was cut by Pyongyang in 2016, is expected to start working again on Wednesday.

Relations between the Koreas have deteriorated this year over Pyongyang's continuous nuclear tests. Russia and China have supported the "Double Freeze" solution that stipulated the halt of nuclear and missile tests by the DPRK in exchange for the suspension of US-South Korean military drills.