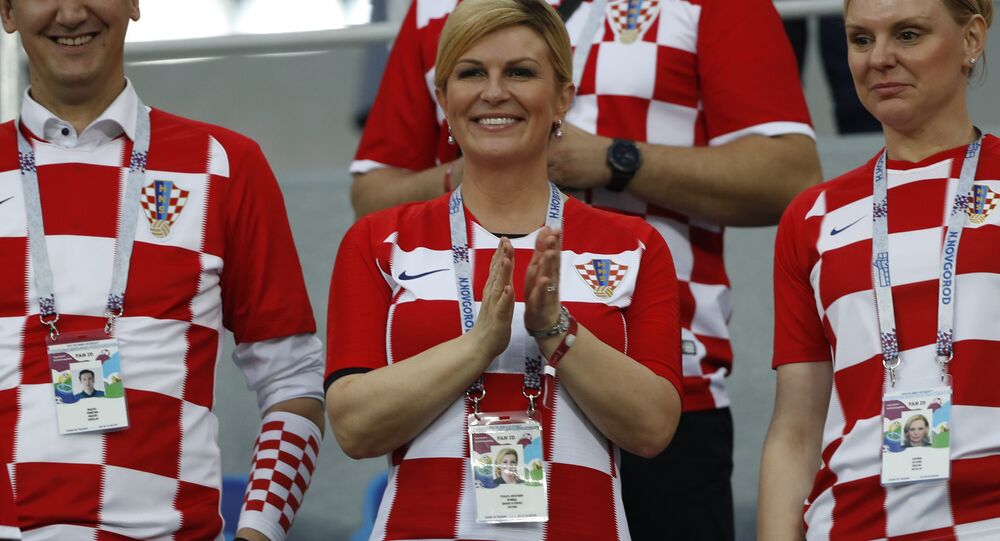 She stressed her desire to demonstrate that she is a football fan "like everyone else." Croatia's first female president, Kolinda Grabar-Kitarovic, came to Russia to cheer for her national football team at the FIFA World Cup. She eagerly shared her travel experience on social networks, becoming a real star in Russian media.

Grabar-Kitarovic flew economy class to Russia on July 1 and even featured in a joint picture with other passengers onboard the scheduled flight.

The Croatian president arrived just on time for her team’s clash against the Danes in Nizhny Novgorod. Grabar-Kitarovic had earlier received her fan ID for the World Cup 2018 and watched the game not from a luxury stadium suite, but from the stands together with other ordinary football enthusiasts.

"I wanted to showcase that I am a football fan, like everyone else; I wanted to support the team among other fans in the stands. I put on a shirt with national symbols, whereas the dress code in the VIP zone, which usually presupposes long gowns, wouldn’t have permitted such an outfit," the Russian website Sportbox quoted her as saying.

After the final whistle, which signaled Croatia’s win over Denmark, the former’s head of state entered the team’s changing room to give them a heartfelt hug. She congratulated the footballers and the lead coach on their triumph.

Kolinda Grabar-Kitarovic also took to Twitter to congratulate Russians on a "great play" in their bout against Spain and promised to come to Sochi on July 7, tagging Russian President Vladimir Putin’s English-language account. The Russian presidential press-service has stated that it is yet unclear if Putin will be attending the match.

Congratulations to #RUSSIA on a great play ⚽️! See you in #Sochi! @PutinRF_Eng

Croatia will play Russia in a quarter-final match in the Fisht Stadium in Sochi on July 7.