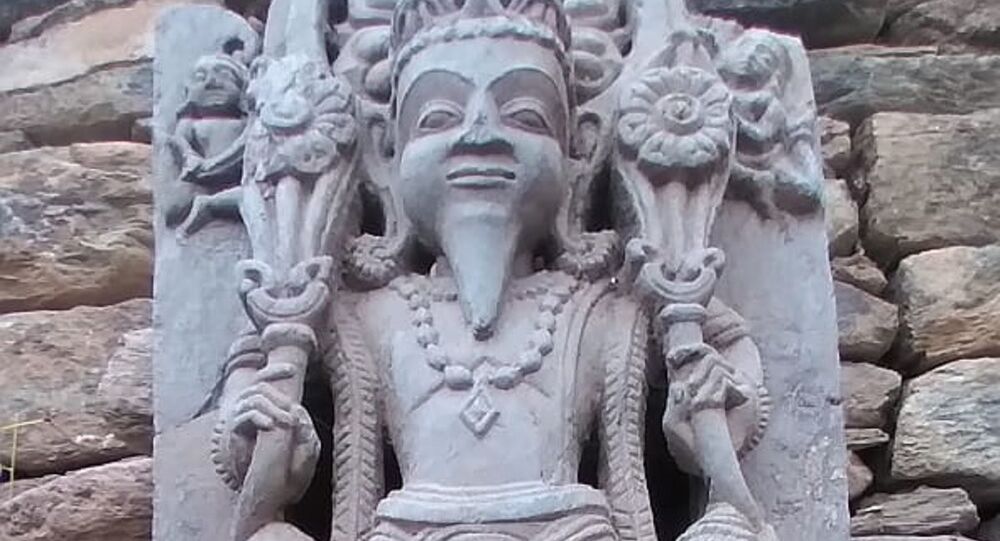 “The labourers just kept it aside considering it a broken idol. But in fact its discovery indicates that this place dates back long before 765 AD. It was discovered around the time of the festival Makar Sankranti when the Sun God is worshipped,” according to local social activist Jagdish Sharma.

The discovery of an ancient idol, believed to be that of the Hindu god of the Sun, in a remote village in the Indian state of Himachal Pradesh has triggered a wave of excitement among local people.

It was found in Pangana Village, situated in the Pir Panjal range of Himalayas.

Rugved Milind Thakur, the top administrator in the state's town Mandi, which is where Pangana is, told Sputnik: “The idol was found during digging work, adjacent to Dehri temple, for the purpose of building a residential complex. The digging has been stopped now”.

Local social activist Jagdish Sharma was first to identify the historical importance of the idol and ensured its safety.

Many residents of the area view the ancient idol’s discovery as a miracle.

Himender Bali Him, the president of Suket Culture, Literature and Jan Kalyan Manch (a local cultural organisation) told Sputnik that it is intriguing the Sun God depicted by the stone idol is wearing shoes which indicates to Persian (modern-day Iran) influence.

“This village is truly ancient, and references to it are found in the Mahabharata (eg, the mythical battle fought between Pandavas and Kauravas 5,000 years ago). It now seems that a flourishing civilisation existed here thousands of years ago,” he said.

Surender Thakur, sub-divisional magistrate of Karsog which is where Pangana Fort is, told Sputnik: “The find is important and an initial estimate by the Archaeological Survey of India is that the idol is more than a thousand years old.

“We are waiting for more input from ASI and further excavation in the area will, we hope, yield more evidence that an ancient civilisation thrived here,” the official added.

Pangana is known for its five-storeyed fort that dates back to 765AD and is famed for withstanding the worst earthquakes over the centuries without its structure being damaged.