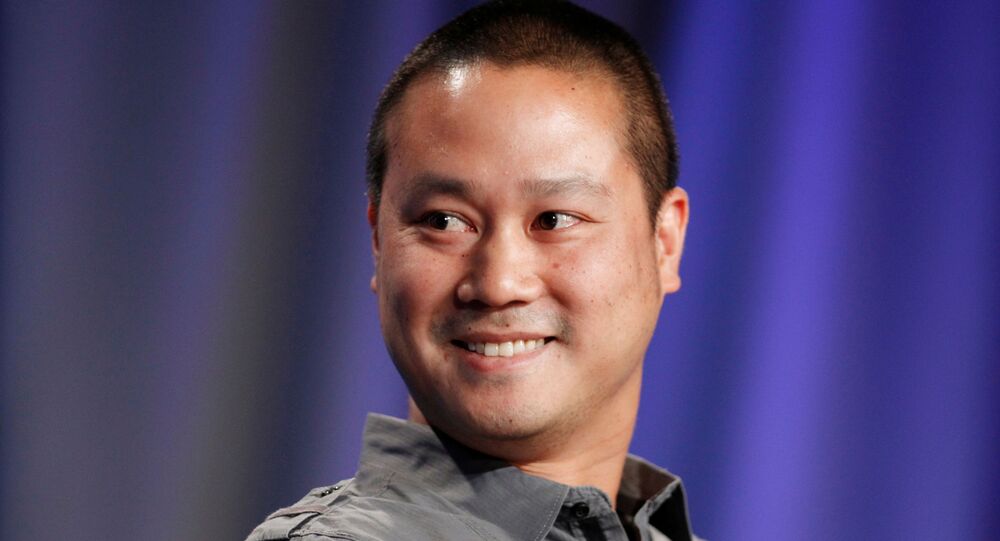 Tony Hsieh joined Zappos - then called ShoeSite.com - back in 1999, when it was a small online shoe store before transforming the company into an internet giant, which was sold to Amazon for $1.2 billion. Hsieh recently stepped down as CEO of Zappos earlier this year with an estimated $840 million fortune.

Tony Hsieh, the high-profile former CEO of online shoe retailer Zappos.com, has died at the age of 46, media reported, citing a statement from DTP Companies, an investment firm he founded.

The businessman - who amassed a fortune of $840 million - died following a house fire in Connecticut, where he was visiting friends.

The blaze broke out inside a waterfront mansion in the town of New London in the early hours of November 18, according to GeekWire.

Hsieh, who was born in Illinois and was the son of Taiwanese immigrants, studied at Harvard University before he joined online shoe and clothing retailer Zappos - then called ShoeSite.com - in 1999.

As CEO, he helped transform the fledgling internet start-up into a billion-dollar business. Zappos was sold to Amazon for $1.2 billion in 2009, but Hsieh remained with the company until his retirement earlier this year.

He went on to found DTP in 2012. The company has acquired 45 acres of real estate in Vegas and invested $350 million in everything from real estate developments and small businesses to startups and health care, according to its website.

“With a heavy and devastated heart, we regret to inform you that Tony Hsieh passed away peacefully on November 27, 2020 surrounded by his beloved family,” DTP spokeswoman Megan Fazio said in a statement, TechCrunch reported. “Tony’s kindness and generosity touched the lives of everyone around him, and forever brightened the world.”

Despite his millions, Hsieh lived in a humble Airstream trailer in downtown Las Vegas.

Back in 2014, he transformed a parking lot in the city into a 'micro-living oasis', made up of around 30 trailers.  As of 2020, he was still living in the tiny trailer.

A wave of other tributes to Hsieh poured out on social media.

Former presidential candidate Andrew Yang posted Saturday morning: 'I am stunned. Tony Hsieh touched so many lives and inspired so many entrepreneurs.

'His impact and legacy will go on and on. I met his family in Las Vegas - and am thinking of them today. RIP Tony. You will be missed.'

​Skateboarder and entrepreneur Tony Hawk added, “Tony Hsieh was a visionary. He was generous with his time and willing to share his invaluable expertise with anyone.”

​“A truly original thinker, a brilliant entrepreneur, and a kind-hearted and generous friend to so many,” tweeted entrepreneur Max Levchin.