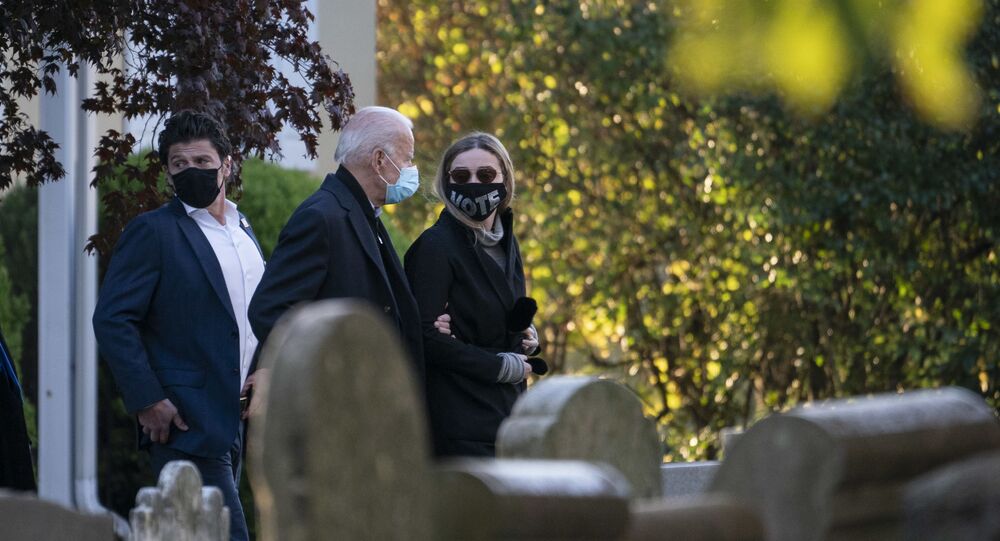 Born in Scranton in 1942, Biden has used his hometown as one of his closing campaign messages of “Scranton vs. Park Avenue” as he seeks to win back Rust Belt voters who left the Democratic Party and voted for Donald Trump in 2016.

Biden began the day attending church with his wife Jill Biden and two of their granddaughters Finnegan and Natalie at St. Joseph on the Brandywine in Greenville, Delaware. Biden also visited his son Beau's grave.

The Democratic hopeful then visited his childhood home in Scranton, Pennsylvania, where he scrawled the message 'from this house to the White House with the grace of God' alongside his signature and the date of the 59th US presidential election on the wall of the living room.

NEW: A picture from Scranton. Joe Biden just signed this on the living room wall in his childhood home here. For context, he did this in the bedroom during the 2008 race. @axios pic.twitter.com/R9sKjG6Ktv

​Democratic nominee Hillary Clinton narrowly lost Pennsylvania to President Donald Trump in 2016, and Biden has made many visits to the state in recent weeks and remains ahead of Trump in most polls.

Vice presidential nominee Kamala Harris is set to travel to Detroit in Michigan, in an attempt to rally voters in another state Democrats narrowly lost in 2016, but where Biden is also leading in the latest polls.

One day, our children and grandchildren are going to look us in the eye and ask what we did in this moment.

And I want to be able to say, we did everything we could to fight for our country and their future. Go vote.

Pennsylvania's 20 electoral votes and Michigan's 16 electoral votes could be crucial tipping points in the election as both Biden and Trump try to reach the 270 votes required for an Electoral College majority.