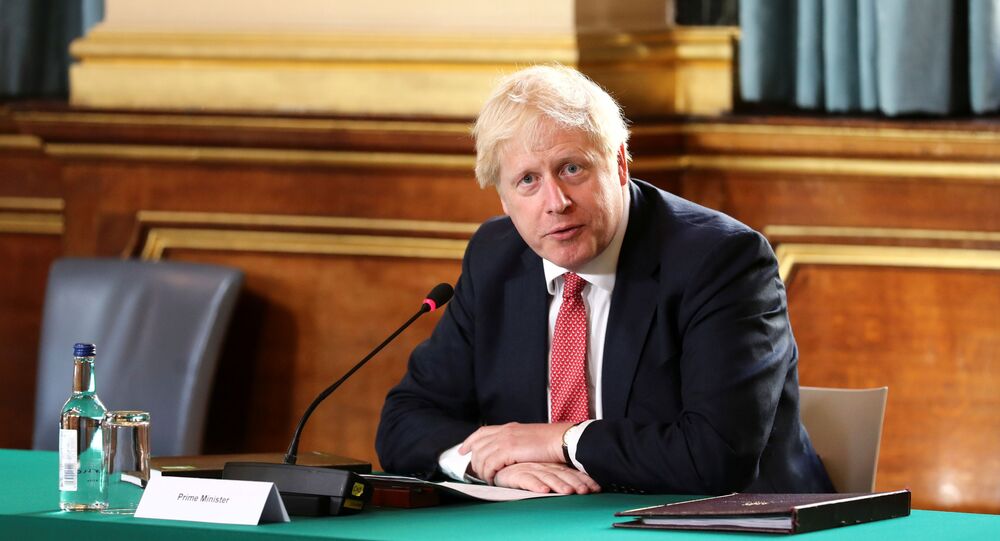 During the final Prime Minister’s Questions at the UK parliament before the summer recess, the UK PM rejected the suggestion that Russian interference had something to do with UK's vote on the membership of the European Union.

A question on the Russia report was posed by the Labour MP Ben Bradshaw, who suggested that Johnson has “knowingly and repeatedly put his own personal and party interests before the national security of our country” because the government blocked the publication of the report before the 2019 general election.

Johnson rejected that there was anything in the report that showed the Brexit referendum was undermined by Russia. He then called out “all those who want to remain in the EU” and said they “have no argument to stand on and should move on.”

“What you have here is the rage and fury of the Remainer elite finding that there is in fact nothing in this report and no smoking gun whatever after all the froth and fury,” Johnson said.

© AFP 2020 / JUSTIN TALLIS
A demonstrator holds a placard during a protest against the outcome of the UK's June 23 referendum on the European Union (EU), in central London on June 25, 2016.

In response to a similar line of questioning by the Labour leader, Johnson said that Keir Starmer, who was a Remainer, was simply “seizing” on the Russia report to try and give the impression that Russian interference was somehow responsible for Brexit.”

"The people of this country didn’t vote to leave the EU because of pressure from Russia or Russian interference. They voted to take back control…” Johnson said.

Starmer accused Boris Johnson, who received the report ten months ago, of doing nothing, while the threat to UK national security was “immediate and urgent”.

In return, the PM said that Starmer of “sitting on his hands and doing nothing” during the Salisbury inquiry.

“Labour Party parroted the line of the Kremlin, while the people of this country were poisoned at the orders of Vladimir Putin,” Johnson told the parliament.

The PM added that the UK was adding new legislation to protect UK’s “new critical infrastructure” and “intellectual property.” Starmer responded that Labour will support the new legislation.

British parliamentarians took to social media to comment on the spat between the party leaders.

Bringing Brexit into it smacks of desperation. The truth is he sat on his hands while Russia influence in the UK became *the new normal*, then sat on the report which revealed it#PMQs

"Mr Speaker, pre-prepared gags on flip flops. This is the former columnist who wrote two versions of every article he ever published!"

Johnson claimed @Keir_Starmer had not condemned Russia over the Salisbury attacks. Another brazen falsehood from this shameless charlatan of a Prime Minister #RussiaReport https://t.co/0UpcObU5Ii

Keir Starmer sat in Corbyn's shadow cabinet. He didn't speak out when Corbyn refused to condemn Russia for the Salisbury poisonings. Those are the facts. He could have acted. He could have spoken out. He chose not to.

Starmer also posed a question on the role of Russian media in how Brexit was covered in the news. He spoke of “serious distortions of the coverage provided by Russian state-owned international broadcasters, such as Russia Today.”

“It is time to look again at the licensing for Russia Today to operate in the UK,” Starmer said.

In response, Johnson reminded Starmer that his predecessor, Jeremy Corbyn “took money for appearing on Russia Today.” Starmer fought back, saying that the Labour party is "under new management" in case Johnson's "hasn't noticed."

The Intelligence and Security Committee of Parliament (ISC) published its report on 21 July, arguing that “Russia represents a serious threat to the United Kingdom.”

The UK government is currently in the process of publishing its response.

Kremlin spokesman Dmitry Peskov commented on the report and said it contained "groundless accusations" that could not be "substantiated." He added that Russia has never interfered in foreign elections and that the Russian government was focused on its own development, which is “the most important thing for us."