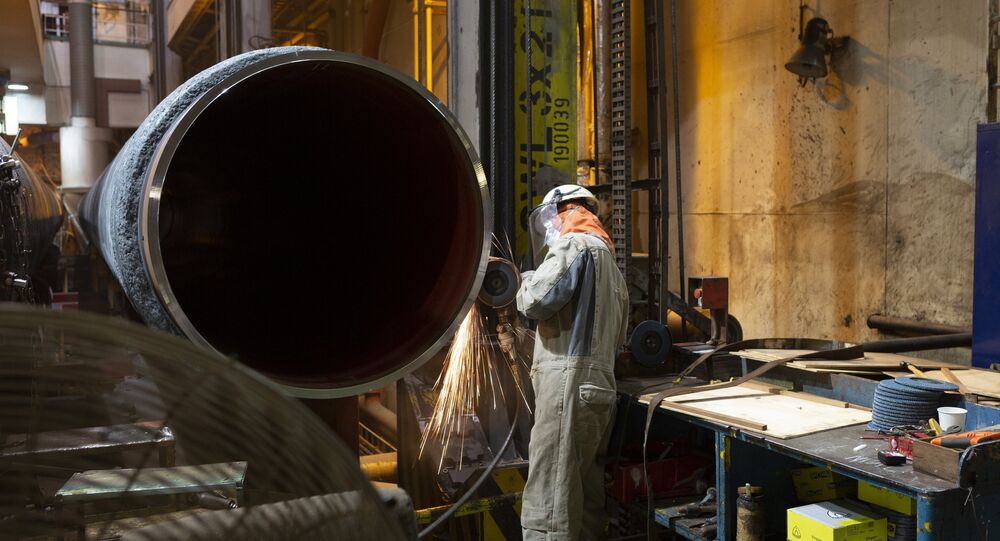 Russian Foreign Minister Sergei Lavrov and his Danish counterpart, Jeppe Kofod, discussed the situation around Denmark's permit for the Nord Stream 2 gas pipeline’s construction in the country's territorial waters when they met in New York in September.

"The Danish Energy Agency has granted a permit to Nord Stream 2 AG to construct a section of the Nord Stream 2 natural gas pipelines on the Danish continental shelf southeast of Bornholm in the Baltic Sea", the agency said in a statement.

Denmark is now obligated to "allow the construction of transit pipelines with respect to resources and the environment and if necessary to assign the route where such pipelines should be laid”, according to the agency.

Nord Stream 2 AG, the operator of the Nord Stream 2 project, has laid more than 2,100 kilometres (1,300 miles) of the gas pipeline to date and will begin preparatory work and pipe laying near Denmark in the coming weeks, the company said in a statement.

“Preparatory work... as well as pipe laying will begin in the coming weeks... To date, more than 2,100 kilometres of two pipeline legs have already been laid. Pipe laying has been completed in the waters of Russia, Finland, and Sweden as well as being nearly complete in the waters of Germany. Work on both onshore sections is nearing completion", Nord Stream 2 AG said.

Denmark’s decision on Nord Stream 2 is good news for European consumers as it ensures the competitiveness of the European economy, the German Committee on Eastern European Economic Relations said.

"Additional gas supplies help us maintain stable energy prices during periods of declining domestic production in the EU and growing demand", the committee said in a statement.

"Nord Stream 2 will provide much-needed additional capacity to supply Europe with natural gas without making other routes redundant. Each additional import option increases competition on the European gas market and, therefore, benefits all EU countries as well as neighbouring states", the statement said.

Earlier in October, Gazprom announced that 83 percent of the Nord Stream 2 pipeline — a 1,269-mile stretch in the Baltic Sea — had been completed, adding that the pipeline is expected to be completed by the end of this year.

"We were expecting this decision during the fall. Denmark’s principled position delayed the project for some time, but geopolitical weapons cannot be stopped with instruments that regulate exclusively trade relations", Andriy Kobolyev, CEO of Ukrainian state energy company Naftogaz wrote in his Facebook blog.

"The completion of gas market reforms and the full implementation of European energy legislation in Ukraine becomes even more important. This legislation will protect us in the same way as it protects EU consumers", Kobolyev stressed.

The Nord Stream 2 project envisages the building of a twin pipeline that will deliver around 55 billion cubic metres (almost 2 trillion cubic feet) of gas directly to Germany and other European countries. The pipeline for carrying Russian natural gas to Europe is set to pass through the territories of Denmark, Finland, Germany, Russia, and Sweden.

For months, the project has drawn opposition from a number of countries, especially Ukraine, which claims that Moscow plans to deprive Kiev of its gas transit revenues. The United States, which is trying to sell more of its own liquefied natural gas to its overseas allies, insists that the project will make Europe dependent on Moscow. Russia has repeatedly rebuffed the claims.