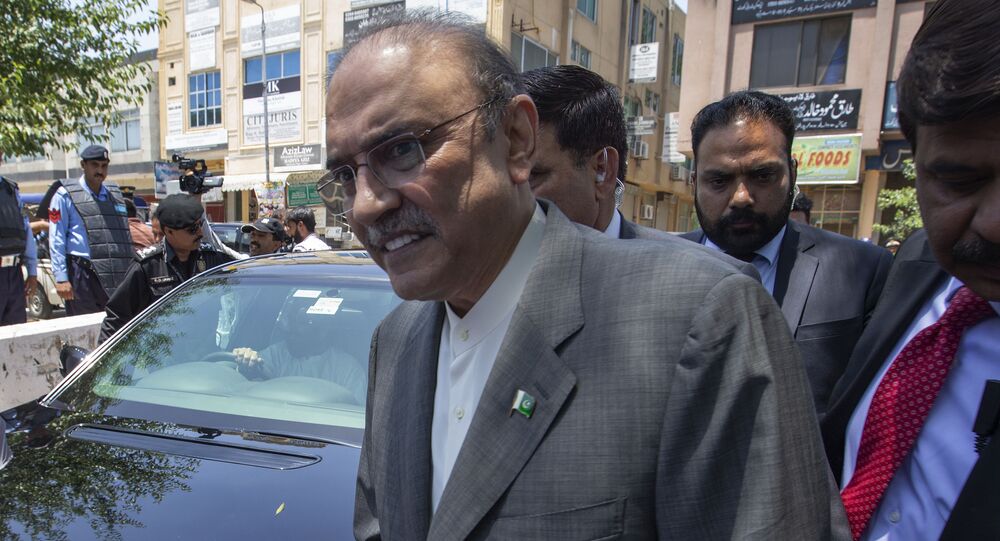 New Delhi (Sputnik): Zardari was arrested by Pakistan’s anti-corruption body while in his home in Islamabad after a court rejected his and his sister's bail plea. However, his sister has not been arrested.

As former Pakistan president Asif Ali Zardari was arrested on corruption charges on Monday, it left a lot of people on social media quite amused. However, there were others who were annoyed by Prime Minister Imran Khan's move against their beloved former leader.

Zardari was earlier jailed during the 1990s and early 2000s on various corruption charges.

Many netizens posted hilarious memes and messages in reaction to his arrest. A user drew parallels between 1992 and 2019 and suggested with Zardari's arrest, Pakistan would now be able to win the Cricket World Cup as it did in 1992.

Some incidents happen in 1992 as same as to 2019:
— Nawaz Sharif was in Jail.
— Zardari was in Jail.
— Eid-ul-fitr came after Ramzan.
— Eid-ul-Adha came after Eid-ul-Fitr.
— Pak losed their 1st match against WI.
— Pak won 2nd match.
— 3rd match was drawn.#CWC19#WeHaveWeWill pic.twitter.com/n3gWDWl2iW

Others posted memes joking about how Zardari would be "joining his political rival" Sharif in jail.

So former president of Pakistan Asif Ali Zardari has been arrested earlier today and here's what he has to say to his old friend former PM Nawaz Sharif in their meeting today. Such a cute love story. #AsifZardari #Zardari #IHC #NAB pic.twitter.com/eH7yp5C91V

Some applauded Prime Minister Imran Khan for keeping his poll-promise to arrest both Zardari and ex-Pakistani PM Nawaz Sharif for their alleged corruption.

There is NOTHING new about Imran Khan's stance regarding corruption and his fight against the (alleged) corruption of Nawaz Sharif and Asif Zardari. Khan said it out loud as a political nobody in 1996, and four governments later, he reiterates it as the prime minister of Pakistan

Be it the 1992 World Cup, Shaukat Khanum Hospital or putting Nawaz Sharif and Asif Zardari behind the bars, Imran Khan has fulfilled all his promises. And now when PM says he will get us out of the current economic crisis, I believe he will IA! #ZardariArrested

However, some supporters of the PPP expressed solidarity with the former president.

Bravery of #AsifAliZardari labled him #NelsonMandela of #Pakistan by Shaheed Rani,without conviction he spend 11 years in jail with worst torture.With all tht he gave us 18th amendments, He empowers the parliament and raised the slogan #PakistanKhappay #WeStandWithAsifAliZardari pic.twitter.com/Ho6f4t8MEY

According to reports, Zardari's legal counsel are set to appeal against the arrest in the Supreme Court of Pakistan.