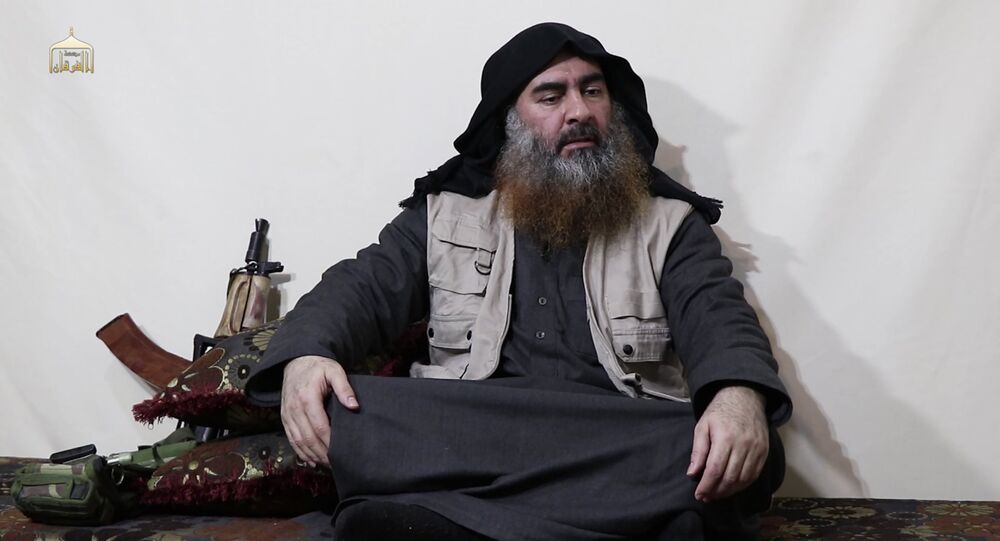 After months of speculation as to whether he was alive or dead, at the end of April a video was released in which Daesh leader Abu Bakr al-Baghdadi made his first appearance in five years. Now, new information about the hunt for his location has been made public.

The most senior female Daesh prisoner has played a significant role in the CIA's manhunt for Abu Bakr al-Baghdadi, it has been revealed by the Guardian.

The Daesh woman, Nisrine Assad Ibrahim, better known by her doom-inducing nom de guerre, Umm Sayyaf, has reportedly helped in joint CIA-Kurdish efforts to track down Mr Baghdadi by providing detailed accounts of his movements over the years, including the locations of safe houses as well as the obscure traveling routes that he takes.

Miss Sayyaf, 29-years-old, and believed to be Iraqi, was captured in a 2015 US Delta Force raid in Syria, in which her husband, Daesh's then-second in command and the group's so-called oil minister, Abu Sayyaf, was killed.

Since being detained, Miss Sayyaf has reportedly spent many hours helping American investigators use maps to determine where Baghdadi may be bogged down.

"They were very polite [the American investigators] and wore civilian clothes," she told the Guardian, "I showed them everything I knew."

In February 2016, Miss Sayyaf is said to have provided the location of a house in the northern Iraqi city of Mosul where she believed Baghdadi was hiding out. Yet, despite being so close to bagging the world's most wanted man, Kurdish officials told the Guardian that the US did not want to carry out an airstrike on the home for fear of killing civilians in the tightly packed neighbourhood.

"I told them where the house was," Umm Sayyaf is reported as having said.

"I knew he'd been there because it was one of the houses that was provided for him, and one of the places he liked the most," she told the Guardian.

Kurdish officials also corroborated the Mosul story, reportedly saying that: "We told the Americans and asked them to act, and they said they had other things on. Baghdadi moved houses quite quickly and we missed him. Later, the Americans came back and said we were right."

The newspaper's revelation — which has allegedly been confirmed by American investigators involved in the operation — marks a significant moment in the ongoing hunt for Mr Baghdadi, who has managed to evade capture since he proclaimed the establishment of the caliphate in June 2014 from the pulpit of the al-Nouri mosque in Mosul.

Miss Sayyaf — who is now on death row in Iraq — is a magnet of controversy who is accused of presiding over some of Daesh's most hideous crimes, including the capturing and subsequent enslavement of American aid worker, Kayla Mueller along with several Yazidi woman and girls, many of whom are said to have been raped and killed.

The fact that Miss Sayyaf's family occupied leadership positions in Daesh, coupled with her marriage to a Baghdadi confidant, meant that she had rare access to the Daesh leader, she told the Guardian, and even claimed to have observed him recording propaganda messages in her home.

READ MORE: Daesh Reportedly Claims it Has Established a "Province" in India

"He used to do that in our sitting room in Taji [a town in central Iraq]. My husband was the [Daesh] media chief then, and Baghdadi would visit often," she reportedly said.

"He visited us often in Syria. Sometimes he would come for a few hours. Sometimes he would stay longer. It was just a normal house, and I provided him and my husband tea. We would also go to Raqqa with him, I remember going twice. I told the Americans where the house was. They blindfolded us every time we entered the street, but I had been there before, and I knew what it looked like," Umm Sayyaf is quoted as saying.

A senior Kurdish intelligence official said of Umm Sayyaf's help: "she gave us a really clear picture of Abu Bakr al-Baghdadi's family structure and the people who mattered most to him. We learned about the wives of the people around him in particular, and that has been very useful for us. She identified lots of people and their responsibilities. And she gave us a sense of the real feelings of the leadership wives."