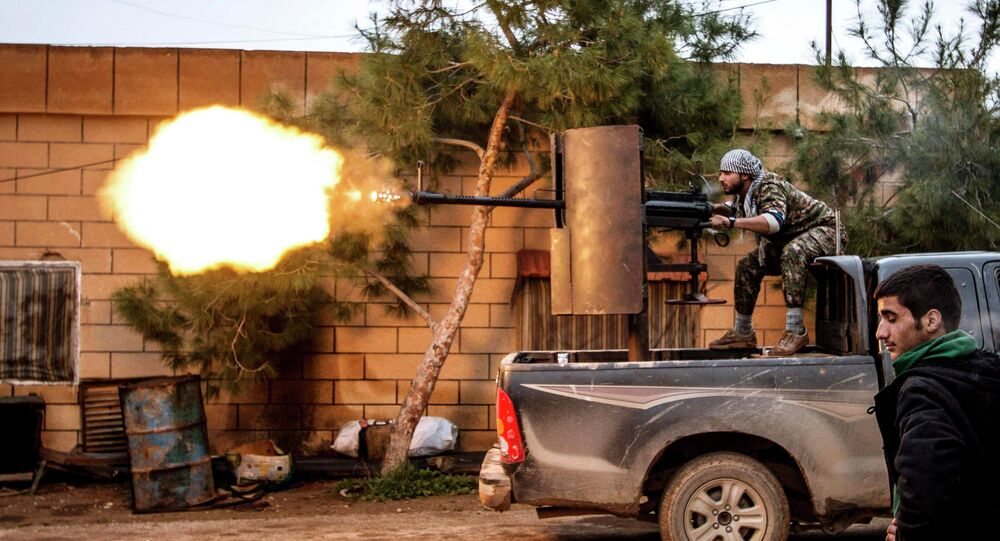 At least eight British citizens, including a 26-year-old woman, were killed in Syria over the past few years fighting side to side with the Kurdish People’s Protection Units (YPG). Some of those who managed to return home were arrested and accused of terrorism, despite being in Syria to fight the Daesh* terrorist group.

A former British soldier who was charged with terrorism offences for fighting against Daesh in Syria has slammed UK authorities for their "incoherent" approach toward volunteer fighters who risked their lives to expel the terrorist group from territory it once controlled.

In an interview with the Independent, James Matthews, a 44-year-old who left the British Army in 1999, said that, "We [British volunteer fighters] went out there because our government was not doing enough."

"It was a job that needed doing, we had to get Isis out of that territory. I would have been unlikely to go out if the British Army was also there fighting," he added.

Mr. Matthews was the first person in the UK to be dragged to the courts for fighting with the Kurdish People's Protection Units (YPG) in Syria after tens of other Brits headed to the war-torn country in support of extirpating Daesh from its northeastern stronghold.

Yet, upon returning from the battlefield to the UK, Matthews was arrested in the city of Portsmouth, subsequently strip-searched, had his belongings seized and endured months of what he describes as being "interrogated strenuously." Outrage then erupted across social media last February when he was slapped with terror offence charges, because, according to Westminster Magistrates' Court, he had attended a "place used for terrorist training." Similar charges were levelled by British authorities against others who had fought with the YPG against Daesh.

Yet, the YPG is not a proscribed terrorist group in the UK and the British government along with its allies has been engaged in arming and backing the Kurds in their effort to expel Daesh from Syrian territories. Shining a light on the apparent contradiction, Mr Matthews told the Independent that, "There is no coherent approach… I was considered a terrorist whereas the YPG aren't."

While being questioned by the police about his role in Syria, Mr Matthews recalls a policeman saying that, "Well, the YPG aren't on the proscribed list, but Turkey, which is a Nato ally, says they're terrorists, so…"

Although the charges against Mr Matthews were eventually dropped, in the process he lost his job as a teacher and, according to the Independent, suspects that he is still being closely watched by the eye of the British state.

Alastair Lyon, the solicitor who represented Mr Matthews, is quoted as telling the Independent that the case against his client was "bonkers."

"There remains no answer from the authorities as to why this case was brought or why it was dropped," he reportedly said.

It is still the official policy of the Metropolitan Police to pursue and indict anyone who returns from the conflicts in Syria or Iraq, including those who fight against Daesh with the YPG.