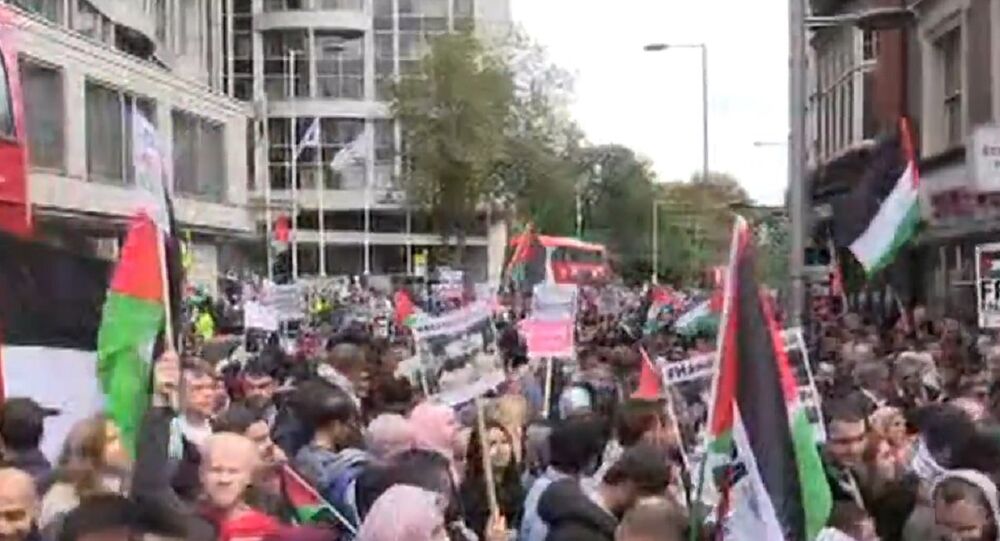 The Undercover Policing Inquiry, established 2015 by then-Home Secretary Theresa May after a series of revelations about abuses by undercover state spies, has now revealed the International Solidarity Movement was one of the groups in operatives' crosshairs.

The Inquiry exposed the individual in question to be ‘Rob Harrison' (a pseudonym), and reports from his contemporaries suggest a rather colorful and deeply-involved period of deployment, lasting 2004 — 2007.

ISM activists come from the world over — but are largely centered in Europe and North America — an engage in non-violent solidarity activities in Palestine, such as protests, chaperoning and olive-picking.Two members of the group — Rachel Corrie and Tom Hurndall — both died after coming into contact with occupation forces in 2003, with Corrie being crushed by a bulldozer, while Hurndall was shot in the head by an Israeli Defense Force sniper.

I knew Rob and had thought he was a friend. I believed and trusted him. Yet he was secretly reporting on me and my comrades to police the whole time. Why? And was that "intel" being passed on to Israel?

​Harrison never visited Palestine, but was a prominent volunteer with ISM London for some time, helping run sessions in which UK volunteers were trained on what to expect in Palestine, and leading fundraising activities. He also DJ'ed under the name ‘Boogie Knight', playing a set at ISM London's September 2005 fundraiser event ‘Dance for Peace' in East London.

Kieron Gill, now a local Labour councillor in London, remembered ‘Harrison' as a "nervous loser" who claimed not to to be educated enough to speak out on Palestine.

My main memory of Rob is as a helpful, friendly guy, who was a DJ with a car. He ran fundraiser parties to help pay for ISM trainings to send volunteers to Palestine.

I literally danced to his tune at some of these parties!

He seemed to disappear one day. Now we know why

​Another ISM London activist, who asked not to be named, said he didn't think the group would be targeted by police in the first place, as it would've been "a waste of time" — "we weren't a threat to anyone in my opinion."

Another activist, who wished to remain anonymous, suggested information "Harrison" collected may have been passed onto Israeli authorities, and could account for why so many activists got refused entry to the country — she recalled a journey to Palestine in 2005 she took part in with three other ISM volunteers.

She was let in, but the others weren't — and Israeli lawyer Gaby Lasky told her the Israeli authorities had "international security" records on at least one member of the embargoed trio.

At the time, she mistook this as a reference to the activist anti-apartheid campaigning in South Africa many years prior.

The activist in question said he's convinced information ‘Harrison' gathered did play played a part in his denial of entry — as although ISM was not officially a banned group, its activists were often refused entry to or deported from Palestine by Israeli authorities.

© Sputnik / Kit Klarenberg
EXCLUSIVE: Victim of Disgraced Undercover Police Sex Pest Talks to Sputnik
Nonetheless, at least one activist — "Kerry" — claims to have held suspicions about "Harrison" all along, as during her time in ISM London, he'd frequently visit her housing co-op, but never reciprocated.

"I knew it! It's pathetic, spying on a bunch of peace activists," she said.

To date, it has been revealed almost 200 British undercover police spied on over 1,000 political groups 1968 — 2011, and ISM London wasn't the only campaign infiltrated by ‘Harrison' — he also penetrated State of Emergency,  No Borders and Globalize Resistance.

Admission from the Undercover Policing Inquiry that yet another #spycop (N18) was arrested and therefore involved in spying on anti-arms trade campaigners at the DSEi arms fair (p14). From the document, it looks like it was DSEi 2007. https://t.co/ypFeYsegU5

​He may have been one of a group of 15 activists arrested for aggravated trespass at a protest during the Defense Security Equipment International (DSEi) arms fair in East London in 2007.

When the charges reached court, the Crown Prosecution Service asked for two weeks to review the evidence against arrestees — but the charges were quietly dropped before the defendants received any disclosure, perhaps because such disclosure would've exposed Harrison's undercover status.

'Messing With the Wrong People': Why Victims of UK 'Spycops' Keep On Fighting