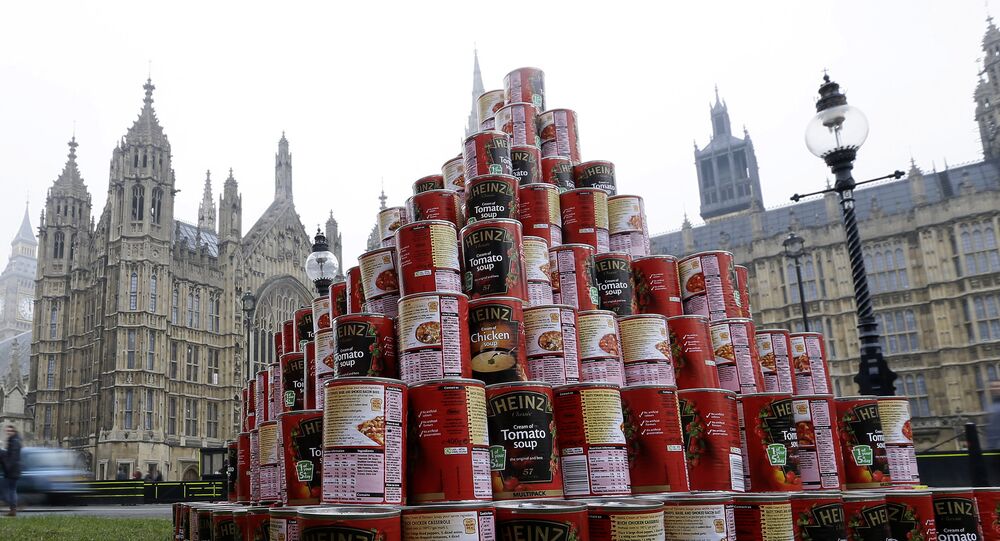 Millions of British citizens on benefits and tax credits will migrate to Universal Credit in April, generating a spike in food bank usage, a UK charity warned on Friday.

The Trussell Trust, which operates 420 food banks across 1,200 locations throughout the UK, said in a policy briefing that the UK government must protect roughly 3 million vulnerable benefits claimants from losing vital support during a ‘managed migration' period to the universal credit system.

"We're really worried that our network of food banks could see a big increase in people needing help," Trussell Trust CEO Emma Revie said in a press statement. "Leaving 3 million people to wait at least five weeks for a first payment — especially when we have already decided they need support through our old benefits or tax credits system — is just not good enough."

She also noted that the UK government should take greater responsibility for moving benefits claimants to the new system while avoiding payment gaps.

This govt is rolling out UC to 1.7m people next April without changing a single thing. When the Trussell Trust, the magnificent charity at the sharpest end of austerity rings a warning bell then we all need to sit up and listen, not least this government.https://t.co/XeMEPOP76u

The briefing also urged Brits to write to Esther McVey, UK secretary of state for work and pensions, to take responsibility for moving claimants over to Universal Credit to minimise income breaks.

It also urged authorities to expand and strengthen the new system to ensure its availability and prepared for managed migration, in addition to publishing a schedule for the next stages of Universal Credit where citizens can review the process and make changes.

What is Universal Credit?

According to Gov.uk, Universal Credit is a payment system for low-income or out of work citizens, and eligibility requirements for receiving it depend on where residents live and their circumstances.

Citizens Advice helps applicants determine their eligibility for Universal Credit and ineligible applicants can still apply for other benefits.

Applicants agree to a ‘Claimant Commitment' with a work coach, and must apply for jobs, training courses, pay housing costs and report changes in their circumstances to meet responsibilities.

The government cautions that it could stop or reduce payments to claimants via ‘sanctions' failing to meet responsibilities set in their Claimant Commitment, with several sanction levels defined by the claimant's actions, but claimants can appeal sanctions if they disagree with them.

Parliament approved new regulations in accordance with the Welfare Reform Act of 2012 in June, with the Social Security Advisory Committee (SSAC) consulting on proposals to final regulations set for October.

Other Problems with the Universal Credit System

During the ‘managed migration' period, the government will inform around 1 million working families on tax credits and 750,000 disabled citizens on employment and support allowance (ESA) to apply for universal credit a month ahead or face losing access to their benefits.

Many claimants applying for universal credit have to wait at least 35 days without income before receiving benefits, causing significant problems such as stress, rent notices and evictions, and reliance on food banks, the London Guardian stated.

Can’t believe the Citizens Advice Bureau has sold out to the DWP for £51 million after 79 years of independence. It is near impossible to bite the hand that feeds — as we have seen with so many charities — so a clever way to mute criticism of #UniversalCredit.

Trussell Trust also stated that claimants struggling with the complicated online application system will not receive universal credit in time, and even if successful, must wait five or more weeks to receive a first payment.

The National Audit Office stated that the Universal Credit program was "driven by an ambitious timescale" and suffered from problems of "weak management, ineffective control and poor governance", the BBC reported last year.