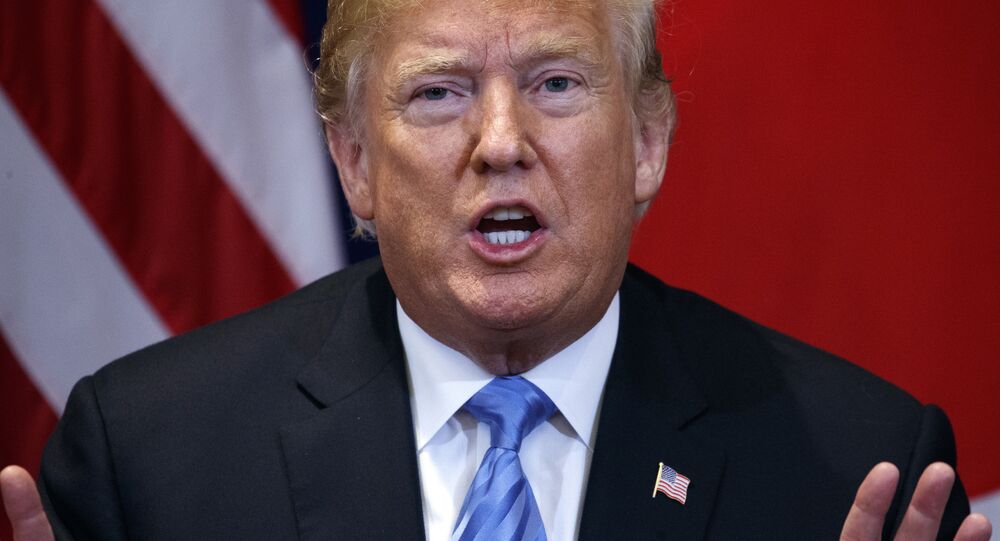 US President Donald Trump debriefed reporters after chairing the United Nations Security Council meeting Wednesday. As usual, there were plenty of fireworks.

Regarding his Wednesday statement at the United Nations that Beijing is attempting to interfere in the upcoming US election, Trump said that when he called out the Chinese delegation straight to their faces, "China has never been challenged like this before."

Trump also said about Wednesday's interest rate hike at the Federal Reserve: "I'm not happy about that."

​Allegations of sexual assault levied against Brett Kavanaugh, who Trump nominated to the US Supreme Court, are a "big, fat con job," the president said. "What is going on? Why did they wait?" Trump said of Democrats, who he says waited to bring up the news at the last minute to delay voting on the nominee.

"The people are going to have to make a decision," Trump said about the upcoming Senate vote. He also predicted some Democrats would vote for Kavanaugh.

Acosta then asked why Trump "always sides with the accused" when allegations of sexual misconduct arise in the political arena. Trump noted that he would watch Thursday's Senate hearing with Kavanaugh and his accuser about the accusations, and that if it seems Kavanaugh is guilty he might  withdraw the nomination. Referring to what he calls Democrats' obstruction tactics, Trump lamented "If we brought George Washington here… the Democrats would vote against him. And he may have had a bad past, who knows." (George Washington owned slaves.)

Trump then discussed his own past. He claimed that "many false charges" of sexual misconduct or assault had been leveled against him and amplified without question by US mainstream media, taking the chance to call most of the reporters in the room "fake news," except "20 percent."

"I was accused by, I believe it was four women… who got paid a lot of money to make up stories about it," he said, claiming that one was offered $750,000 to say she was assaulted by Trump.

Regarding increasing trade and other tensions with Beijing, the president reiterated that "We have evidence" of Chinese meddling in US elections. "It'll come out," Trump said. In response to another question later in the press briefing, Trump said he and Chinese President Xi Jinping "might not be friends" like they used to be as ties between the countries deteriorate. However, he noted, "China is very special. They're incredible people; it's an incredible country."

On the domestic front, Trump said he would meet with embattled US Deputy Attorney General Rod Rosenstein, but that their talk could be postponed because of the Kavanaugh hearing. "I would prefer not" to fire Rosenstein, Trump noted, adding that Rosenstein is still a member of the Trump administration. "I would much prefer keeping Rod Rosenstein" to finish up the Russia investigation "witch hunt" Trump said.

Axios reported Monday a bombshell "exclusive" that Rosenstein was resigning in the expectation he would be fired, before later correcting the story to say Rosenstein "offered" his resignation. Rosenstein is still on the Trump administration staff, however.  Rosenstein came under fire after a disputed report in the New York Times claimed he wanted to secretly wear a wire while meeting with Trump.

Trump also criticized the Russia probe as a "con job" that has turned up no evidence of collusion despite extensive, well-resourced investigations.

​Trump commended the sacrifices made by the Kurds in fighting Daesh, and took a question from a second Kurdish reporter, who he referred to as "Mr. Kurd."

The president claimed credit for averting a planned Iran-Syria-Russia offensive on Idlib, Syria, which US officials have said is an al-Qaeda "safe haven," but is also where many civilians still live. "Today, I gave great credit to Iran, to Russia, to Syria for not doing it…I hope it's going to be surgical."

Trump said "I think the [New York] Times is going to endorse me," joking that they wouldn't sell any newspapers if they weren't reporting on Trump. He also repeated his favorite descriptor of the paper, "the failing New York Times."