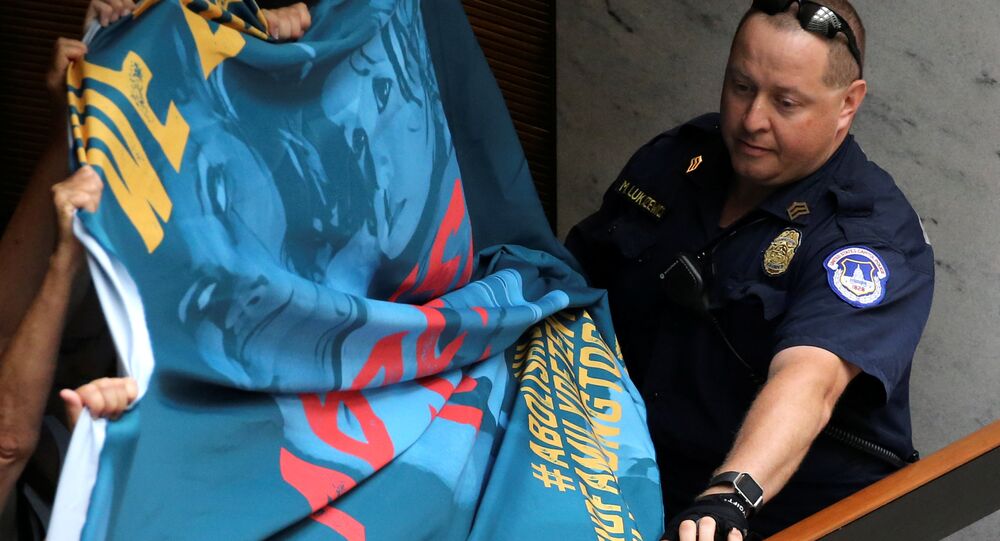 Capitol Hill police detained hundreds of people in Washington, DC on Thursday while they voiced their displeasure with policies enforced by the federal government. Notably, the demonstrators directed their attention toward US immigration policies.

The gorgeous voices of women of conscience resound throughout the Senate building as this ENORMOUS group prepares to take arrest for standing up to Trump’s mass deportation agenda w/ @womensmarch @popdemoc #WomenDisobey #AbolishICE pic.twitter.com/s2gDl1NNAd

​Among those detained was Rep. Pramila Jayapal (D-WA). "I just got arrested," she said Thursday afternoon, with at least 500 women "who took over the Hart Senate Building, protesting the inhumane, cruel 'zero-tolerance' policy of Donald Trump and this administration."

Some Twitter users reacted in disbelief that it was even possible for Capitol Hill police to detain so many people at once.

575 people? Is that even logistically possible? https://t.co/ZzTsNNvxoe

​While Democrats have blasted Trump on immigration, few if any lawmakers from either side of the aisle protested former President Barack Obama for his own deportation policies. As of December 2017, Republican President Trump was "deporting fewer people than Barack Obama did," the Economist reported.

"We care!" the demonstrators chanted. Some believe the chant was a direct refutation of the jacket worn by First Lady Melania Trump when visiting the US-Mexico border. Her green jacket read "I REALLY DON'T CARE DO U?" and prompted outrage about the fashion statement's perceived insensitivity.

​Coinciding with the demonstrations is the #AbolishICE hashtag campaign. Immigration and Customs Enforcement (ICE) was created in 2003, one of the many changes made by the federal government in the wake of the 9/11 terror attacks.

"It's time to abolish ICE," Sean McElwee wrote in The Nation last month, describing the agency as "a mass-deportation strike force" that is "incompatible" with the values the US says it cares about, including democracy and human rights.

"ICE was a direct product of the post–September 11 panic culture, and was created in the legislation Congress passed in the wake of the attacks. From the start, the agency was paired with the brand-new Department of Homeland Security’s increased surveillance of communities of color and immigrant communities. By putting ICE under the scope of DHS, the government framed immigration as a national security issue rather than an issue of community development, diversity or human rights," the analyst wrote.

The Senate named its third office building in August 1976 for Senator Philip Hart, a Michigan Democrat with a reputation for political bravery and integrity.

Antarctica Loses Trillions of Tons of Ice Since 1992, Report Reveals

You Can Queue, Too: Well-Mannered Deer Waits in Line for Ice Cream