The United States removed itself from the United Nations Human Rights Council (UNHRC) Tuesday, following more than a year of highly public protests against the 47-nation body. The US’ primary grievances are the council’s alleged anti-Israel bias and its inclusion of rights abusers.

US Ambassador to the UN Nikki Haley and US Secretary of State Mike Pompeo made the announcement Tuesday at the State Department building in Washington, DC. The announcement follows forewarnings from US diplomats and others that the US would pull out around the time of the body's reconvening in Geneva on June 18.

Pompeo began the presser by noting the Trump administration's commitment to human rights. "President Trump wants to move the ball forward," Pompeo said, adding that he has previously called out countries that "say one thing and do the other." Pompeo accused nations on the council of colluding to win elections and said its anti-Israel bias is "well-documented."

"Ambassador Haley has spent more than a year trying to reform the council," Pompeo said, adding that she's been a "fearless voice" in defending Israel.

When Haley took the podium, she reminded the press that "One year ago I traveled to the United Nations' Human Right Council in Geneva," adding that on her June 6, meeting she called for reforms, which have since "not been heeded.'" Haley announced the withdrawal from the council after calling it "cesspool of political bias."

​Haley proposed two reasons as to why the council failed to adopt her reforms. "First, there are many unfree countries that simply don't want the council to be effective. A credible rights council would be a threat to them" Haley said. "The second reason our reforms didn't succeed is even more frustrating," she said, adding that friendly nations on the council are "embarrassed" by the treatment of Israel but "many of these like minded countries were unwilling to challenge the status quo."

​Israeli Prime Minister Benjamin Netanyahu said Tuesday that Israel thanks Trump for the "bold decision" by the US to exit the UN Council on Human Rights. Meanwhile, United Kingdom Foreign Secretary Boris Johnson called the US decision "regrettable."

The latter of the US' objections with the council — the inclusion of human rights abusers on it — was elucidated Monday as a double-edged sword when UN Commissioner for Human Rights Zeid Ra'ad al-Hussein took aim at the separation of migrant children from their parents by US immigration authorities. In that light, one might note that by departing the council, the US took a step toward addressing that concern.

"The thought that any state would seek to deter parents by inflicting such abuse on children is unconscionable. I call on the United States to immediately end the practice of forcible separation of these children," Hussein said during opening remarks at the council's meeting in Geneva, which will continue until July 6, calling the practice "government-sanctioned child abuse" that could cause "irreparable harm" to the victims.

​Immigration advocates say the practice of familial separations has increased under US Attorney General Jeff Sessions' "zero tolerance" policy, which federally prosecutes border-crossers for illegal entry, separating nearly 2,000 children from their parents just in the last six weeks, Hussein said, citing US Department of Homeland Security figures. However, the separations of families was also a staple of US immigration enforcement under US President Donald Trump's predecessor, former President Barack Obama, although it isn't clear how many families were affected by the practice prior to the implementation of a zero tolerance policy.

Hussein also railed against the "growing menace of chauvinistic nationalism which stalks our future" and contributes to the decline of human rights, another possible slight against Trump.

Haley has been lamenting the council's "anti-Israel bias" since she was appointed in January 2017, Sputnik News reported after insiders started speaking to reporters about the US' "imminent" withdrawal from the body on June 15.

Haley's most high-profile challenge to the council came on June 6, 2017, when she went to Geneva to issue an ultimatum over its unfair treatment of Israel, highlighting the number of resolutions passed by the body that condemned Israel in comparison to the fewer resolutions passed against Venezuela, and threatening to leave if the body didn't address those concerns. Later in the day, she expanded on her objections during a speech to the Graduate Institute of Geneva, instead using resolutions against Iran in juxtaposition to those against Israel.

Indeed, the UNHRC has passed more resolutions that condemn Israel than it has against the rest of the world combined. It has passed nearly 80 of them since it was created in 2006, the year of Israel's war against Lebanon. She extended her objections back to the inception of the council.

In Geneva, Haley noted the high number of resolutions, calling it a "relentless, pathological campaign against a country that actually has a strong human rights record," adding that it "makes a mockery not of Israel, but of the council itself."

Since then, the US has itself lodged relentless protests against the body. Trump called it out in his speech to the United Nations General Assembly on September 19, 2017, saying that the inclusion of countries that abuse human rights was a "massive source of embarrassment" for the UN. 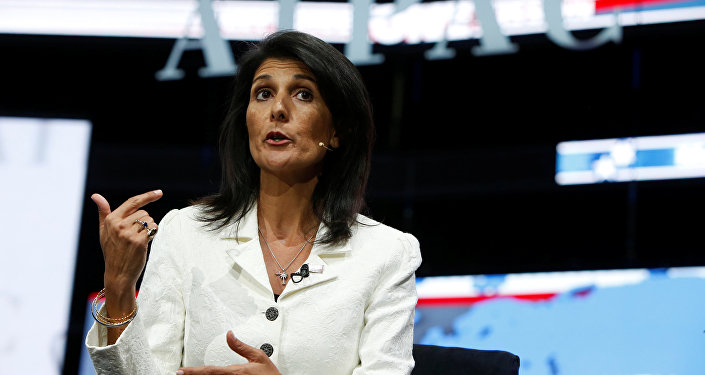 But the primary problem the US sees with the Human Rights Council is Agenda Item 7, a recurring item that requires the council to address the "human rights situation in Palestine and other occupied Arab territories" regularly when it meets. Prior to Trump's and Haley's speeches, the US State Department had also stated its opposition to the agenda item.

After the UNHRC passed five resolutions condemning Israel on March 23, 2018, following a massive outburst of violence that injured thousands of Palestinians along the Gaza border fence, Haley went so far as to call the body "foolish and unworthy of its name" over its treatment of Israel.

The US has previously boycotted the council, too. Former President George W Bush and his ambassador to the UN John Bolton — Now Trump's national security adviser — refused to participate from its inception, and the US remained on the sidelines until Obama took over the oval office in 2008. Bush's main objection was also the close attention the council gave to human rights violations in Israel.