KAZAN (Sputnik) - Escalation of tensions between Israel and Iran is dangerous, it distracts from the fight against the Daesh* terrorist group, Russian Deputy Foreign Minister Mikhail Bogdanov said on Thursday.

"The current increased tensions between Israel and Iran with their exchange of rocket fire is dangerous, as it distracts from the fight against Daesh terrorists, hampers the political settlement of the situation in Syria," Bogdanov said at a press conference on the sidelines of the Russia-Islamic World summit. 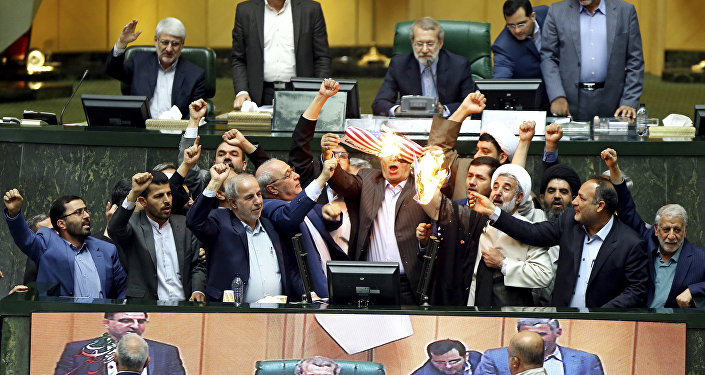 © AP Photo /
EU Can't Save Iran Nuclear Deal After US Exit - Top Iranian Military Leader
In the meantime, Abolfazl Hassan Beigi, a member of Iranian National Security and Foreign Policy Parliament's Committee claimed that his country had nothing to do with recent airstrikes on Israel, adding that rockets, fired on Golan Heights, were Syria's retaliation for Israel's "aggression".

"Iran has no military presence in Syria, no bases. Israel is lying. It was Syria that conducted strikes yesterday in response to the repeated attacks on the country. Israel must realize that the situation has changed and aggression would not go unanswered," Beigi said.

This statement comes after Israel's Defense Minister Avigdor Lieberman said that Israel's forces struck "nearly all the Iranian infrastructure in Syria" adding that no objects were hit on the territories of Israel. He also warned Iran against launching attacks on Israel.

Earlier in the day, the Israel Defense Forces (IDF) said that its warplanes raided alleged Iranian positions in Syria overnight, firing dozens of rockets into the Syrian territory in response to a barrage of Iranian rockets. IDF spokesman Jonathan Conricus said that the Israeli military had informed Russia of the planned airstrikes on Syria.

*Daesh, also known as IS, ISIL, Islamic State, is a terrorist organization banned in Russia.