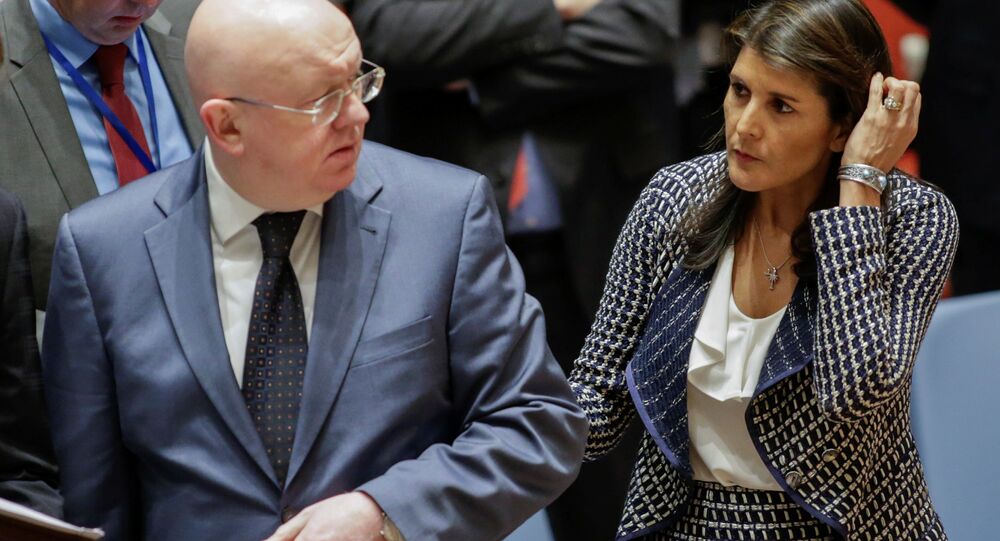 The US president’s top economic adviser, Larry Kudlow, said UN Ambassador Nikki Haley must have suffered from confusion when she announced a coming third round of anti-Russia sanctions on Sunday. On Tuesday, Haley refused to acknowledge any discrepancy or ‘false start,’ arguing, “I don’t get confused.”

Kudlow told reporters in Florida on Tuesday "There may have been some confusion" when Haley told CBS' "Face the Nation" that "you will see Russian sanctions will be coming down. [Treasury] Secretary Steve Mnuchin will be announcing those on Monday, if he hasn't already."

Haley "got ahead of the curve," Kudlow said.

The White House didn't move forward with the sanctions though, merely noting that it had been considering more sanctions but had nothing to announce as of Monday.

Not backing down, Haley told Fox News on Tuesday that Kudlow was off the mark. "With all due respect, I don't get confused," she said.

​Perhaps Haley has never pried open a book on quantum physics, or listened to a US president change his position from wanting to get out of Syria "like, very soon" to bombing Syria less than 14 days later.

As of Tuesday, there still haven't been any new sanctions announced. "We have a set of sanctions, and additional sanctions are under consideration," Kudlow said.

The new maybe-looming, maybe-imaginary sanctions would be a retaliatory measure against Russia's alleged involvement in what Western powers are calling a chemical attack in Douma, Syria.

Groups like the White Helmets argue that a chemical attack was carried out by the Syrian government, although no proof of the chemical attack, much less evidence of guilt, has been produced by any of the accusatory governments. Residents in the area told reporters the "chemical attack" was a rebel ploy to sucker Western militaries into bombing the Syrian Army while they escaped for cover.