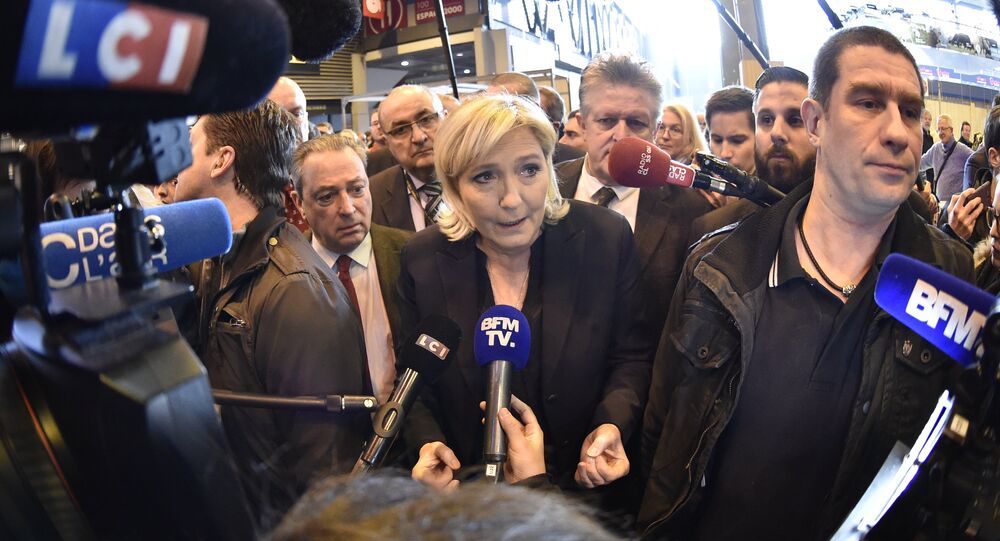 France’s best-known populist politician has expressed her utmost outrage at the outcome of prosecution that she was subjected to following her loss of political immunity.

"There has been a total shift to falsified values in France, so I will personally view these charges as a medal, a reward," Marine Le Pen, the leader of France’s right-wing populist Front National, told France 3, a television channel.

Le Pen wrote "Daesh is THIS" below the posted images. One of them showed the body of American journalist James Foley, who was executed by extremists; the picture was deleted from the account after Foley’s family weighed in and slammed the post. Another picture featured a man being burned alive.

Le Pen pointed out to the news agency AFP that in other countries the move “would have earned me a medal.” She added that the charges she was facing are "a scandal."

"One needs to denounce Islamists, to show what they are doing."

"While I am facing charges, the Daesh chief is showing off on social networks. We are acting against common sense," the politician underscored.

Le Pen recollected that French authorities supported radical movements in Syria several years ago and called for them not to repeat old mistakes.

"I remember the time when Laurent Fabius (France’s Foreign Minister in 2012-2016) stated that al-Nusra (Al Qaeda's branch in Syria) are nice guys. At that time, we were backing Syrian Islamists."

Le Pen expressed certainty that a media war had been waged against her, though she emphasized her intention to continue her fight for France and the French, despite everything.

If found guilty, the French politician, who lost her parliamentary immunity a year ago, thus becoming targeted in prosecutions over three year-old tweets, will face three years in jail as well as a €75,000 fine (about $92,000).

In France's latest presidential election, Le Pen lost to Emmanuel Macron. She made the Twitter posts denouncing militants’ acts of horror several weeks after the Paris terror attacks in November 2015, which took the lives of a staggering 129 people.

On Sunday, Marine Le Pen, when talking to France 3 broadcaster, addressed the European Union insitutions urging them to provide assistance to France battling terrorist activities in the central African region of Sahel, on the heels of the attack on the French embassy.

"Instead of financing the reception of illegal migrants, the European Union should help France in the fight with the terrorist groups in Sahel. After all, we are all alone in the region," French television quoted her as saying.

On Friday, terrorists attacked the French diplomatic mission, including the General Staff in Burkina Faso's capital of Ouagadougou. According to media reports, Burkina Faso's eight security staffers were killed in the attacks, whereas 80 people sustained injuries.

Nusrat Islam wal-Muslimin group, which is associated with Al-Qaeda terrorist organization (banned in Russia), has claimed to be responsible for the deadly attack.