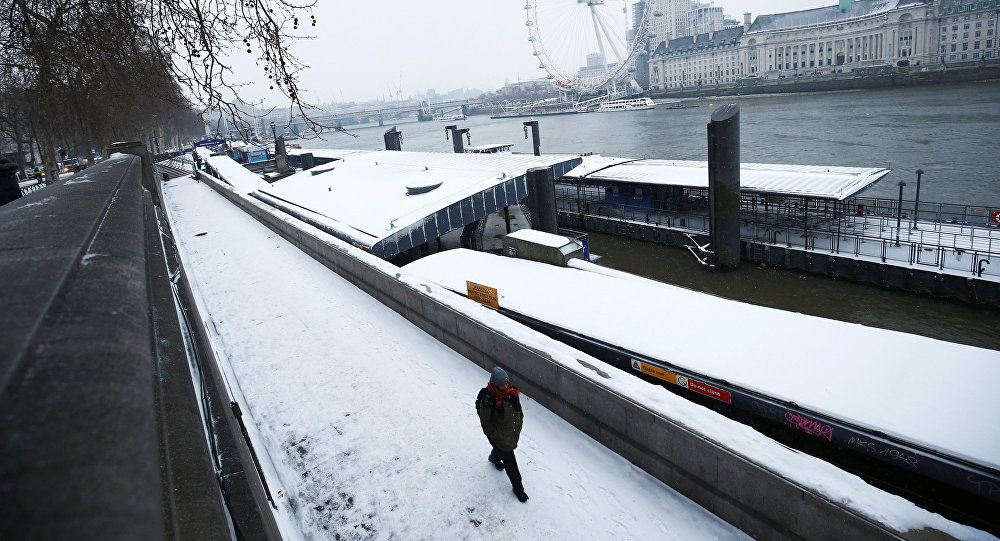 Fears are mounting that gas supplies could run out while Britain experiences sub zero weather conditions this winter after National Grid warned supplies were running low: "National gas demand today is high and due to the extreme weather conditions, there have been gas supply losses overnight," the power operator said. "At 5.45 am this morning [GMT] we issued a 'Gas Deficit Warning' to the market."

Red weather alerts, the highest possible alert meaning people's lives could be put at risk by the weather have been issued for South West England and Wales. The whole country is under a severe weather warning with heavy snow and gale force winds already halting Britain's rail and road infrastructure.

Bad news if you're on the train today #rdguk #Paddington #PaddingtonStation https://t.co/Cw2YFamf6j

We’ve just been speaking to @JSchofield93 who’s been stuck on #M62 near #Rochdale for 3 hours. He was behind a traffic officer’s car when it burst into flames trying to tow vehicles… pic.twitter.com/gmYFFhIzSR

The so-called 'Beast of the East' weather front from Siberia has already caused major disruption across Britain and Storm Emma is expected to bring more blizzards and biting winds.

It is getting pretty serious out there —
major incident now declared #cornwall #StormEmma https://t.co/W0jTSvjdsI

The extreme wintry weather is set to continue amid fears the country's gas supplies could run out. According to National Grid, the Gas Deficit Warning is "an indication to the market that we'd like more gas to be made available to ensure the safe and reliable operation of the national gas work. We are in communication with industry partners and are closely monitoring the situation," the power operator told Sputnik in a statement.

The market is feeling those deficits as #naturalgas #gas prices shot up yesterday, caused by the cold snap and limited supply from the UKCS to the UK. pic.twitter.com/NouEWTTjFT

The severity of Britain's weather has led to outpourings on social media of snow pictures, including the havoc caused by the 'Beast from the East' and Storm Emma, some more serious than others.

And over to Tynemouth where the Ice Man drinketh #stormemma pic.twitter.com/8xF1g4eOFT

Kat on our #StPancrasCRU team has been taking on the #BeastFromTheEast head-on to get to patients through the #snow, & is ready for #StormEmma!

Here she is caught on video, making good progress, with no complaints, & a smile on her face! #NHSHero

It's also received a sprinkling of synicim from twitter users in other countries where wintry snowy condition in winter, is the norm.

Everyone going mad over the Irish weather like it's survive or die 😂😂 go live in a different country in winter for a week Poland, Hungry, Germany and betcha they all survived an de snow was up to there necks!! Storm Emma what have you done to my people?.

Weather warnings in Europe — Ireland and Germany are like…. whatever… #snow #StormEmma pic.twitter.com/1BDplwyDZa

Highlanders are used to this weather, we call it spring #uksnow #redalert #metoffice

'Blizzard of the Century': Snow Apocalypse in Moscow