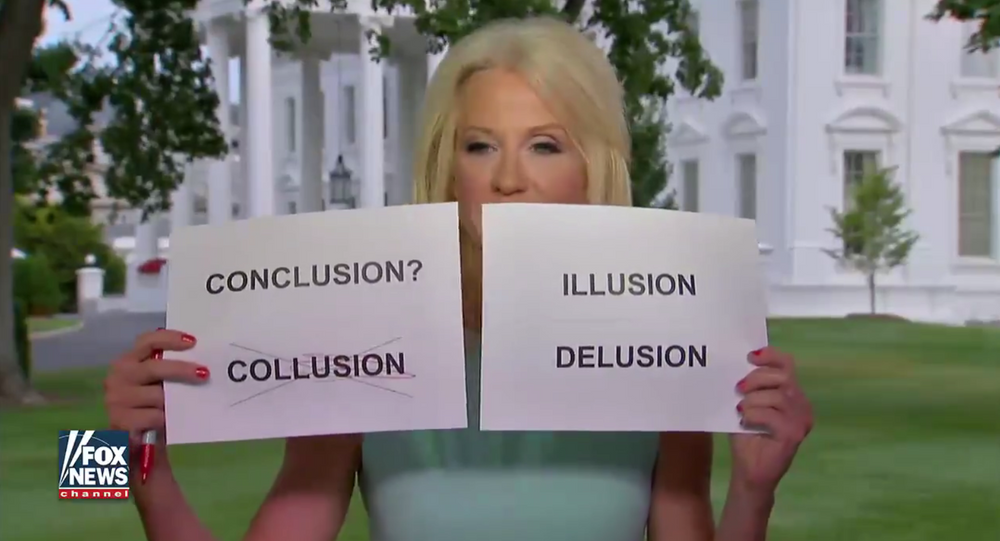 Despite the fact that the Russiagate allegations during the US 2016 vote for the head of state have materialized into an indictment paper issued the other day by the US top law enforcement executives, Washington is still failing to provide any relevant evidence.

Unless Moscow sees the facts of alleged Russian collusion in the US presidential vote, all the rest will be just idle talk, Russian Foreign Minister Sergey Lavrov stated.

"One can publish whatever they want. We see indictments, claims and statements rising in number…. So, unless we see the facts, all the rest will be just twaddle, I am sorry for my not so diplomatic expression," Lavrov said when taking the floor at Munich Security Conference.

Keep looking for that mystical Russian collusion while our country goes to hell because of the incompetence of the bloated, corrupt and politicized FBI.

Russian authorities have constantly denied all the allegations ever since the US Congress launched four separate probes into the alleged Russian gate in 2017. Vladimir Putin’s spokesman Dmitry Peskov called them "absolutely unsubstantiated," while Russian Foreign Ministry spokeswoman Maria Zakharova said the accusations of Russian meddling reflected the absurdity of the "modern American political reality."

ALERT! Don Lemon at CNN will announce that all evidence of Trump/Russian collusion has been swallowed by a black hole. @donlemon @CNN

Andrey Krutskikh, Special Representative of the President of the Russian Federation for the issues of international cooperation in the field of information security, has also weighed in the debate.

He said that instead of productive cooperation in the field of cybersecurity, Washington continues to come up with ungrounded accusations against Russian citizens and legal entities, which now constitutes the "new, bad style" of American diplomacy.

READ MORE: Now That the Trust is Gone: New Poll Shows Russians Certain of US Meddling

On February 16, the US Department of Justice rolled out an indictment against 13 Russian nationals and three entities for allegedly trying to disrupt the democratic process in the US 2016 presidential election.

The 37-page indictment, a brainchild of Special Counsel Robert Mueller’s probe, stated that those accused presumably used fake personas to exert leverage on the outcome of the elections in President Donald Trump’s favor. The document, however, does not appear to mention the Russian authorities.

Among the persons and entities targeted in the indictment paper is a research agency US lawmakers have referred to as a Russian internet "troll farm," although no evidence has been cited of the agency being related to the Kremlin.

The indictment said that Saint-Petersburg-based Internet Research Agency engaged in operations to interfere with the 2016 elections, along with Concord Management Consulting and Concord Catering, headed by Russian catering tycoon Evgeny Prigozhin.

According to the paper, the DoJ determined the so-called hotspot for Internet operations targeted the US and the server address corresponded to the one from which the "troll farm" was operating from the year of 2014.

The persons and entities are accused of undercover data collecting in the US, staging political activity, theft of data, political advertising and others.

What has happened to our Justice System? #FBI Has Been So Focused on Russian Collusion Witchhunt, It Has Failed to Follow Up On Real Clues That Would Protect Our Children & The American People. Boston Bombing, Parkland School Shooting….

According to US Deputy Attorney General Rod Rosenstein, who announced the indictment Friday afternoon, the document contains no allegation that the purported Russian meddling altered the outcome of the presidential election.

“The Russia indictment shows the Russian collusion scandal is over, as far as President Trump goes”! @TomFitton pic.twitter.com/bf7j2Prfri