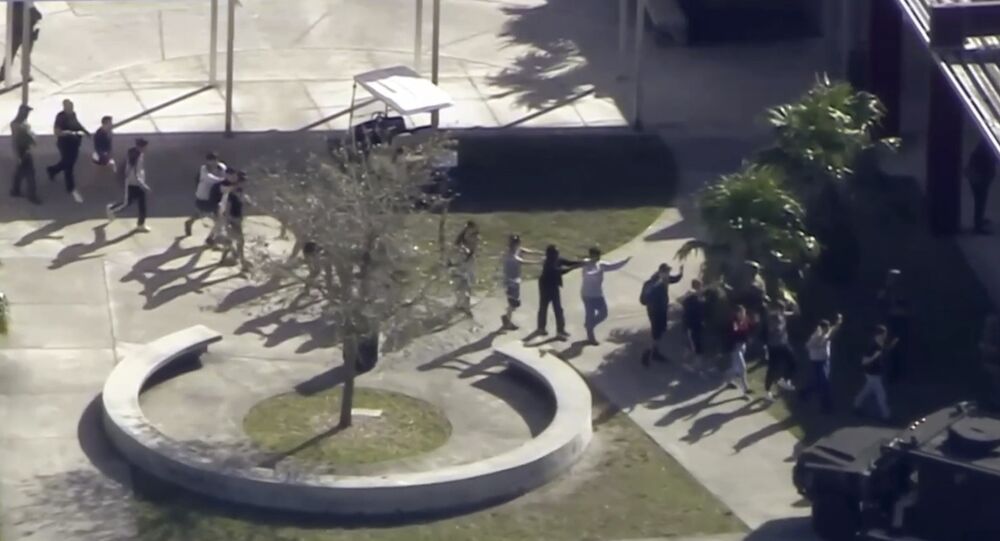 US police officers are on the scene at Marjory Stoneman Douglas High School in Parkland, Florida after receiving reports of gunfire within the school. The Margate Fire Department told local media that between 20 and 50 people are wounded or worse. One person is confirmed dead.

The school was on lock down for at least an hour while police officers and SWAT teams flooded in. The Broward Sheriff's Office stated at 4:15 p.m. local time that the shooter, Nicolas de Jesus Cruz, 19, was in custody. "There are more than multiple people dead," Brower Sheriff Scott Israel told reporters.

So far we have at least 14 victims. Victims have been and continue to be transported to Broward Health Medical Center and Broward Health North hospital. #StonemanShooting

​"Many people have been killed," said US Senator Bill Nelson, a Florida Democrat. "It is quite alarming, but it appears there are a number of fatalities in this terrible tragedy." The local school superintendent confirmed "there are numerous fatalities" but was not able to specify a number.

AVOID AREA OF DOUGLAS HS for ACTIVE POLICE SCENE. Do not call 911 unless an emergency. Nothing further.

A slew of ambulances were present at the high school, and several people have been seen being taken out of the school perimeter on stretchers.

LIVE: Another senseless shooting, this time at local Stoneman #Douglas High School in Parkland, Florida. Prayers to all the kids, teachers and staff! 🙏🏾 pic.twitter.com/fuft0vIias

​The Broward Sheriff Office said: "Here's what we know so far: deputies are responding to reports of a shooting at Stoneman Douglas High. There are reports of victims."

Avoid the area of Stoneman Douglas HS. #BSO is currently working a developing incident regarding a report of active shooter.

In the first 45 days of 2018 the US has experienced 18 school shootings. The tragedies have occurred so frequently that activists say the incidents have numbed Americans to the regularity of gun violence.

Today, close to Marjory Stoneman Douglas High School’s dismissal, students and staff heard what sounded like gunfire. The school immediately went on lockdown but is now dismissing students. We are receiving reports of possible multiple injuries. Law enforcement is on site.

​Nearly 300 school shootings have occurred since 2013, equivalent to about one per week.

Some students have been filed out of the building, where parents are waiting. There are about 3,200 students enrolled at the school.

"The President has been made aware of the school shooting in Florida," White House Deputy Press Secretary Lindsay Walters said. "We are monitoring the situation. Our thoughts and prayers are with those affected."

My school is being shot up and I am locked inside. I’m fucking scared right now. pic.twitter.com/mjiEmPvGNb

​Florida Governor Rick Scott has been in contact with the police at the scene as well.

NEW: Photo from a student in the school barricaded in a classroom at Marjory Stoneman Douglas High where an active shooter incident is underway pic.twitter.com/rBVrENjtCM

Superintendent confirms there *were* police officers stationed at Stoneman Douglas High School but obviously could not stop shooter pic.twitter.com/Et9hAnhWiX

​Trump sent "prayers and condolences" to families affected by the "terrible" shooting in a tweet. Many people have said that thoughts and prayers have accomplished little in reducing the number and severity of school shootings.

Today we experiencing the worst of humanity as an unspeakable tragedy has hit our @browardschools family at Marjory Stoneman Douglas HS. There has been a shooting on campus with injuries and fatalities. We are working with law enforcement as we pray for our babies and families.