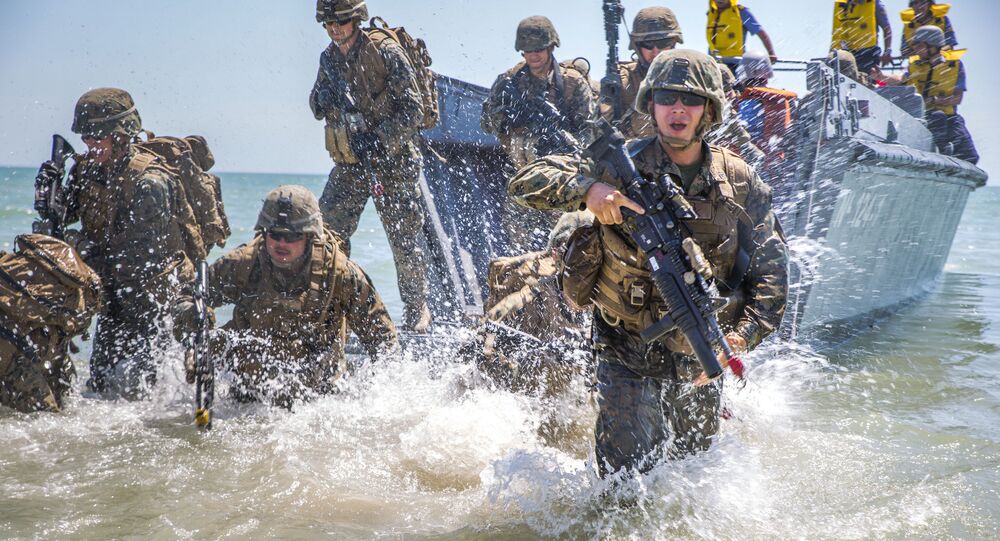 The Pentagon is eyeing the prospect of boosting its military build-up in East Asia, fearing China’s increasing power in the region, and ready to fund the expansion through cutbacks in the Middle East. The move appears to closely follow the newly signed National Defense Strategy which will apply for the next few years.

According to a report by the Wall Street Journal, the Pentagon is considering plans to send heavily armed, versatile Marine Corps Expeditionary Units [MEU] to East Asia, citing  soaring Chinese influence in the region. While it’s still unclear how many MEU groups will be deployed, it is known they will be rotated every seven months.

An MEU is a group of about 2,200 Marines who operate from amphibious assault ships and have their own weaponry, aircraft, tanks and else equipment.

.@thejointstaff #GenDunford finishes latest trip to Asia-Pacific reinforcing America's history in the region and planning for US future as a Pacific nation. The chairman stopped in Wake Island, @DeptDefence Australia, Thailand and Pearl Harbor/Hickam. https://t.co/4CsxOkBPvS pic.twitter.com/jlBdDA341I

Speaking to the newspaper, General Robert Neller stated that the strategy was hoped to shape the US’ naval presence, primarily in the Indo-Pacific region, with the Pentagon expanding the number of Marines deployed in Australia’s Darwin.

The MEUs, which are intended as a quick reaction force, could conduct patrols and military training with US allies in the area, as well as respond in the event of a confrontation.

Australia needs to understand China at least as well as we understand the US especially at a political and public service level. Our future is tied up with China in almost all respects.

In accordance with the new National Defense Strategy published earlier by the Trump administration, the deployment costs will be covered at the expense of the US military presence in the Middle East, as the aforementioned document, which stays in effect for another four years, sets countering Russia and China as a priority for the US military. According to the report, the MEUs in East Asia will help the US "persuade Pacific nations to stand with the US."

The US military has a huge footprint across south-east Asia and the Pacific, particularly in Japan and South Korea, amid continual threats of the North Korean nuclear strike.

According to Department of Defense data, 39,345 US troops are stationed across 112 Japanese bases. Separately, South Korea hosts a large number of US military forces, with 23,468 personnel on duty at 83 sites. More than 300 tanks, including the powerful M1 Abrams, and armoured vehicles are stationed there.

However, Guam, a US territory in the western Pacific Ocean run by an elected governor, has long been in the spotlight due to its proximity to Pyongyang: there are 3,831 military staffers on Guam, and much of the land is controlled by the armed forces, including the Anderson air force base, which hosts B52 bombers and fighter jets.

Despite fears expressed by the US Defense Department with regard to China's growing influence in the region, earlier there emerged reports on the US military inviting the key Asian player to cooperate with the US in terrorism-shattered Afghanistan.

In response to a question from Democratic Senator Chris Coons about whether China could be a full-fledged partner in the country assistant secretary for Asian and Pacific Affairs Randall Schriver said:

"I think there is the possibility that China on the counterterrorism front could be a partner. They certainly have their own concerns about terrorism within China and the potential for linkages between terrorist groups operating elsewhere and for that to seep into China."

"Historically, we have run into some difficulties — what they define as a terrorist, particularly inside China and the way we look at things, there's an important difference there — but they do have an interest in stability in Afghanistan," he added.

He went on to say that cooperation with China in Afghanistan is an agenda item, namely "how we can ensure that they are a constructive participant in the process that's underway in Afghanistan."

The news comes after reports early this year that China is testing the ground for its own presence in Afghanistan. Central Asian news agency Ferghana reported in January that China will build a new military base for the Afghan Armed Forces in the northern province of Badakhshan, citing an Afghani defense official. The reports, though, were shortly refuted by China's defense officials.