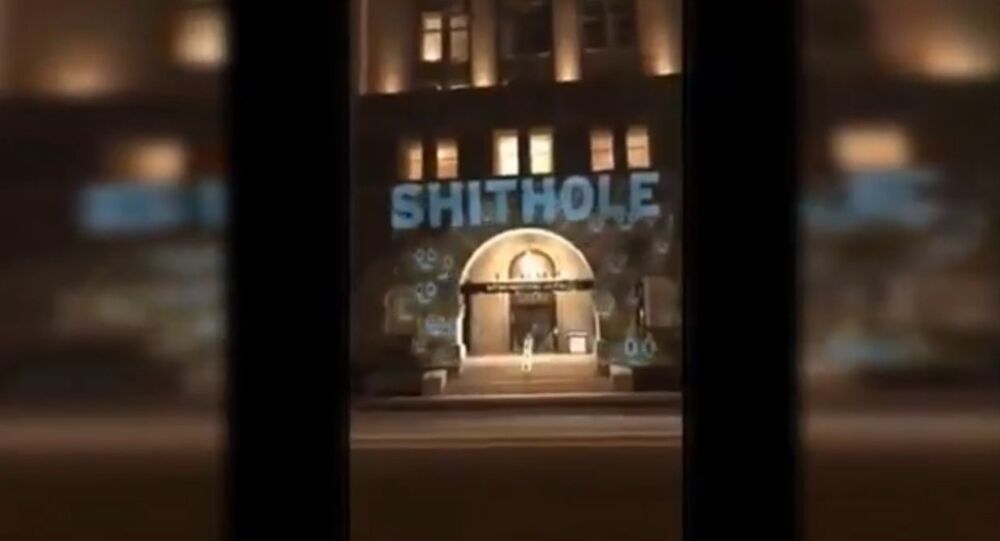 There has been no shortage of reactions to Trump's "shithole" remark he allegedly made during the notorious immigration meeting with lawmakers on Thursday. But perhaps the most extravagant feedback arrived only today.

Robin Bell, who is known to have performed other protests as well, projected the word "shithole" — with which President Donald Trump allegedly referred to countries from which he does not favor immigrants coming to the US — over the entrance of the Trump International Hotel in Washington, just a stone’s throw from the White House, according to a video posted on Bell’s Twitter account.

One of the pop-up messages on the walls read the following:

"NOT A DC RESIDENT? NEED A PLACE TO STAY? TRY OUR SHITHOLE. THIS PLACE IS A SHITHOLE."

Robin Bell is my personal hero — Trump is first of all a salesman and kleptocracy- anything that addresses that is ok by me. Thanks

A flood of grinning emoji poos then streamed out of the hotel's entrance as "SHITHOLE" appeared in capitalized letters above it. In another loop, the word "shithole" was accompanied by an arrow pointing to the Trump hotel entrance.

@Alyssa_Milano @DebraMessing @bellvisuals Help fund the artist, Robin Bell, who projects social injustices (and responsible for shithole project). Thank you Robin for projecting the injustices-and may I say..the shithole project is my new fav! https://t.co/8xBcLidfXo

Earlier, Trump flatly denied on his Twitter the comments he reportedly made with regard to immigrants from African nations, Haiti and El Salvador, raising the question of why they should be more likely accepted in the US than, for instance, newcomers from well-off Norway.

Democratic Senator Dick Durbin who was present at the meeting confirmed "shithole" was the exact word used by the US president, recollecting the "hate-filled, vile and racist" things Trump supposedly said.

The news has prompted severe international outrage, as people posted outspoken comments on Twitter, posted breathtakingly beautiful pictures of Haiti and African countries, or, conversely, "shithole" scenery of some American locations, aimed to illustrate that lousy places can be found all around the globe. Most recently, South Africa's foreign ministry called Trump’s alleged remarks "crude and offensive" and said Trump's subsequent denial was not categorical.

The chorus of global condemnation of Trump’s supposedly racism-charged words was led by El Salvador, Cuba, Mexico, the UN human rights agency, and others.

Vicente Fox, a former Mexican President, who served from 2000-2006, even came up with a poll he posted on his Twitter on Saturday, asking his followers whether Trump's racist and barbaric comments while campaigning would have changed the outcome of the presidential vote. Most of his readers, however, answered in the negative.