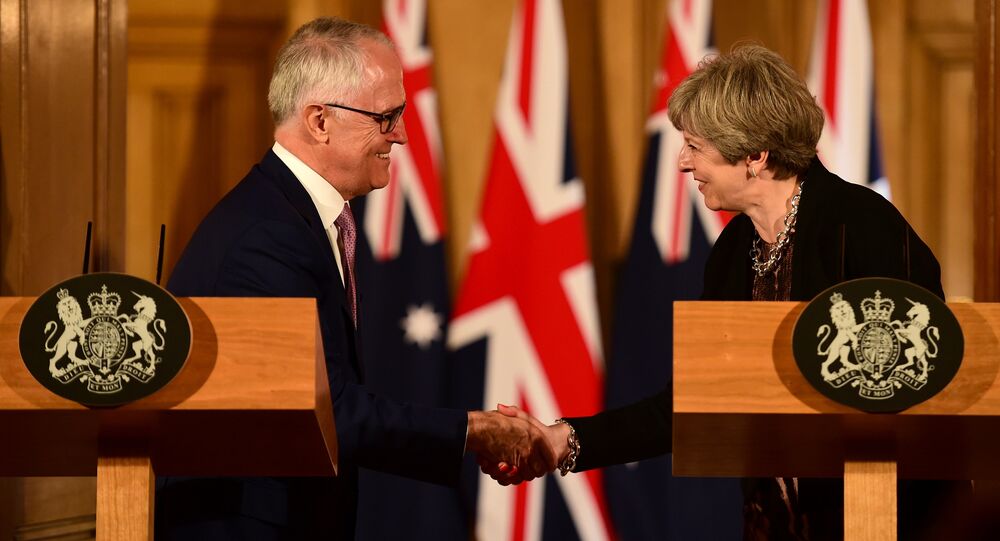 The Australian government released its future foreign policy blueprint in a 136 page white paper on November 22, which made no special reference to expanding the relationship with the United Kingdom leading some observers to suggest that Britain is increasingly irrelevant to the Asia-Pacific nation's strategic vision.

​While Australia has repeatedly expressed interest in a post-Brexit free-trade agreement with Britain, it has maintained that its current negotiations with the European Union take precedence.

"I think it's increasingly untenable on her part. There's this kind of sentimental, nostalgic idea amongst some people that we suddenly can turn the clock back to the time when Australia, Canada and New Zealand were Dominions and we had special relationships with them," Dr. Smith told Sputnik.

UK Prime Minister Theresa May has repeatedly outlined her desire for Britain post-Brexit to operate under conditions of completely free trade and develop new partnerships with China, India, the US and GCC states.

Australia and New Zealand are the UK's priority for a post-Brexit trade deal, "after the United States", says Fox

​Dr. Smith further explained that it will be far harder for Britain re-forge trading arrangements with countries that are so far-flung.

"Most countries in the world trade within groups and there are negotiations between those groups. There are very few states across the world that trade "openly." There are collections of states who trade and have specific relationships," Dr. Smith explained.

Australia-UK Relationship That Was

Former Australian Prime Minister Tony Abbott, while initially encouraging Britons to vote Remain, in 2016, enthusiastically embraced the UK's decision to exit the European Union and called for absolutely free trade between Australia and Britain after Brexit.

The former Pacific colony was among the first countries to establish a trade-mission in London to seek out possibilities for a post-Brexit trade expansion.

Britain was Australia's principal trading partner and effectively controlled its foreign policy until around 1945, when the Australia New Zealand United States (ANZUS) Treaty drew the Pacific nation away from its colonial parent.

Brexit, Beyond the Seas: Where the UK Will Forge Its Post-European Future