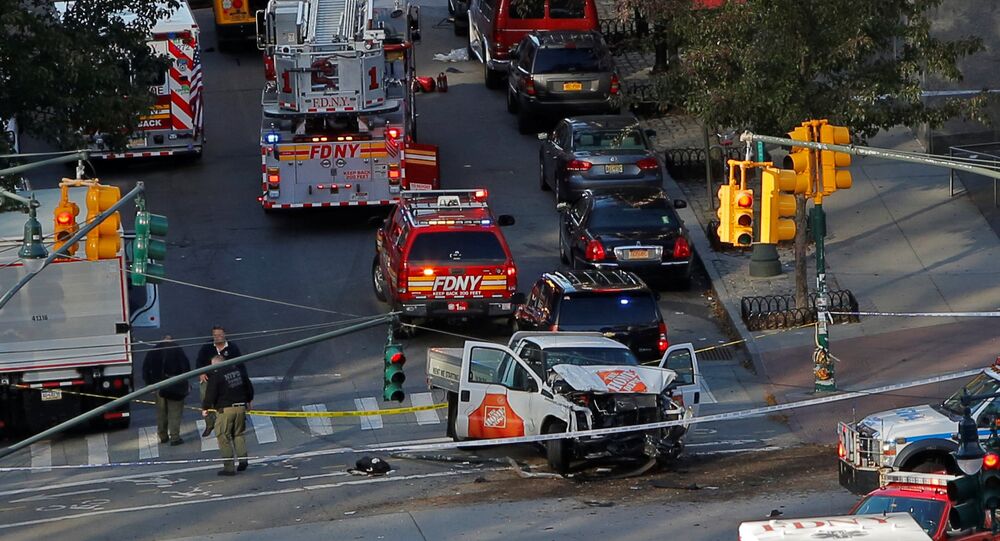 Eight people are dead after a man drove a truck down a bike path in Lower Manhattan, striking cyclists and pedestrians, in an act that is being treated by law enforcement as an act of terrorism. Eleven more were seriously injured in the attack.

The October 31 attack constitutes the most lethal terror attack on New York City since 9/11. Six victims were pronounced dead on the scene of the crime, while two more people died at the hospital. Eleven of the people who were hurt have serious, but not life threatening, injuries, city officials and law enforcement officers confirmed at a press briefing early Tuesday evening.

The suspect was shot by police officers after exiting the rental truck holding "imitation firearms," and taken into custody alive, the New York Police Department said via Twitter shortly after the event. A pellet gun and paintball gun were found at the scene.

​Upon stepping out of the car, the assailant yelled "Allahu Akbar," Arabic for "God is Great," eyewitnesses told the police. The vehicular attack is being investigated by the FBI Joint Terrorism task force as a "suspected" terror attack, Channel 4 New York reported on TV. Addressing reporters Monday evening, the NYPD commissioner said the statements made by the attacker were "consistent" with a terrorist attack.

The suspect drove a rented Home Depot truck, pictured below, drove down a popular bike and walking path for 10 blocks mowing down civilians. A school bus eventually got in the automobile's way to limit the destruction, according to an eyewitness. Two adults and two children aboard were injured.

​The NYPD would usually have jurisdiction over a crime in New York but the FBI can overrule their jurisdiction depending on the nature of the crime.

​At least one police officer was injured, emergency medics said.

UPDATE: At least two people struck and killed, several others struck and injured along the West Side Highway. pic.twitter.com/LMWhi0ig7t

​"Currently there is one person in custody," the New York Police Department stated. "No other outstanding. All information is preliminary as the investigation is ongoing," NYPD said in a Twitter post.

US President Donald Trump has been apprised of the attack.

Vehicles have been used by alleged terrorists at an accelerating rate. The attacks on Barcelona, Spain in August, the London Bridge in June, and the Berlin Christmas market last December also featured an automobile as the primary tool for inciting mayhem.