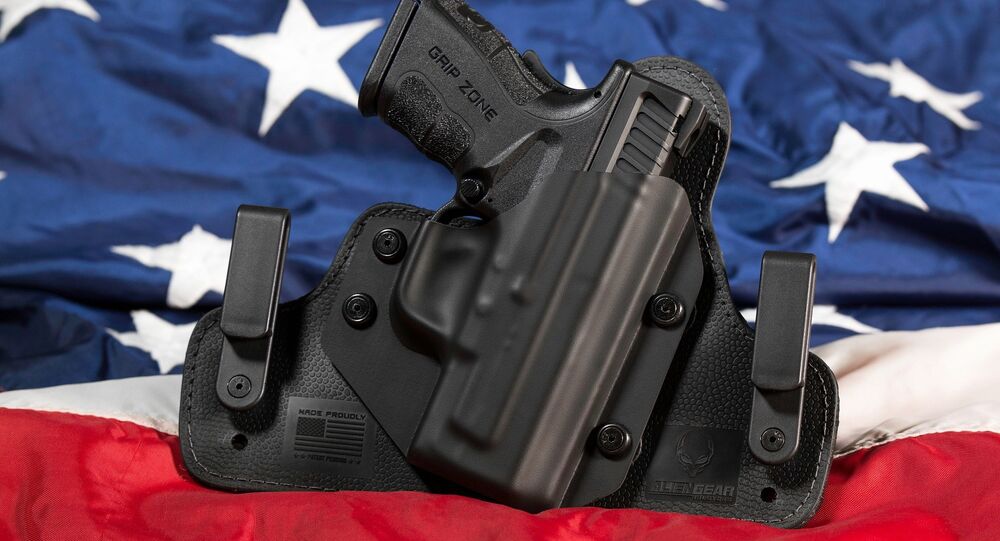 September 15 marks the 51st anniversary of President Lyndon Johnson calling on US Congress to enact gun control legislation, in the wake of a college campus killing spree. Such incidents have only become increasingly familiar since.

On September 15 1966, in response to a mass shooting at the University of Texas, then-President Lyndon B. Johnson called on Congress to enact gun control legislation. Passed two years later, it represented a significant dilution of its original intended principles — and Johnson blamed the "voices of a powerful lobby" for the diminution.

The August 1 incident, in which mentally disturbed Charles Whitman went to the University of Texas armed with a bolt action Remington 700 sniper rifle, climbed to a 28th floor observation deck killed 14 people and wounded a further 32 before being killed by a police officer, provided yet further ammunition to gun control advocates in the US.

Ever since the November 1963 assassination of President John F. Kennedy, public and political calls for restrictions on the purchase and ownership of firearms had gathered in volume, although nothing was done legislatively due to fierce opposition in certain quarters of Congress.

Despite intense debate among legislators, President Johnson's call was ultimately stonewalled — and it would not be until 1968, and the murders of Martin Luther King and US Senator Robert F. Kennedy, action would finally be taken by lawmakers. The Gun Control Act was passed in October that year, banning mail order sales of rifles and shotguns and prohibiting most felons, drug users and people found mentally incompetent from buying guns.

Upon signing the act into law, Johnson remarked that the bill was significant, but inadequate.

"Congress adopted most of our recommendations. But this bill-as big as this bill is-still falls short, because we could not get Congress to carry out the requests we made of them. I asked for the national registration of all guns and the licensing of those who carry those guns. There are over 160 million guns in this country-more firearms than families. If guns are to be kept out of the hands of the criminal, the insane, and the irresponsible, we just must have licensing. If the criminal with a gun is to be tracked down quickly, then we must have registration in this country. The voices that blocked these safeguards were not the voices of an aroused nation. They were the voices of a powerful lobby, a gun lobby, that has prevailed," he said.

​In 2017, the number of guns in circulation in the US stands at between 300 million and 420 million — and despite frequent mass-shootings since, US gun ownership rules have not been substantially reformed.

Then as now, gun lobbying groups are blamed for the lack of progress on gun control — in particular the National Rifle Association (NRA), a firearm ownership advocacy group that boasts vast resources and a passionate membership base of around five million US citizens. These members are rarely idle — they provide the group with an illimitable reservoir of grassroots campaigners.

From January 1 to June 30 2017, the NRA spent US$3.2 million on lobbying — more than it did in the entirety of 2016. Organizations that actively lobby US lawmakers are required to file quarterly lobbying reports with the Clerk of the House of Representatives and the Senate Office of Public Records, which document the individual bills in which groups have taken an active interest.

Filings show the NRA lobbied 81 pieces of legislation in the first two quarters of 2017, with two major bills looming largest in the group's considerations.

The Hearing Protection Act seeks to end restrictions on silencers. Increasingly popular firearms accessories, owners are legally obliged to register the devices, a process that takes months and costs US$200. The Act would remove these regulations.

The Concealed Carry Reciprocity Act would require states to recognize all other state's concealed-carry licenses, making permits valid anywhere their holders choose to exercise them. Currently, a number of states decline to recognize concealed gun licenses from states with lower firearm training and eligibility requirements, meaning guns must be prominently displayed by individual carriers.

The NRA's lobby activities aren't isolated to Congress — official filings also indicate the Association has further tried to pressure the Departments of Agriculture, the Interior and Justice, the Fish and Wildlife Service, the Bureaus of Land Management and Alcohol, Tobacco, Firearms, and Explosives, and the Forest and National Park Services.

With Donald Trump in the White House, NRA representatives have likely found receptive departmental ears — or at least more amenable audiences than under Barack Obama. On his first day in office, Secretary of the Interior Ryan Zinke revoked an Obama-era ban on the use of lead ammunition in wildlife refuges. The Department of Justice has also shut down a financial crimes probe — Operation Choke Point — the NRA claimed unfairly targeted gun dealers. The ATF has also invited silencer companies to help the Agency streamline the process for National Firearms Act permit applications.

The Association has been accused of resorting to scaremongering marketing tactics to boost gun sales in response — particularly in June, when NRA spokeswoman Dana Loesch appeared in a video ad that many perceived as a call to violence against anti-Trump protesters.

"[They] smash windows, burn cars, shut down interstates and airports, bully and terrorize the law-abiding until the only option left is for the police to do their jobs and stop the madness. The only way we stop this, the only we save our country and our freedom, is to fight this violence of lies with the clenched fist of truth."

The NRA arguably has little to worry about. Between 2011 and 2016, US lawmakers introduced over 100 gun control proposals in Congress, and not one of them was passed into law — very few of the proposals even made it to a House or Senate vote. This legislative failure persists despite polls consistently showing support for stricter gun control laws far outweighing support for current laws, or indeed their relaxation. Moreover, public backing for tighter gun control laws has fallen fairly consistently over time, from 78 percent in 1992 to 55 percent in 2016.