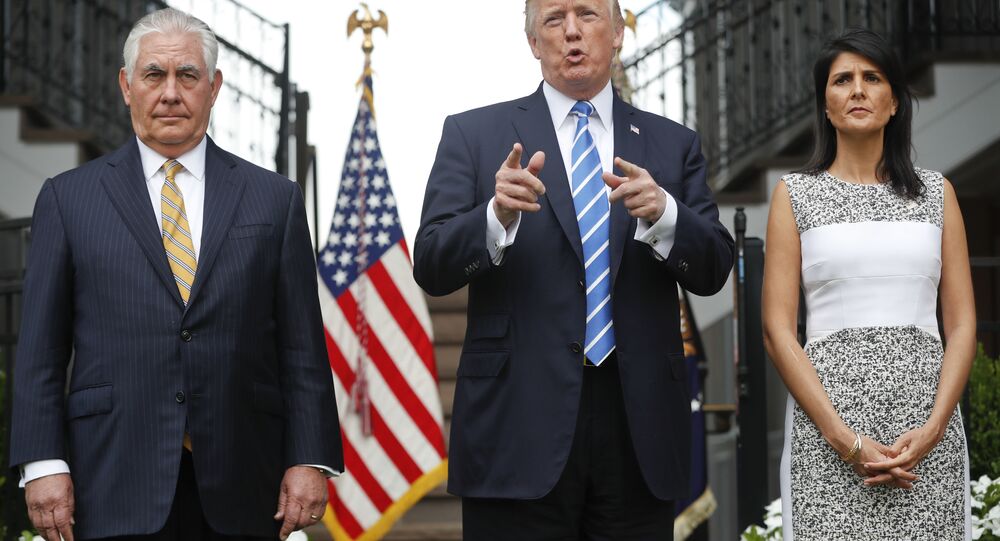 On Friday, US President Donald Trump said that Washington has a menu of options for dealing with the crisis in Venezuela, noting that "a military option is certainly something we could pursue."

"The people are suffering and they're dying" there, Trump said.

"We have many options for Venezuela including a possible military option if necessary."

Trump has so far not discussed the possibility of using the wide range of Pentagon powers to resolve the current situation of unrest in the South American nation. Still, the US administration has accused Venezuelan President Nicolas Maduro of being a "dictator." On Wednesday, the US Treasury Department issued yet more sanctions on Venezuela, which Moscow said posed an obstacle to normalizing and stabilizing the situation there.

The formation of the Venezuelan National Constituent Assembly, which describes itself as the country's main governing body, on July 30 was condemned by Washington. The new legislative body has the power to change Venezuela's constitution, a step critics have called undemocratic and supporters say will help further socialist reforms.

While the US public waited for Trump to explicate next steps regarding North Korea, he said plainly "I think you know what that means" when asked about his Friday morning tweet that the US is "locked and loaded" and ready for battle.

Carlos Ron, charge d'affaires at the Venezuelan Embassy in Washington, said of Florida Senator Marco Rubio and CIA Director Mike Pompeo, what "this group is trying to do with Venezuela is basically divide the government, recognize other leaders and foment a conflict with the Venezuelans," the Miami Herald reported July 25.

"I'm always careful when we talk about South and Central America and the CIA, but suffice to say, we're very hopeful there can be a transition in Venezuela and we [are] doing [our] best to understand the dynamic there, so that we can communicate to our State Department and to others," Pompeo said on July 26 during a Q&A session at the Aspen Institute.

The Pentagon "has received no orders" to initiate any new actions in Venezuela as of Friday night, according to a spokesman.

North Korean Leader to 'Regret' Any Further Threats Made to US, Allies - Trump

From New Jersey Vacation, Trump Tells GOP Leader to ‘Get Back to Work’