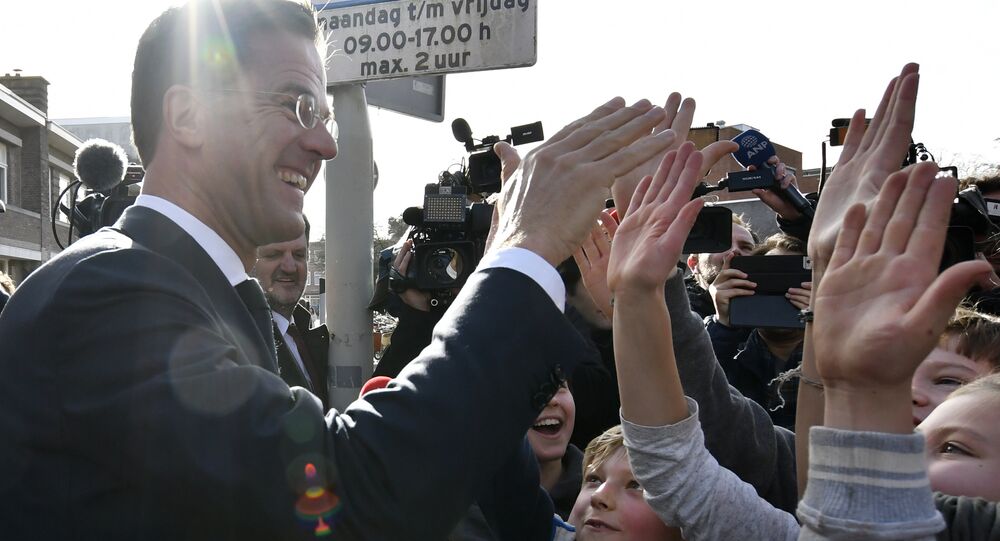 A key exit poll in the Netherlands is showing the Mark Rutte will likely emerge victorious from the nation's Wednesday election, while right-wing nationalist Geert Wilders reportedly had a poor showing.

Wilders' Party for Freedom won 19 of 150 seats in Dutch parliament, according to preliminary exit poll. The nation's 13 million votes had until 9 p.m. local time to cast their ballots. Wilders has proposed banning the Quran from the Netherlands and issuing a ban on immigration from citizens from majority-Muslim countries. Rutte will need to form a coalition government, reports suggest.

© AP Photo / Yves Logghe
Dutch populist and euro-sceptic Geert Wilders displays a yellow star he cut out of the EU flag, during news conference, in front of the European Parliament in Brussels (File)

The Pary for Freedom's 19 seats are fewer than analysts had projected. Exit polls reported that less than one in seven Dutch voters voted in favor of Wilders' party.

Wilders has broadcasted numerous inflammatory comments in his bid to drive Dutch politics to the right. He has said "immigration from Islamic countries should be forbidden," that the Muslim faith is "the Trojan horse of Europe" which will convert Europe in Eurabia and the Netherlands in Netherabia, and "I hate Islam."

The coalition could include at least four parties.