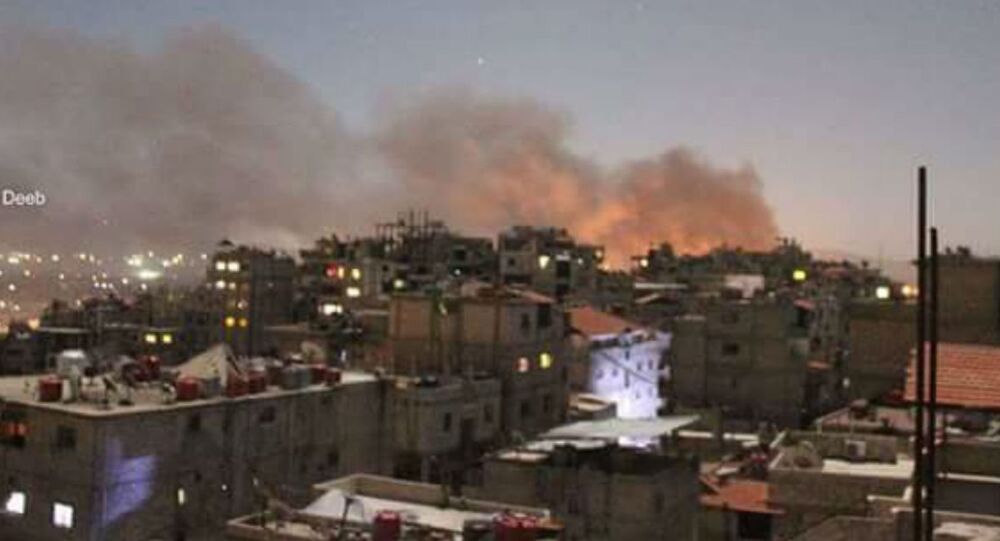 A Mezzah military air facility was struck by several explosions near the Syrian capital of Damascus. Israeli rockets took aim at an ammunitions hub, producing an enormous explosion, according to Syrian state TV.

"Rockets strike at Mezzeh Military airport in Damascus minutes ago," Hadi al-Bahra, former president of the National Coalition of Syrian Revolution and Opposition Forces said on Twitter in the early hours of Friday, posting pictures of the explosions. The blasts were reportedly caused by heavy bombing conducted by Israel, local activists and journalists reported on Twitter.

The airport is a major strategic asset used by Syrian elites, military officials and troops as a transit complex.

​The Syrian government also used the airport as a military outpost to launch artillery shells at former rebel-held areas in the suburbs of Damascus.

​The death toll from the attacks has yet to be determined, according to a journalist on the ground. The airstrikes "may have taken out Syrian commanders," according to Georgetown Center for Security Studies' John Arterbury.

Earlier in the day, a suicide bomber killed seven people and left many more wounded.

Following the attacks, a Syrian Army spokesman warned that Israel would face repercussions of the "flagrant" attack on the Mezzah military airport. A spokesman was also quoted on Syrian state TV saying that the projectiles originated near Lake Tiberias in northern Israel just after midnight.