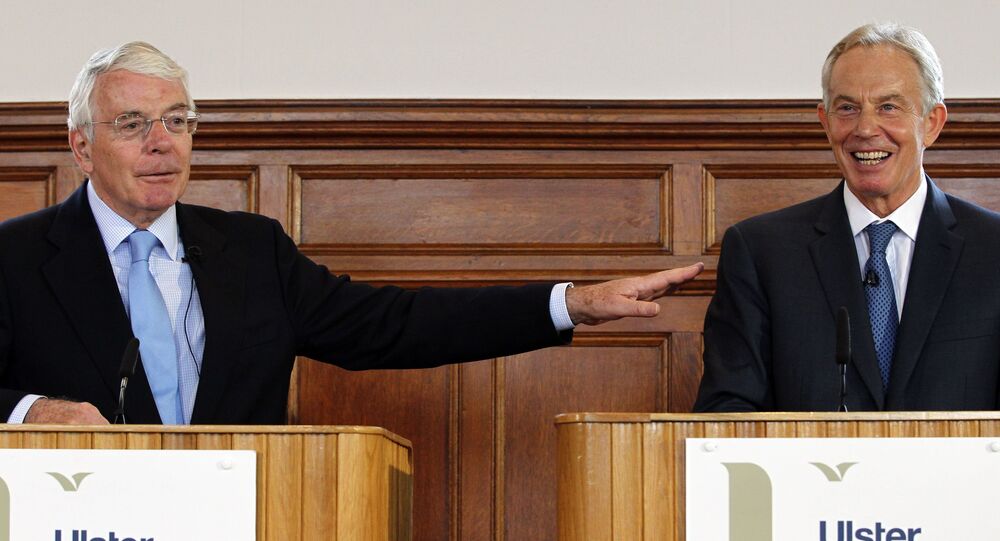 Former British Prime Ministers Tony Blair and John Major have both been accused of fluting the "clear wishes of the people" who voted to leave the European Union in the In-Out referendum, June 23, Sputnik has been told.

Britain voted by 52 percent to 48 percent to leave the European Union at the referendum held after years of animosity over Britain's membership of the EU, which critics saw as being dominated by Brussels, a loss of sovereignty and an inability to control immigration.

However, both Major and Blair have suggested — for different reasons — a second referendum could be called.

Major believes that — although he respects the vote to leave the EU — he thinks there should be a referendum on the terms of any new relationship with Brussels.

Blair, on the other hand, says that many people who voted in the referendum may not have been sure about the consequences of their vote and should be given a second chance to consider the outcome of the negotiations.

Former PMs who refused our country a EU referendum now want a second one- take a hike!

​However, a leading campaigner to leave the EU and former deputy speaker of the House of Commons, Nigel Evans told Sputnik:

"The people have spoken after a full and tough referendum campaign. John Major and Tony Blair both took part in that debate and campaigned for Remain. The people voted leave.

"They both refused to give the people a vote on any aspect of EU integration during their time as PM. The UK ended up being deeper in the EU project thanks to their approach; this development was rejected by the people.It was a clear result and the people voted to leave and that is what Theresa May is respecting. It's called democracy and it is the very essence of this which is now under attack by this campaign to flout the clear wishes of the people to be out of the EU," Evans told Sputnik.

Blair argued, in the New Statesman magazine, that Brexit could be halted.

"It can be stopped if the British people decide that, having seen what it means, the pain-gain cost-benefit analysis doesn't stack up. And that can happen in one of two ways. I'm not saying it will [be stopped], by the way, but it could. I'm just saying: until you see what it means, how do you know?" said Blair.

I agree with #LeaveMeansLeave. Blair & Major are wrong to despise the decision of #eureferendum and say we should now #Remain

​Major — as prime minister and leader of the Conservatives — was responsible for signing the Maastricht Treaty, which considerably changed the landscape of the European Union. Blair, meanwhile, signed the Treaty of Lisbon, which also made extensive amendments to the EU.

Major never backed a referendum over Maastricht, but Blair did — over Lisbon — but cancelled it when France and the Netherlands rejected the treaty, leading the European Council to sign it into existence without further referendums.