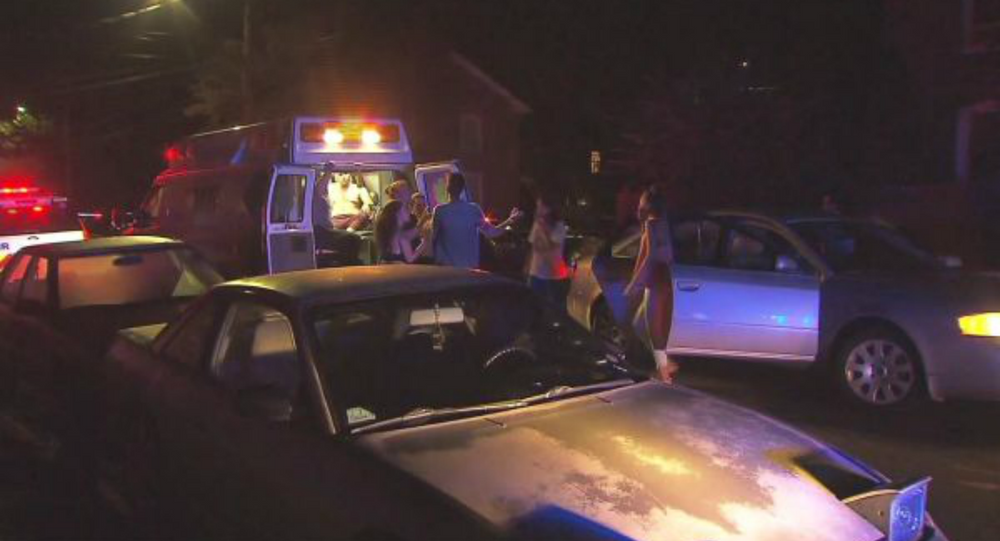 Less than 17 miles from the scene of the horrific mass shooting of a schoolhouse in Sandy Hook, two gunmen armed with assault rifles opened fire on a crowd of 100 people.

Thirteen people were shot and wounded when two gunmen opened fire into a crowded house party from a neighboring backyard in Bridgeport, Connecticut early on Sunday, said local police.

The city’s police said that they received a call just before 1:30am and arrived to find 11 men and two women suffered gunshot wounds, Captain Brian Fitzgerald said in an emailed statement. One of those wounded in the attack remains in critical condition after being shot in the face.

It is believed that at least two shooters fired through the hedges from the backyard into the “large house party” according to the statement. An investigation is ongoing and police have not indicated that the perpetrators have been arrested or what their motive for the attack may have been.

Following the horrific Sandy Hook shooting of an elementary school by Adam Lanza, the state of Connecticut enacted some of the strongest gun laws in the country.

The Brady Campaign to Prevent Gun Violence ranked Connecticut the state with the 5th most stringent gun controls. The state requires universal background checks, has placed a ban on "high capacity" magazines, and has implemented an "assault weapons" ban in response to the terrible tragedy.

Neither presidential candidate for a major political party, Donald Trump and Hillary Clinton, have issued a response regarding the shooting. The issue of gun control is a key issue for both candidates with Donald Trump calling for a relaxation of what he views as anti-gun legislation while Hillary Clinton wants families to be able to sue gun manufacturers – a position both Trump and Hillary’s primary election rival Bernie Sanders said would bring an end to the gun industry and the Second Amendment altogether.

Was Orlando Really the 'Worst Mass Shooting in US History?'

The Man Behind America’s Bloodiest Ever Mass Shooting Spree