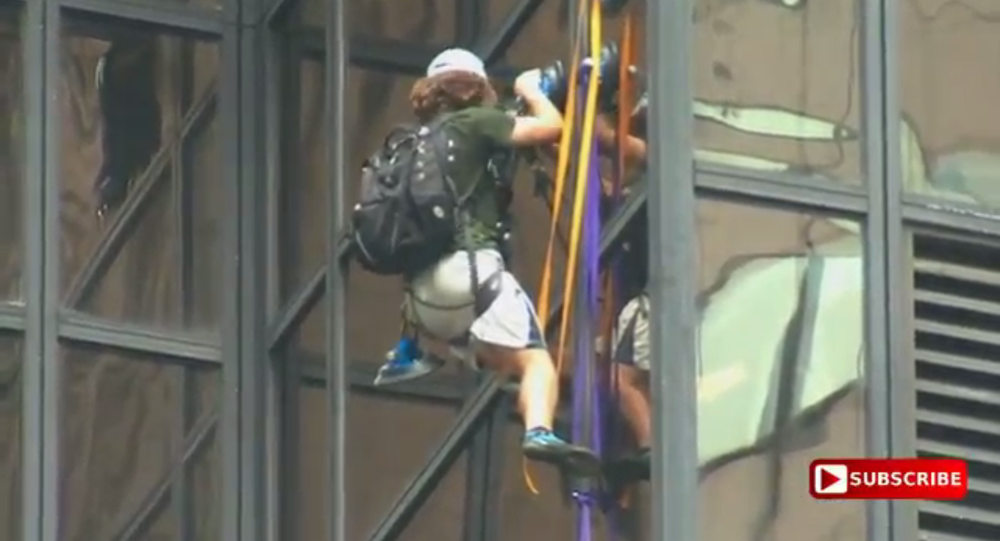 On Wednesday afternoon a man dressed in high-end mountain climbing gear began to climb the side of Trump tower as though it were Mount Everest.

If you thought that the 2016 US presidential election cycle could not get any stranger one day after one candidate allegedly called on "Second Amendment people" to shoot down former First Lady and former Secretary of State Hillary Clinton only hours after Hillary was discussing the need for Orlando to come together in the wake of the tragic terror attack with the Daesh terrorist's father sitting only five feet behind her in the frame — well yes, it can get a whole lot crazier.

​On Wednesday, that is precisely what happened when a climber, dressed in what appeared to be high-end mountain climbing gear, began his methodical ascent up Trump Tower using suction cups to advance floor by floor of the mountain, I mean Trump Tower.

​"Guy just came into my lobby saying that a person is currently climbing up the #Trump building in Midtown #NYC using suction cups," wrote Peter Shankman on Twitter.

​What the political meaning of the semi-suicidal wild man's death defying stunt remains to be known. The climber has told police that his name is "Steve" and he is from Virginia.

After an hours-long standoff, police finally managed to pull him inside the building through a removed window on the 20th floor.

​It remains unknown whether the wild man is climbing the side of Trump Tower to commemorate the candidate's visit to his home state of Virginia or whether this should be interpreted as some sort of endorsement of Donald Trump.

What's the Difference? Neither Clinton, Trump Will Be on the Working Class' Side