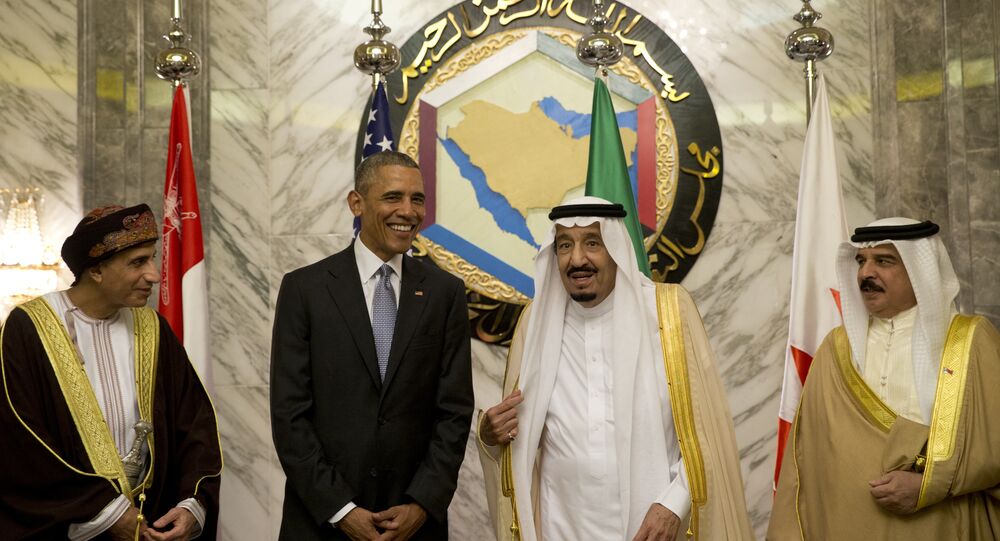 The Obama administration’s troubling arms trade and military relationship with the oppressive regime is being questioned by the US Senate, but a change in policy is unlikely.

On Wednesday, a bipartisan group of US Senators called on the State Department to reconsider military aid to Bahrain, citing the deteriorating state of human rights in the country following an escalation in crackdowns against pro-democracy demonstrations that have been ongoing for five years.

The letter, from Senators Marco Rubio (R-FL), Chris Murphy (D-CT), Ron Wyden (D-OR) and Tim Kaine (D-VA) comes in the wake of a June 21 State Department report to Congress that blasted the Bahraini monarchy for its wanton aggression against peaceful civilians.

"The lack of due process and the criminalization of the exercise of free expression continue to undermine the progress Bahrain has made since 2011," said State Department spokesman John Kirby after fielding questions about the United States’ stance towards the Bahraini government.

The monarchy has moved in recent months to outlaw the leading Shiite opposition party, al-Wefaq, by freezing its assets, imprisoning and torturing its members, and doubling the prison term for the party’s secretary general, Ali Slaman. He will now serve nine years in prison for "promoting forceful change of the political regime."

While the US State Department has rhetorically savaged Bahrain’s regime for its acts against peaceful opposition members, the Obama administration continues to funnel heavy weapons into the Middle Eastern country. Many of these are used against the country’s citizens.

The situation has deteriorated in Bahrain to the point that the monarchy has openly welcomed the Saudi government to intervene against the civilian protesters. It has also asked Takfiri Islamists, including members of Daesh, to kill demonstrators these radical Muslims view as apostates.

The United States renewed the sale of heavy weaponry to Bahrain in 2012 using a loophole to circumvent US law prohibiting the sale of arms to human rights abusers during the early phases of the pro-democratic uprising in Bahrain despite swelling reports that weapons were being turned on peaceful protesters. The renewal came after a less than one-year move to reduce US arms sales to the Bahraini monarchy. Then-State Department spokeswoman Victoria Nuland said Bahrain is "an important security partner and ally in a region facing serious challenges."

Bahrain has received nearly $50 million in US aircraft, ships, bombs and heavy weapons since 2012, that have been used to put down peaceful domestic dissent. The State Department continues to embrace a policy of looking the other way.

On Wednesday, Loud & Clear’s Brian Becker sat down with Massoud Shadjareh, founder of the  Islamic Human Rights Commission, to discuss the troubling developments in Bahrain and whether there is any hope that the US may finally live up to its mantra of promoting democracy.

​"Even before the Arab Spring, we saw the majority of Bahrainis asking for more empowerment and democracy to be brought to Bahrain," Shadjareh said. "Bahrain is a dictatorial monarchy ruled by a royal family with absolute power. Really when you look at the whole situation in Bahrain – first it is a very small island and 97% of its coastal land belongs to the royal family such that they claim that the fish in the sea belong to them. So what we are talking about is an oppressive regime."

"At the time of the Arab Spring, the Bahrainis took to the streets like the rest of the people in the Middle East calling for more democracy, but they didn’t want to overthrow the government and the royal family," explained the activist.

"They were asking for democracy combined with the monarchy, where the monarchy would be the figurehead and the democracy would run the affairs of the society," he said.

Shadjareh explained that the monarchy did not take to this proposition lightly, immediately resorting to police and military force.

"The demonstrators continued their peaceful protests. And now we have over five years of demonstrations by the majority of the country and everything has been used against them," Shadjareh said. "They have been tear-gassed, killed, and tortured systematically, which has been documented by a number of human rights organizations and now the [US] State Department."

"What is really worrying is that in the last month or so we have seen a huge escalation by the regime against the pro-democracy movement," the activist added. "Human rights activists have been arrested, the opposition party has been announced illegal, and now we have the removal of citizenship being used as a tool against the people of Bahraini society."

"This shows that the Bahraini government has no intention whatsoever to find a settlement between itself and the majority," he said. "They are actually pushing that whole society towards further conflict. We are all worried that after five years an escalation of the scale that we are seeing means that the only result would force the democracy to take arms, there is really nothing left for them."

"What we see with the Royal family is that they have actually imported the Takfiris, who identify the majority of Muslims as non-Muslims, to justify killing them and torturing them," Shadjareh said.

"They bring in people like that from different parts of the world and give them citizenship to help oppress the citizens of their own country and to change the dynamics of democracy across the region. This has been documented by the United Nations," he said.

Are the US and Britain aiding in the oppression and slaughter of Bahraini civilians?

"The reason why the United States and Britain are not really dealing with the support of the pro-democracy and standing up against this systematic oppression and torture by the government is because the United States has its fleet in Bahrain and Britain has just negotiated to have a military base in Bahrain," said the activist.

"Children are being tear-gassed and bombs that have been given by the United States and Britain are being used against the people, and now Saudi Arabia is invading Bahrain in order to oppress the people. Here you are inviting another government to go against the pro-democracy civilians who are standing in the streets and are asking for nothing other than a right in choosing the future, and the United States and the West are helping and supporting them with arms and giving them respectability," he said.